The Gospel According to Dam-Funk

A true believer in the power of music to change and, yes, even save lives 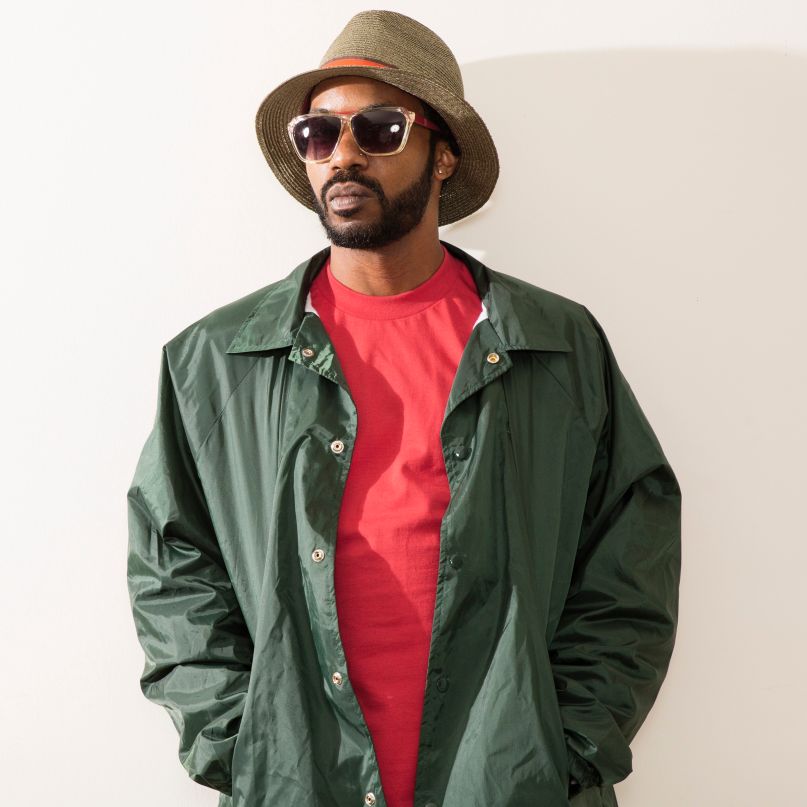 Component is a section of Aux.Out. for one-off pieces, special editorials, and lost orphans of the music discussion. Today, Gary Suarez meets Dam-Funk to discuss the musical, personal, and metaphysical origins of his work.

It’s not all that surprising to find Dam-Funk, aka Damon Riddick, wearing sunglasses indoors in the bustling lobby of Brooklyn’s Wythe Hotel. A Google image search reveals his propensity for shades, often fashionable ones, in public. Whether he does this for sartorial purposes, a sensitivity to light, or some psychological reason, probing the man known as Dam-Funk on matters of eyewear seems far too trivial given the importance of his message.

“We all are inherently born good,” Dam says as I look at my reflection in his obsidian lenses. “Sometimes you’ve got to tap into that memory to know that it’s OK to try and live your life in a better way.” He’s a man on a mission, in the spiritual sense of the word, a true believer in the power of music to change and, yes, even save lives. He speaks about funk with a mixture of evangelical zeal, passionate poetics, and low-key charm. The way Dam describes Invite the Light, the first proper Dam-Funk album in nearly six years, implies restorative, almost zen characteristics. “We go through dark periods,” he says. “The key of this record is to know that you can experience life and try to keep a positive agenda — but sometimes you might have to fight.”

It’s very tempting — a persuasive pitch, really. Or maybe that’s just the piped-in Cinnabon-like smell of the new album marketing cycle. It’s easy to get cynical in this line of work, looking too closely past the pleasantries afforded to our roles, interviewer and interviewee, such useful cogs in a promotional machine. But damn it, I want to be convinced sometimes. I want to be converted, to have faith in something in a world inundated by secular cynicism and kneejerk outrage. It’s perhaps the same disenchantment that drove reality-mugged leftists like Irving Kristol and Norman Podhoretz away from the liberal left and into the Judaic vanguard of neoconservatism. And if that analogy sounds overwrought, you probably haven’t heard Invite the Light.

Dam’s earliest work for Stones Throw Records took liberties with classic electronic sounds and old-school gear. A 2008 installment of the label’s DJ-friendly series, his radical Rhythm Trax Vol. 4, often sounds outside of time, or at least adjacent to it. One could reasonably draw parallels between his left-field funk and the far-out work of his contemporaries in the beat scene like Flying Lotus, Onra, or Ras G. Dam’s hip-hop bona fides, after all, were already well intact by then, having previously worked with West Coast rappers MC Eiht and Mack 10. He even appeared on the soundtrack for No Limit’s 1998 comedy I Got the Hook Up. “It was on a track [‘Bang or Ball’] for the Road Dawgs,” he says, referring to the Naughty by Nature-affiliated duo of G-Luv and Swamp Rat. “I played keyboards and stuff on that.”

His subsequent work as Dam-Funk placed an increasing emphasis on the latter half of his pseudonym. 2009’s full-length Toeachizown outed him as a full-blown boogie maestro, singing through echo boxes and vocoders over sparkling synthesizer melodies and clapping drum machines. Though at the time that found him lumped in with nostalgists like College and Kavinsky, the album was undoubtedly more Marvin than Moroder. To that point, Toeachizown felt like an intrinsically American record, one that recalled not just buried pop history but an overlooked part of black history.

Learning the truth about funk requires more than a few paragraphs buried in an article or a few cleverly curated playlists. This music is meant to be experienced, not merely absorbed. Unfortunately, certain barriers to entry stand in the way of fully appreciating the genre’s breadth and depth. Following the groundwork laid by James Brown, 1970s R&B groups like Sly and the Family Stone, The Ohio Players, and the Parliament Funkadelic family largely characterizes what the layman considers funk.

Yet the genre’s boundaries aren’t quite so contained. Disco, for example, depended a great deal on funk, which created a logically inextricable though often overlooked connection between the styles. While many of the faces at Studio 54 were white, the music was principally black, with singers like Gloria Gaynor, Donna Summer, and Luther Vandross carrying the tunes everyone danced to. Unfortunately, the disco backlash of the late 1970s lumped a lot of related musical styles in with it, compelling industry reclassification of subsequent music as dance or some more agreeable variant of R&B.

Though his love for funk, the music he grew up on, is a holistically inclusive one, it’s that underrated period in the 1980s that Dam most publicly adores. To this day, he’s drawn to “the chords, the structure of the songs, the imagery, and the way it was engineered.” A great deal of this material remains regrettably forgotten, not to mention out of print. As such, his Twitter account — a logical extension of his mission in the social media era — regularly features YouTube videos of music from this time, from D Train’s quintessential boogie anthem “You’re the One for Me” to Steve Arrington’s inspirational single “Nobody Can Be You”. (In 2013, Stones Throw released Higher, a brand-new album of originals from Arrington with music by Dam.) Those lured in by these online teasers would do well to check out Funkmosphere, the funk-worshipping weekly party Dam oversees in Los Angeles on Thursday nights.

Our very definition of funk has been warped not only by the passage of time but also recent events. Two years ago, Bruno Mars, Pharrell, and Robin Thicke were retrofitting its sounds to meet the specs of modern pop. Though they certainly weren’t the first to do so this side of the millennium, their commercial successes surpassed those of comparatively underground purveyors like Jamie Lidell, Thundercat, and, of course, Dam-Funk. It took nearly 20 years for the promise of Daft Punk’s “Da Funk” to pay off via the nu-disco mega-hit “Get Lucky”, and now everything was funky.

That word, a reductive descriptor used to categorize the tangible and intangible aspects of music, had already been overused to begin with. Before long, the term spread like a weed, with listeners and critics steadily eroding its meaningfulness by affixing it to just about any pop song to which it might even remotely apply.

Clearly influenced by The Gap Band and Prince, Mark Ronson’s “Uptown Funk” seemed a bridge too far for many, including some of Dam’s associates. He’s not exactly unsympathetic to their grievances. “The last album they were doing an Amy Winehouse-type vibe,” he recounts. “Then all of a sudden they come out with a boogie joint.” Still, Dam’s attitude is accepting — provided those who appropriate from funk treat it with respect. “Different people have always crossed genres,” he says, citing David Bowie as one notable example. “It’s not a big deal.”

Here we begin to get to the earnest beating heart of Dam’s agenda. Despite the fact that his beloved genre has spent much of the past 30 years denigrated, abused, and misused, he believes in funk the way some people trust in scripture. If another musician wants to explore this music, even briefly, he doesn’t see the harm. “Myself, I just don’t choose to play with it,” he says. “I choose to take it serious.”

Fascinated by the sincerity of his case, I want to believe in what Dam is putting down. Still seated on opposite stools in the noisy lobby of this boutique hotel, I ask him what benefits people can get out of funk, specifically from his new album. “An out-of-body experience,” he quickly replies, which admittedly takes me out of the moment. Suddenly, I’m reminded of all the Scientological promises associated with Los Angeles, a historical landscape dotted with pop-up religions and smiling cult leaders. No e-meter could adequately register my disbelief. And still, I’m not dissuaded. Like so many before me, I’m searching for meaning in this world, and, to be honest, the other parts of his pitch make sense to someone who’s regularly moved by what he’s listening to.

Whether or not it takes you to another plane of existence, a front-to-back listen to Invite the Light presents an accessible, even empathetic narrative to follow. Dam’s lyrics are far from preachy, though at times perhaps too bromidic for skeptics. While the album is undeniably personal, he explains, “I tooled the record where it’s not just about me me me but about how other people in general can relate to certain topics on it.” Such relatability is paramount to his movement. When he sings the titular hook of “I’m Just Tryna Survive (In the Big City)”, he switches from first-person to second-person against a backdrop of social media-enhanced living.

Yet the first voice you’ll hear on Invite the Light belongs not to Dam but to Junie Morrison. A key member of both Ohio Players and Parliament-Funkadelic, he breaks through the radio static to deliver “Junie’s Transmission” with cosmic urgency. Dam speaks of the man with reverence. “It’s just an honor to have him on,” he says. “It really showed me I’m doing something right out here.”

Morrison, whose 1980s solo output clearly imprinted upon the Dam-Funk sound, is only the first of a handful of notable artists to accompany Dam on the album. The eclectic guest list includes Ariel Pink, Flea, and Q-Tip. On the g-funk reprise “Just Ease Your Mind from All Negativity”, he reunites with Snoop Dogg, who he worked with on 2013’s 7 Days of Funk mini-album.

While proud of all of the featured contributors, Dam feels especially pleased with the virtual family reunion he’s accomplished. It stems back to his days working under Leon Sylvers III, the in-house producer behind some of the biggest and most notable albums in the SOLAR Records discography. During the 1980s, the label was home to Midnight Star, Shalamar, and The Whispers, to name a few of their artists in the post-disco heyday. Throughout his tenure there, Sylvers made numerous hits with SOLAR acts, as well as a daughter with Shalamar singer Jody Watley. Both artists appear separately on Invite the Light, as does another of Sylvers’ children, Leon IV. “I wanted to make sure that I could create peace, if there was any peace to be made,” Dam says. “It’ll be a kick to know how they listen to this.”

While some might call this sort of thing a stunt, that would be a gross misinterpretation of Dam’s motives. He’s designed a funk album as something more than a great listening experience, but as a practical tool for empathy. “It’s not just a party,” he insists, “Not just house-party-backyard-fuckin’-boogie. It’s real stuff that we go through.” Over the course of its somewhat loose conceptual arc, as the album tackles the emotional subject matter of relationships, breakups, and beyond, Dam transcends the retro opportunism of the dabblers and fetishists.

He’s leading a humane movement, one that seeks to unite amid rampant division. None of us are truly alone, and if we want, we can live the lives we want to live by working through our shared pain. “That’s why I call funk ‘a smile with a tear,’” Dam says.

At long last, I understand why he wears the sunglasses.

Gary Suarez is a writer born and raised in New York City. He tweets.