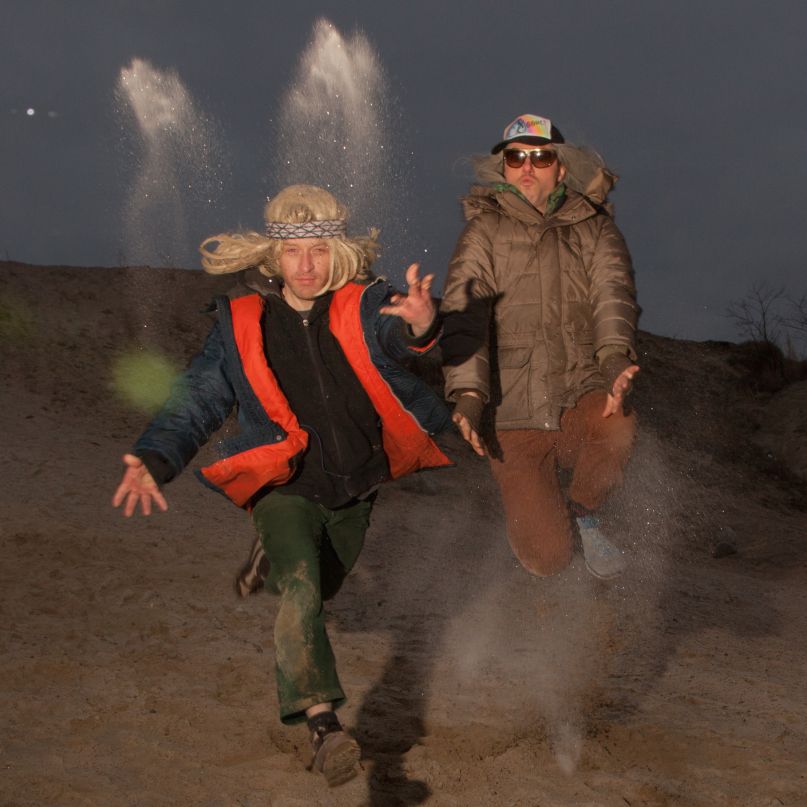 Component is a section of Aux.Out. for one-off pieces, special editorials, and lost orphans of the music discussion. Today, Robert Ham speaks with Lightning Bolt’s Brian Chippendale about his band’s knowing push out of the underground.

When you grow up as a pop culture fanatic, you start to recognize that point in your adulthood when your fellow music junkies find themselves in positions of power. You start to hear prog rock in action films, punk rock advertising luxury cruises, and even the most left-of-center acts get taken seriously in corners of the media world that might have ignored them a decade earlier.

That time has come for fans of the powerhouse bass/drums duo Lightning Bolt. Even in our content-hungry world, there’s something uniquely and wonderfully perverse about clicking over to Rolling Stone to find an interview with drummer/vocalist Brian Chippendale and bassist Brian Gibson or being able to hear their loud, brash noise rock through NPR’s media player.

“The NPR [stream] is the weirdest one because that’s one step away from my parents just hearing about it on their own,” Chippendale says with a laugh. “They cast a wide net. I wonder if that brings people into some shadowy corner of their website that they wouldn’t go otherwise. It’s really weird, though. ‘Our album stream is debuting on NPR?’ OK…”

The added attention, even via some of the biggest news and culture organizations in the US, befits the mood surrounding the band’s latest album, Fantasy Empire. Almost everything about the presentation of the record feels different from any of Lightning Bolt’s previous work.

After releasing their LPs on Providence mom-and-pop label Load Records for the past 15 years, Lightning Bolt have moved to Thrill Jockey, the venerable indie label whose imprint carries with it no small air of prestige. With that, the band is going through the typical cycle of touring after Fantasy Empire’s worldwide release rather than their m.o. of touring for a long time with the goal of banging new material into shape and recording a new album once home in Rhode Island. Even the artwork of Fantasy is a bold shift away from Chippendale’s usual “box of crayons, over-the-top style,” as he puts it. The cover still ain’t pretty, but it’s covered in various dark shades of blue depicting what looks like a melting, morphing woodland landscape.

The shift that everyone seems to be talking about with the band, though, is a sonic one. Initial sessions for the album were started, as usual, in Lightning Bolt’s rehearsal space. But after hearing the results, the two felt that as great as the songs were, they were stuck in a kind of rut.

“It was this weird, long road,” remembers Chippendale. “We just decided that it needed something more.”

The pair decamped to Machines with Magnets, a studio just outside the band’s hometown of Providence where they re-recorded everything and sometimes revamped the original versions to fit this new, cleaner sound. I say clean, but Fantasy Empire is still as gristly as fans are used to hearing from Lightning Bolt. Things are just much more in focus now. Gibson’s bass punches instead of smears — even the fuzzed-out swirls he plucks out on “King of My World” and “Dream Genie” feel frighteningly present and enveloping — with much more attack behind his driving rhythm/lead lines. Chippendale’s drumming, already a potentially bone-cracking assault, also has added bite.

What didn’t and likely will never change is Chippendale’s vocals. The 41-year-old is still using his same phone receiver microphone and effects pedal setup that makes it sound like he’s straining to be heard through a mouthful of gauze. His lyrics never quite float to the surface, but that’s precisely the point.

“If I elevate it to be an equal player with the drums and bass, it almost takes away from those instruments,” he says. “The focus needs to stay on the loud musicality in that realm. I really don’t want to step into the world of storytelling. That’s prioritizing something else, something less primal. We try to keep it primal. There were drums before there were words.”

The feeling surrounding Fantasy Empire is that the Brians consider it long past time for them to make a more dedicated push out of the underground. There have been steps in that direction along the way. The band’s comings and goings are reported with regularity here and on sites like Pitchfork and Tiny Mix Tapes, they’ve been a regular presence at festivals like All Tomorrow’s Parties and Primavera, and in 2011 they recorded a uniquely fucked-up EP with The Flaming Lips. They’ve also been name-checked by everyone from Björk (with whom Chippendale played on the album Volta) to Muse.

But with the new label putting all this energy behind promoting Fantasy Empire and a booking agent that has, over the last few years, been scoring them plum gigs away from the basements and art galleries where they used to stage their performances, Gibson and Chippendale seem poised for a small leap toward even wider recognition. If that means abandoning their standard for playing live — setting up their instruments on the floor of the venue rather than the stage and let the audience encircle them — so be it.

“We’ll still do that as much as we can,” assures Chippendale, “but if the space is too big or too weird and the bulk of the people will have a muffled, trampled, non-musical experience, we’ll be up on stage. We’re just trying to make sense of it and not be very stubborn about something like that. I really wish we could do that forever. I wish I could be 20 forever, but as you get older, it gets tough.”