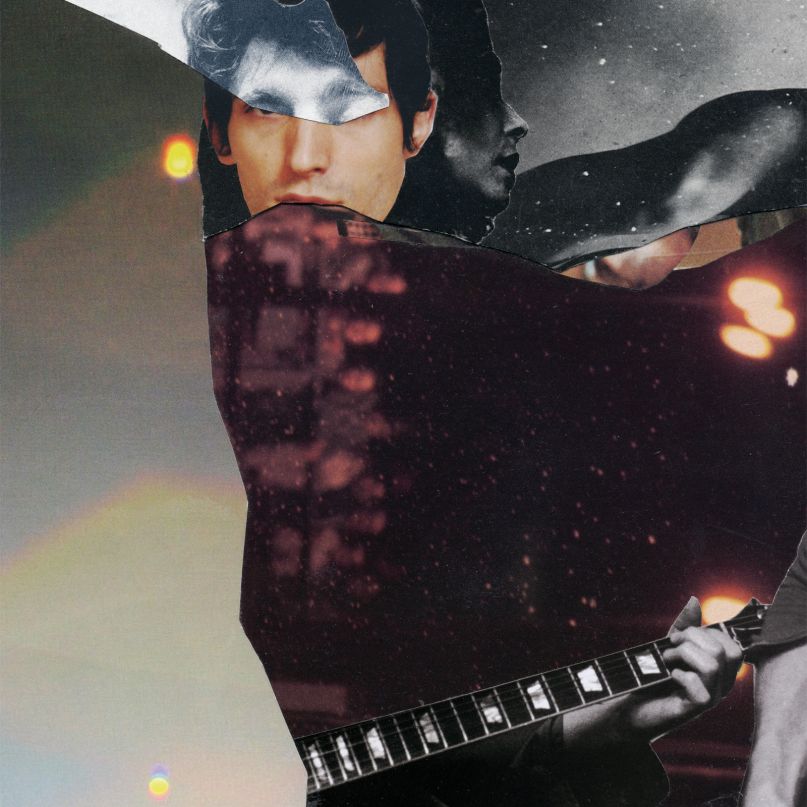 Sensible Nonsense is a column from Robert Ham taking us into the less-explored terrain of experimental music, giving us either a lay of the land or a map back home. This month, Ilyas Ahmed is profiled, speaking of life as a perpetual outsider, and thriving by remaining disconnected.

Most every artist who makes experimental music will tell you of the disconnect they felt from their peers growing up — their interests in culture almost never aligning with those of the majority. That feeling of abstraction only grows stronger when other elements get added into the mix: a physical disability or, in the case of Portland-based guitarist/sonic explorer Ilyas Ahmed, the knowledge that you were adopted.

Born in Karachi, the most populous city in Pakistan, Ahmed was just three months old when he was brought to the U.S. by a welcoming couple who are the only parents he’s ever known.

“There’s no real way of knowing what my genealogy is,” the now 40-year-old musician and artist says, sitting outside one of his hometown’s many bustling coffee shops. “I’ve thought about doing that thing where they track down that information for you, but I’m also freaked out about what that might turn up.”

Growing up in suburban New Jersey, Ahmed couldn’t help but stand out from the rabble in many ways: olive skin, prominent nose, gangly frame, and a tongue-tying name. Rather than try and assimilate in some way, though, he stood his ground and defined himself by standing in opposition to wherever the tide was turning. It’s an attitude that he seems to still carry around with him, looking at the current pop music landscape and finding almost nothing to connect with or even ironically appreciate.

“When I was in my early twenties,” he says, his eyes tracking the cars buzzing by on this busy street, “that was the post-Nirvana environment when it was really hip to get into 20th century composition and free jazz and noise. Anything that wasn’t pop at all. I meet 20-year-olds now and their favorite band is The War on Drugs. Not to denigrate that band, but … really?”

The music that Ahmed has made over the years has shared a feeling of being unmoored from the world. Even at its most accessible, such as his bluesy, Neil Young-like Goner, the 2009 album he released on Root Strata, the songs carry a spectral quality, emphasized in dexterous and knotted-up acoustic and electric guitar work and vocal lines that are a soupy fog of melody and effects-pedal haze. It’s psychedelic music free of the needlessly trippy imagery and zonked-out philosophy.

More recent efforts, particularly the two albums he has recorded for Immune — 2012’s With Endless Fire and I Am All Your Own, released in late March of this year — have found Ahmed coming back down to Earth a bit. Mirroring the ideas found on the most-recent album by his friend and sometime collaborator Liz Harris (aka Grouper), his vocals and lyrics are becoming much clearer, expressing some strains of mental anguish and wonder at the strange, potentially devastating path our planet seems to be on.

“I have a new respect for my voice that I didn’t have before,” Ahmed says of this new turn toward clarity. “Part of it, too, is that you just get tired of doing it the same way. How often am I going to be the person who moans into a delay pedal? You have to evolve, or you’ll be stuck. Of course, tomorrow I’ll probably put the delay pedal back on.”

When you find yourself feeling completely at odds with the rest of the world, there’s also a tendency to hold on tightly to those people you do find connection with. Ahmed doesn’t explicitly discuss this, but it’s telling that his best friend in kindergarten is still his closest confidante. And the relationships that he has built with other musicians have tended to be really tight-knit and inspiring. That comes across in his work with Harris, but the feeling is even deeper in his collaboration with Jonathan Sielaff and Matt Carlson, the members of Golden Retriever.

For the past few years, the three have been recording and performing live under the name Dreamboat. And the results of their work are breathtaking, with Ahmed singing and playing guitar, Carlson teasing out round, billowing melodies from his modular synth setup, and Sielaff adding texture and definition by running a bass clarinet through a few effects pedals. It’s swoon-inducing stuff that recalls the lovelier moments of the late ‘60s/early ‘70s Canterbury scene from the UK.

“I don’t mean this in a boastful way,” says Ahmed, “but there’s nothing I can place my finger on to describe what it sounds like. With bands now, a lot of times there’s a really digestible reference point. It sounds like the Stooges or garage rock with a capital ‘g.’ But friends of mine that I’ve played our stuff for or have seen us, tell me they haven’t heard anything like it. That’s really exciting to me.”

If there’s any single benefit to be had from feeling disconnected from the world at large when you’re at artist, it’s knowing that you can pretty much go anywhere with your creative work. You’re not beholden to any trends or sales figures or outside opinions. Your muse is your only guide.

For Ahmed, he expresses that idea by thriving on being, as he puts it, “uncomfortable.” That’s part of what led him to start easing up on sending his vocals through a bank of masking effects. He needed to challenge himself to move past what he had done before. This got us to talking about comedy and how most well-known stand-ups hone their material for months before recording it for posterity on an album or as part of filmed special. Once that is done, they scrap those bits and start all over again.

“It’s like a song versus playing improv,” Ahmed says, picking up on the thread. “I was thinking about this recently because a friend sent me a link of Future Islands playing on Letterman. I was like, ‘This is insane. I can’t tell … what the fuck?’ It was obviously awful, but … kind of cool? Then I watched some other clips, and he’s doing the exact same thing. I was so bummed out by that. I shouldn’t be surprised by that, but I was so disheartened. It was the exact same gestures.”