Hutch and Kathy: “You Can Always Go Back”

The Thermals on their first band, the importance of Green Day, and the trouble with harmonicas 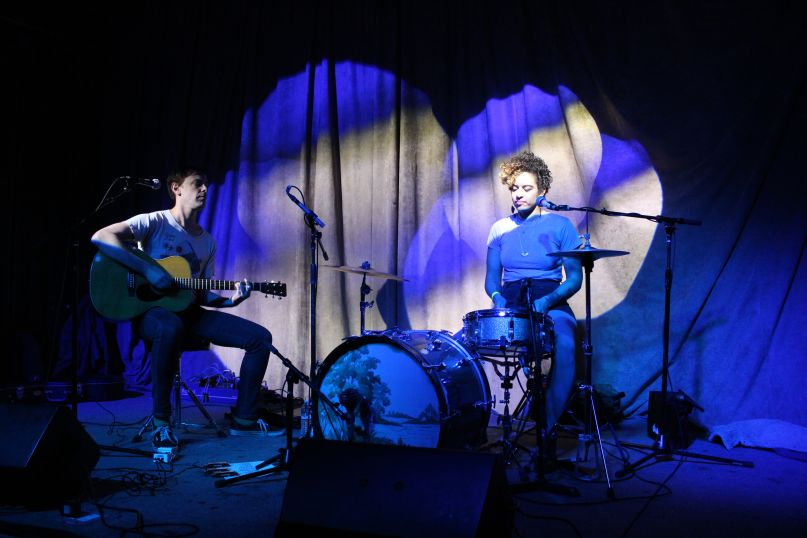 Component is a section of Aux.Out. for one-off pieces, special editorials, and lost orphans of the music discussion. Today, Zack Ruskin meets The Thermals’ Hutch Harris and Kathy Foster at the beginning of their tour as duo Hutch and Kathy, where they revisit music made 13 years ago and grow nostalgic for the spirit of their early days.

With three hours to go before they take the stage, Hutch Harris and Kathy Foster are sitting in their van, a Chevy they bought in 2002, and telling me why now, 13 years after its release, they’ve decided to tour behind their album Hutch and Kathy. The idea to press Hutch and Kathy, the group’s folk-pop debut, to vinyl came from Rob Jones, whose label, Jealous Butcher Records, originally put the album out. “He just got the idea to repress the record for Record Store Day,” Harris remembers. “I had always wanted to, but [Rob] just didn’t have the money when it first came out. He got in touch last year and said we should do it for Record Store Day, so Kathy and I decided we might as well tour.”

Harris and Foster are no strangers to the road, having played extensively as the punk trio The Thermals with a rotating drummer in tow. But in electing to mount a small tour under a different moniker, the two were required to dust off a tracklist that hasn’t been in regular rotation since they toured across the country in Harris’ Carolla on a DIY-style itinerary in 2002. It was in the midst of this tour that Harris received an email from Subpop expressing interest in the Thermals demo he’d recorded on his own after completing the Hutch and Kathy album.

“I thought it was a joke at first,” he admits, twisting around from the driver’s seat in front to confess that while he had in fact recorded every part of the Thermals initial album, the brass at Subpop were under the belief they were negotiating with a full-fledged band. “Subpop asked if we could play for them in Seattle, and I was like sure…, but we didn’t tell them there was no band. We were like: we need to make a band soon! It was less than a month before we went up and played for them.”

But before there was The Thermals, there was Hutch and Kathy, the first partnership between Harris and Foster, whose romantic relationship had ended only a year prior. Foster recalls getting “super emotional” when she first revisited the tracks for their current tour, explaining: “It takes me way back in time, in so many ways: thinking about our relationship, playing music and recording all the time, how different Portland was.” Harris calls the lyrics on Hutch and Kathy “more personal than any of the Thermals records.”

The songs that encompass Hutch and Kathy were recorded over the course of a year, with Harris and Foster going back and forth to each other’s houses with half-inch, reel-to-reel eight-tracks. “There was no label, so there was no deal, so there was no rush,” says Harris, comparing the “meticulous” process of those recordings to the lightning fast, one-day turnaround it took to put The Thermals’ first record together. “We took so long making the Hutch and Kathy record that I really wanted to do something that was like make a song a day. For the most part, it was just one day spent on each of those songs. It was nice to make something super fast and loose.”

Later that night, the band has traded the intimacy of their van for the intimacy of the stage at the tiny Brick and Mortar Hall in San Francisco. Harris and Foster mingle with the crowd before their set, running into friends for what is a de facto hometown show. Foster was raised in Sunnyvale, while Harris grew up in San Jose. They recall many trips up to the city, where seeing live music was always the top priority. “Starting in high school, I would take the train up here with my friends,” remembers Foster. “We saw hundreds of shows. We always went to Gilman and Slim’s.” Harris perks up at the mention of the latter venue and explains that while for many bands playing San Francisco’s legendary Fillmore would be the ultimate success, for The Thermals, it was definitely Slim’s.

In speaking with the band, it would seem that the legendary 924 Gilman is a home away from home too. Foster recalls seeing Green Day many times there. The conversation turns to Green Day, who unbeknownst to us, will play a secret show at the Gilman, their first sanctioned gig at the venue since being banned in 1994, in four days. “We’ve been listening to the first couple of Green Day records a lot,” she adds. The day before, as the duo drove down from Portland for tonight’s show, Harris tweeted, “Kathy and I just sang along to every word on Kerplunk and Dookie.” When asked if those records have always stuck with the band, the answer is immediate and definitive. “Always, always. Yes.” Harris confirms. “For every record we make, when we’re looking for something that’s an example of an all-around good record, we always go to Dookie. The recording is so good. The attitude is so good.” Foster elaborates on the sentimental value Green Day’s music holds for her. “You know how you always have a soft spot for the music that meant a lot to you in high school? You can always go back and still love it.”

Another group that comes up in conversation is Neutral Milk Hotel, whose influence can be heard on Hutch and Kathy’s first album. Harris has ties to the Elephant Six collective, having played drums for The Minders while on tour with Elf Power. When the connection to Neutral Milk Hotel comes up, Foster is quick to point to the band’s first album [1996’s On Avery Island] as a record that inspired Hutch and Kathy.  When informed that Neutral Milk Hotel’s final scheduled show, which may likely be their last, is set to take place at the Phoenix, a rundown little slice of music history north of San Francisco, Foster is slightly incredulous. “Really??” she asks, before Harris recalls that the Phoenix was once featured in the music video for Primus’ “Jerry Was a Racecar Driver.”

Hutch and Kathy walk their talk by including a cover of Green Day’s “Words I Might Have Ate” late in their set. The song fits well into their setup, which features Harris on an acoustic guitar and Foster behind a drum kit. The tracks they play from the Hutch and Kathy LP are a marked departure from the frenetic bass and brash guitar work The Thermals are known for. In their place are simple harmonies, heartfelt lyrics, and yes, even a harmonica. Harris feels obligated to comment on the harmonica neck harness he takes the stage with one song into their set, telling the crowd, “No one looks cool with the harmonica thing. Well, except Bob Dylan.”

Harris and Foster don’t come across as people who are terribly concerned with how cool they look, doing a fine job of letting their music do the work for them. But in acknowledging that their show will probably have many family and friends in attendance, they both admit that playing in front of people you know can be a little awkward. “It’s nice when your friends come,” says Harris, “but if I could choose, I would always have a crowd of strangers. It can get in your head, where you’re up there trying to be cool, but these people that know you, they know I’m cool. They know.” Foster agrees, adding, “It can be hard to let yourself be yourself on stage in front of people you know intimately, because you can be a totally different person [up there].”

The crowd receives them warmly all the same, cheering loudly when the duo cover Thermals songs like “Now We Can See” and “I Let It Go”. There is something immensely comforting in watching a band that has found success and established a following choose to forgo the easy path and instead drive around in their decade-old van to play old songs to small crowds. Harris and Foster have a natural comradery on stage, teasing each other one moment and bonding intently over the music the next. After Harris remarks that his harmonica playing reminds him of the Roseanne theme, the two launch into a spontaneous five-second cover, complete with Foster on shakers. It’s a brief moment, but it says everything you need to know about this band. They’ve been around for over a decade, making all kinds of music, but almost always making it together. They have plans: there’s a new Thermals record they expect to have out next year (“It’ll be fucking time,” says Harris), and they’re also considering recording another Hutch and Kathy album.

“We want to make a Bedhead-style record,” says Foster.

“Something quiet and shoegazey,” adds Harris.

The two share a nostalgia for the process that lead to Hutch and Kathy and sound eager to once again experience it. “With the Hutch and Kathy songs, you’re able to really produce them,” explains Foster. “We put all these little sounds in, keyboard and shakers, different things here and there. That would be fun again, to spend that kind of time on a record. With the Thermals, we try not to do too many things that we can’t replicate live with a three-piece band. So it would be fun to not even think about that at all and just play all kinds of fun stuff.”