Brown and Smart: How Downtown Boys and Heems Are Claiming Space in American Music 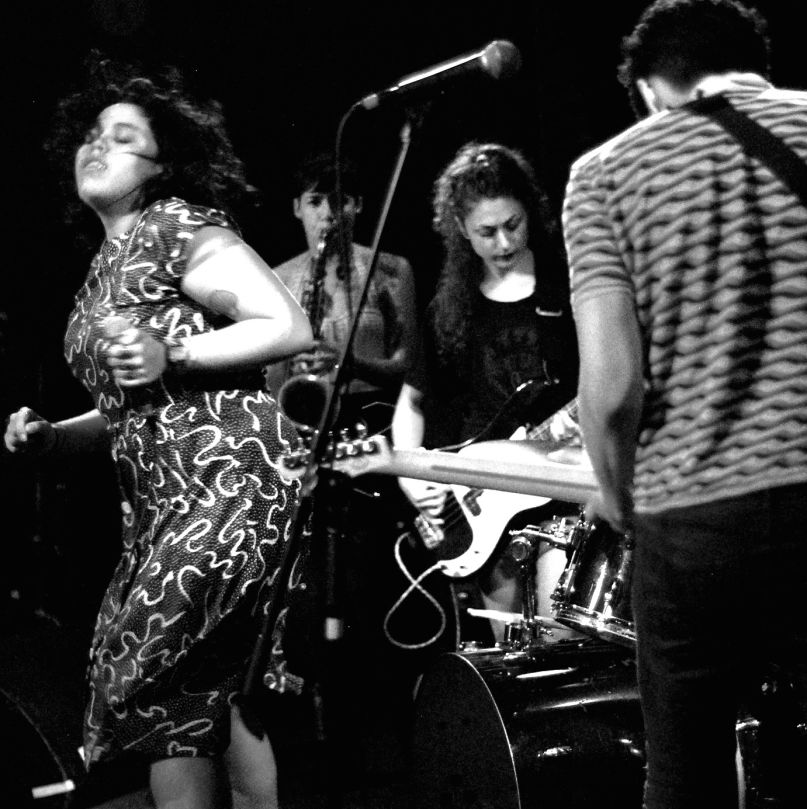 Component is a section of Aux.Out. for one-off pieces, special editorials, and lost orphans of the music discussion. Today, David Sackllah relates his own experiences of growing up “brown” in America to the music of Downtown Boys and Heems.

I am one-sixteenths Irish. To be fair, it’s a largely irrelevant aspect of my genealogy. Not much is known about my great-grandmother’s father other than that he was a full-blooded Irishman. One-sixteenths doesn’t really mean much of anything, but as a child, I wore it as a shield. The other portion of my genetic breakdown is comprised of Palestinian and Lebanese descent. As a child, it became tiresome to explain where those places were on the map to the other kids at school, most of whom were white. The answer to the question “What are you?” would always end with me pulling out that sliver of Irish to emphasize that I wasn’t completely different, that I wasn’t completely brown.

I was fortunate to grow up in a community with a great number of people of Arab and Asian descent, but it often led to an us vs. them mentality. You were either considered brown, and “other,” or someone who was “white on the inside” and could be accepted. On “Monstro”, the lead single of Downtown Boys’ excellent debut album, Full Communism, singer Victoria Ruiz directly addresses this struggle. The opening to the track is introduced by a 12-second speech titled “(Brown and Smart)”. When played into “Monstro”, the whole speech reads as follows:

Ruiz, a Mexican-American, wrote this speech, and it ended up leading to a bit of a self-fulfilling prophecy. The lyrics to “Monstro” are mostly in Spanish, which led to a Pitchfork review in which the author, Mike Powell, wrote, “My Spanish is shot, but I figure Victoria Ruiz is meant to be understood better through her energy than her words anyway.” The band spoke out against the review on social media; because the medium wasn’t English, the band’s message in the song got lost in an infrastructure that didn’t quite acknowledge it.

American music writers seldom branch out to cover artists who sing in languages other than English. A handful of artists, like Omar Souleyman, The Very Best, and Ibeyi, receive attention, but they are often treated as outliers. In punk, there are plenty of artists besides Downtown Boys who sing in Spanish, such as Vaaska and Criaturas from Texas, Juanita y Los Feos from Spain, Xibalba from Mexico, and Rakta from Brazil. Around the world, there are pockets of bands finding adoration and acclaim from English-speaking audiences, expanding on the idea of music being used to reclaim a brown identity, refusing to be put into any kind of box.

With a heritage from a different side of the world, Punjabi-Indian American Himanshu Suri’s first solo album as Heems, Eat Pray Thug, also directly confronted issues of owning that brown identity in a post-9/11 New York. He talked about his family and others like him rushing to buy American flags to prove that they were just like their neighbors. On “Patriot Act”, he says:

We ironed our polo shirts, and we combed our hair, and we proudly paid our taxes, and we immediately donated to a local white politician, and we yelled, “I’m just like you” as quietly and calmly as we could, so as not to raise too much attention and be labeled a troublemaker and lose one’s job.

On “Flag Shopping”, Heems uses the lines “They want a shorter version/ They want a nickname” to create a refrain about how his own name creates another barrier between him and white society. The entire album is full of identity politics, about existing in a society where being brown can lead to daily attempts to appease your neighbors into not being afraid of you. Suri explains how “Himanshu” became “Heems” so that his coworkers won’t think of him as “different.” This isn’t a phenomenon solely exclusive to brown people, as people of other races often have to present an “Americanized” name to the public so that they don’t make strangers or acquaintances feel uncomfortable. It’s a simple way to delegitimize someone and take away from their identity.

On a personal level, I can’t claim a great deal of discrimination throughout my life — less than a minuscule amount compared to people I know. What I have experienced are incremental amounts of erasure that add up to create this pressure of white hegemony. While music and its scenes can create a sense of community for outsiders, they don’t erase this. There are plenty of welcoming spaces for brown artists and audience members in indie rock and punk, but both genres are still primarily white. As for hip-hop, the fact that Heems is still labeled a “joke-rapper” more than six years after Das Racist’s novelty single “Combination Pizza Hut and Taco Bell” shows that people still have trouble taking a brown artist seriously in rap. Artists have to fight to claim that they belong in these spaces, and in doing so, they are opening the lane for more voices of different backgrounds to be heard.

Together, and along with other artists from cultures that get thrown into a label of “brown,” artists like Heems and Victoria Ruiz have created records this year that are standing up and owning that identity, portraying it proudly, exclaiming that they shouldn’t have to change things about themselves or look for a magic third quality that proves their worth. These artists are giving a voice to countless kids who don’t quite fit in among their friends because of their name, their identity, or the language they speak at home.