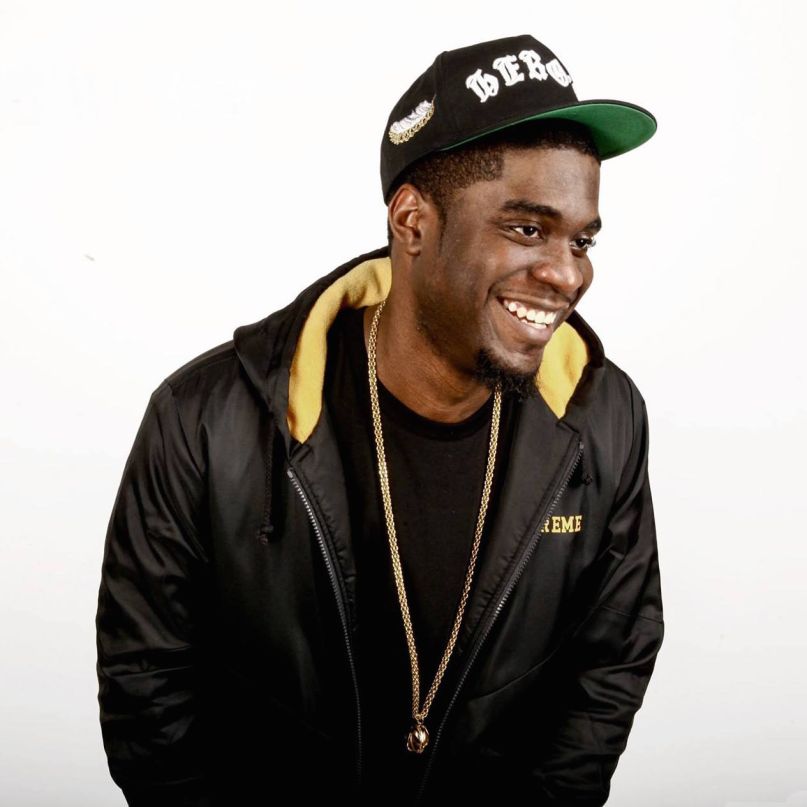 Component is a section of Aux.Out. for one-off pieces, special editorials, and lost orphans of the music discussion. Today, Alejandra Ramirez speaks with Big K.R.I.T about his album Cadillactica and his place in the tradition of intergalactic hip-hop.

“Do not attempt to adjust your radio,” says a faceless, sonorous, liquid-voiced DJ. “There’s nothing wrong.” This is the introduction to Parliament’s 1975 all-that P-funk album, Mothership Connection — or, as the voice calls it, “home of the extraterrestrial brothers.” What followed was a new era of music: funk that encouraged listeners to think and feel beyond their earthly existence. The Afrofuturist aesthetic of the ’70s was born. Instead of living in the worldly mess of disenfranchisement and oppression, a new Black art decided to go beyond that, to imagine and create new worlds.

Then hip-hop followed suit: In the ’80s, Afrika Bambaataa carried on the revolutionary torch of the cosmic funk with his 1982 hit “Planet Rock”, where, dressed in a half-robot, half-priest garb, he led a command for his followers to “socialize, get down, let your soul lead the way.” In the late ’80s, De La Soul presented the idea of the “D.A.I.S.Y. Age” (the acronym stands for “da inner sound, y’all”). In the ’90s, Big Boi and Andre 3000 became Atlanta’s aliens, with albums that repositioned Southern hip-hop as forward-thinking and really, really strange. Today, you have Janelle Monáe and Flying Lotus imagining a post-apocalyptic world through psychedelic imagery and utopian androids. The unknown, the future, and outer space have been constantly utilized as arenas of power and agency throughout hip-hop, and they are a focal point on Big K.R.I.T.’s 2014 album, Cadillactica.

“Yeah, man, even before Outkast,” says K.R.I.T. “There’s Roy Ayers, Parliament, George Clinton.” Space references aren’t new for K.R.I.T. His debut album, Live from the Underground, served as a Cadillac crash-landing on Earth; it was his metaphorical crash-landing into mainstream music. Cadillactica doesn’t venture far off, as the album cover nearly has him immortalized as a celestial deity. “The album talks about where the Cadillac spaceship came from, and ultimately it’s a metaphor for my thoughts and all my creativity,” says K.R.I.T. “The thing about the sky, stars, outer space, and the future is that there is a mystery to it all, and when it comes to my music, I don’t want you to know 100 percent where I’m going.”

This is probably why Cadillactica evokes a sort of psychedelic experience, and not in the sense of getting bugged out on acid. In a recent Flavorwire piece about Afrofuturism in the 21st century, Tom Hawking writes, “Art that does a good job of evoking the psychedelic experience is always fascinating, because the experience it’s trying to recreate is one that’s by definition deeply personal and impossible to capture.” Albums that evoke a psychedelic experience are also interesting in that they tend to juxtapose dark, real-life observations with fantastical ideas in an attempt to create a space void of societal ills. Cadillactica is personal in the sense that it’s deeply nostalgic, with K.R.I.T. praying for better times and creating a world of his own perfect devising.

While I’m talking with him, it all sounds, dare I say, mystical as I urge him to drift off to the headier reaches of his brain. This concept of mysticism transcends K.R.I.T.’s music, as Cadillactica found him stepping out of his comfort zone to make a truly original work. In an interview with RESPECT., he commented, “Your mind is abstract, your ideas are abstract, and I wanted to make my music seem a little abstract.” Cadillactica is reminiscent of Outkast’s Aquemini with a variety of psychedelic, futuristic sounds meshed with watercolor jazz and funk influences. Even “My Sub Pt. 3 (Big Bang)” and “Mind Control” have that deep Southern funk rooted in the days when Big Boi’s Speakerboxxx quivered in the woofer booms of rundown cars. But just like funk, Outkast’s music was unpredictable and evasive of even your wildest expectations. I would trace K.R.I.T.’s new direction to that unconventional urge in the spirit of funk. Just like Afrika Bambaataa’s “Renegades of Funk” and Sun Ra’s film Space Is the Place, Cadillactica travels across time and space to collide the past, present, and future. “Kreation” alludes to the beginning of time while K.R.I.T. plays God to give his planet heart. “Life” comments on how Cadillactica was “created within the history of the big bang, or what we like to call the 808.” “Lost Generation” alludes to the beginning of time while commenting on a lost generation: “We have to let them find their way, but we will create again.”

Outer space and the extraterrestrial have often allowed hip-hop artists to serve as ambassadors to the future and navigate a mothership, alien planet, or something “out there.” While Sun Ra worked in the spirit of a deep political freedom on Space Is the Place (where Earth wasn’t good enough, so he “set up a colony for Black people”), K.R.I.T. does so in the spirit of creative freedom. “Creating a planet gave me more freedom,” he says. “And the obscurity of my thoughts and creating a psychedelic experience of some sort gave me the ultimate freedom.” This is apparent when Cadillactica’s production ventures left field, at least for him. “Third Eye” and “Mo Better Cool” give off tranquil and soulful vibes that make you question why more music like this isn’t being made. The production on “Angels” has psychedelic guitar noodles and ’70s wah-wah that sound like the lovechild between a Parliament record and a Sly & the Family Stone B-side.

There is also a lot of soul-searching and spirituality on the record. Songs like “Saturdays = Celebration”, “Soul Food”, and “Third Eye” make Cadillactica play out like a nostalgic Southern tale: Sunday family gatherings, picture perfect scenes of “picket fences and children playin’ instruments.” These might be images we’ve seen before, but the storytelling and lyricism transcend trite anecdotes and overused metaphors. Through his in-depth storytelling, K.R.I.T. turns this extraterrestrial journey into a metaphysical journey of self-realization through the creation and destruction of Cadillactica.

It’s in these moments where you find K.R.I.T. at his most spiritual, tapping into something greater. “Yeah, man; it’s always been like that,” he says. “In funk there was always something greater worth searching for, and I try to do the same with my music. It’s not necessarily about being preachy.” Cadillactica is spiritual in the sense that it seeks to find some sort of release from the real world — to find solace in something bigger than Earth. Sun Ra spoke of this on Space Is the Place: “Planet Earth: sound of guns, anger, frustration. There was no one to talk to up on planet Earth who’d understand.” So Big K.R.I.T. sought conversations among the deities. “The conversation you give between a god and a goddess, it’s more than them and greater than them,” he says. You can see this in moments like “Kreation”, where he speaks with a woman about creating Cadillactica; “Life”, where he misses his transmission, dodging comets, to find life on a new planet; “Soul Food”, where he equates the loss of tradition with the loss of good morals, love, and community; or “Saturdays = Celebration”, where he raps existential (“Ain’t no tellin’ if I’ma get it right/ Look to God up under city lights”). Creating conversation among deities, mythologies, or dazzling utopian personae has been seen throughout funk music; K.R.I.T. furthers the tradition on Cadillactica.

As Afrofuturism seeks to explore imagined worlds and create new spaces to charter, the future remains open. “I’ve always thought the whole point of hip-hop is to go into new territories, get out of your comfort zone,” says K.R.I.T. “Yeah, remember where you came from, but always, always dig deeper and go farther.” Alongside Big K.R.I.T., groups like Shabazz Palaces and THEESatisfaction are doing just that: creating music that follows what George Clinton and Sun Ra did in attempt to create new environments of unbridled creativity. And as these imagined spaces are being reached, let’s hope they move the focus away from what we are in the present and toward what we will become in the future.

Alejandra Ramirez is a writer in San Antonio. Her work has been featured in Complex, Prefix, and The Current. She tweets.