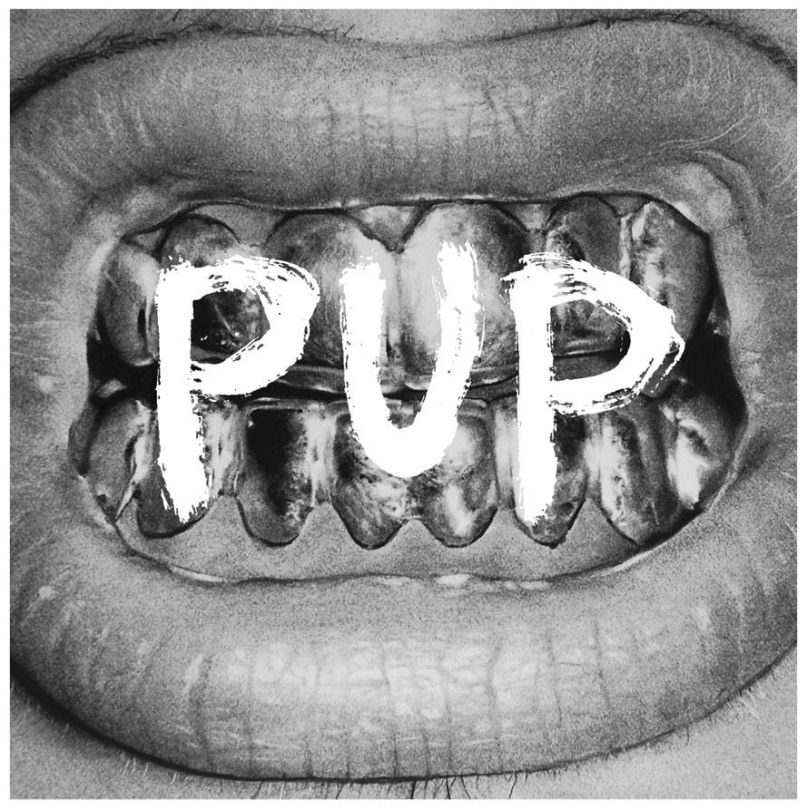 Component is a section of Aux.Out. for one-off pieces, special editorials, and lost orphans of the music discussion. Today, Alyssa Pereira speaks with PUP about their whirlwind year and learns that the work isn’t over for the Toronto punks.

PUP’s self-titled debut was phenomenal. Consequence of Sound called it an “incredibly self-assured and refreshing debut.” Noisey gave it “a perfect ten.” The New York Times deemed the album one of 2014’s best breakouts, and Rolling Stone loved it, too. But perhaps one of the most notable things about the Toronto punk band was that before early 2014, basically no one outside of Canada had even heard of them.

The band’s formation was not unusual. All four members quit their jobs on the same day and then binge drank to celebrate their freedom — a fitting origin story for a punk band. Not long after, they made a public announcement to anyone who’d listen that they would play 200 shows in 2014. It was a goal singer and guitarist Stefan Babcock described as “absurd,” but nevertheless, it meant the band would play a complete year. It would be impossible for any band members to get a job.

Somehow, through networking, smart partnerships, and raging their fucking faces off, PUP surpassed that goal, playing over 250 sets in the United States, Europe, Australia, and their native Canada. But it wasn’t just about the live show. They were long-listed for the Polaris Music Prize, they garnered nominations for Canada’s JUNO Awards and the Prism Prize, and they were invited to play the NME Awards Tour. They performed a string of dates with The Get Up Kids in March, and they’ll be playing Warped Tour throughout July.

Though it may be a cliche, the term “buzz band” is one way to describe a band that critics have earmarked for success. In PUP’s case, everything was well documented. Their 2014 can be organized, traced, and studied. It can be examined in an effort to find out exactly what makes a musical act so interesting, what makes it pull attention, and what makes it successful.

So how does a band go from relative obscurity to worldwide recognition in only a year?

“You have to put everything on the line,” Babcock tells me. “You have to have everybody [in the band] on the same page willing to be so broke that you can’t eat sometimes, and willing to quit whatever jobs they have and just play.”

One wild day, that all happened.

“We all planned it out so that we saved a bit of money, but that was a pretty wild day with lots of booze,” recalls Babcock. The group changed their lives fairly swiftly, only saving a little bit of money before pulling the cord. Alcohol helped, though. Now, a couple years later, the band doesn’t believe it was a reckless decision.

As Babcock says, “If you’re going to a job every day, that doesn’t help you learn about music, and if you want more than anything else in the world to play music, you should probably quit your job.”

The band set two important goals: make an album that isn’t shit and play as many shows as possible.

The first came easy. PUP, more than anything else, wanted to tour. However, that didn’t mean they could make a garbage album. “When we started the band, our goal was to write like seven songs so that we could do a full set,” Babcock says. “It wasn’t to write an album or anything like that. The album was meant to sound as close to the live show as possible.”

The second goal took a bit (a whole lot, actually) of legwork. As soon as the band set their sights on touring outside of Canada, they made a public vow: to play 200 shows in one calendar year.

“The main thing we wanted — we didn’t have expectations of becoming this big or selling this many records — was just to stay busy for the whole year,” Babcock says. ‘My personal goal was just not to go back to an office job.”

To get to that point, they had to make some big sacrifices. First, there was the whole “not having a steady job” thing, which came with some major consequences.

“I know a lot of people will come up to us after shows and have this expectation that we’re living [well] when actually like all four of us are living below the poverty line,” Babcock admits. “I think a lot of people would be disappointed if they were only able to pay the rent and feed themselves, but I am incredibly stoked on the fact that music has allowed me to do that, and most people don’t get to that point.”

Anger, self-consciousness, nostalgia, doubt — PUP touched on many subjects listeners were familiar with. That was sort of the point. Not only did making the album fulfill the need for a creative outlet that Babcock and the other members had long searched for, it also satiated the need for great material to take on the road.

“It was a lot of apathy and frustration at that point in my life, having worked so hard to do what I thought I was going to love and then realizing that I didn’t really love it all that much,” Babcock says. “I think a lot of people can relate to that. I think a lot of people in their early to mid-20s find themselves not on the path to where they want to be.”

PUP recruited Dave Schiffman, who had mixed and recorded bands like Weezer, Rage Against the Machine, and even Tom Petty and had one goal in mind for the album: capture their turbulent live show sound and get it onto a record. Schiffman cut them a pretty good deal, and the band finished the album quickly.

The album, as they say, was thrown down with the sole intention of allowing them to tour, but at the same time, the music had to be strong. After all, they had to like it if they were going to play it at least 200 times.

“I think for most bands,” Babcock says, “what it comes down to is writing good songs, or OK songs, ’cause if you’re a great live band and the songs are no good, then no one wants to come see you in the first place.”

Canada is something of a bubble in the music world. It’s not easy to translate success in the country to a global scale. The first US tour PUP did, for example, was basically fruitless. Not many people knew who they were, and nothing really came from it.

The tipping point came on their second US tour, which happened around the time SideOneDummy was re-releasing their album. They had been sending demos out to bands in hopes of touring, and soon enough, one came through. The Menzingers, of Pennsylvania, brought them on for the US leg of their tour.

“We quickly discovered that at every show there were a bunch of people singing to our songs,” Babcock says. “That really got us motivated and kept us going for the rest of the year. Even 40 people in a town we’ve never been to was really exciting.”

“I hope people see our live show as I see it,” Babcock says. “I’m kind of an angry guy, but I get it all out on stage. I hope it gives other people a way to vent their frustration and get all the bad shit out of the way so they can feel OK the next day.”

It sounds like a bit of an emotional rollercoaster when you consider that this band did that almost every night for a year, but they pushed through it. Though the band wouldn’t necessarily advise anyone else to embark on the same endeavor, it certainly poised them for success.

As a matter of fact, PUP reached the 200-show mark somewhere in the late summer/early fall, but they kept playing. By the end of 2014, they had played more than 250 shows in a single year.

“Play as many shows as you can,” Babcock says. “We just played as much as we could to get to the point where if something happened, we’d be ready for it. Play as much as you can and stop doing the stuff that doesn’t help you do it.”

Before SideOneDummy signed PUP in late 2013, the band was promoting their live shows themselves. As SideOne’s Jamie Coletta says, “They definitely utilized their social media properly in the early days,” but most of their press was limited to Canadian publications, so they were basically only playing sets in Canada. They didn’t have much to offer international presses without a full album.

“We always focused on getting press outside of Canada because we didn’t want to fall into that same trap,” Babcock says. “Canadian press is pretty limited. There are only a few publications that are really substantial.”

That’s when the label stepped in. Its publicity team got the word out about the band, but limited pitches to song premieres. “They were super involved in that I kept them in the loop on everything,” says Coletta. “We made key decisions together, along with their manager, instead of me just placing features without their knowledge.”

Dude @RollingStone called us a Breakout Rock Band of 2014. Check it: http://t.co/hCENWfEdKp

After embarking on tours, the press started rolling in. First came the endemic Canadian sites. Those were easy. The harder ones to land were the American and international outlets. Noisey wrote about their live show, and then Consequence of Sound gave the album a killer grade. Soon after, Rolling Stone said they were one of the best rock acts of the year, and The New York Times followed suit.

“I woke up one day to [Rolling Stone’s] ‘best of’ playlist and nearly fainted,” Coletta says.

In June 2014, PUP was long-listed for the Polaris Music Prize. The Globe and Mail called them a frontrunner, alongside Drake and other prestigious Canadian acts. PUP didn’t win (Tanya Tagaq did), but considering they were basically unknown to listeners outside of Canada just a few months before, it served as a sign to keep going.

This year, the band was nominated for two JUNO Awards: Recording Package of the Year and Video of the Year for “Guilt Trip”.

All in all, it was a whirlwind year, but the work isn’t over. Ultimately, the band is still hustling to get their name out there.

SideOne believes the band will have another busy year. On top of touring, they’ll begin recording a new album in the fall. “If anything,” Coletta says, “I think this year will allow them to grow out of the ‘new band/band to watch’ category and establish them further as a total force to be reckoned with.”

Babcock just has one stipulation: He hopes there won’t be another year of over 200 shows.

“You start to realize it’s getting a little bit late,” he explains. “Not like you’re old, but there’s only a certain amount of time where you can worry about not having money and not having responsibilities. There’s kind of this bubble you get trapped in where, Canadian bands, they don’t get to play in the States, or when they do, it’s really small venues, and they never get to go overseas, and somehow we broke out of that.

“There are bands in Canada that are far bigger than us, and they just never get to leave,” he continues. “We expected to be one of those bands. Play around Toronto, maybe do a Canadian tour, go back to our normal lives and our normal jobs. But we finished our first Canadian tour, and it just opened up all these doors for us. And then in the year that followed, we toured the States like three or four times and Europe, Australia. It’s been a really nice surprise.”