Masks were, of course, optional 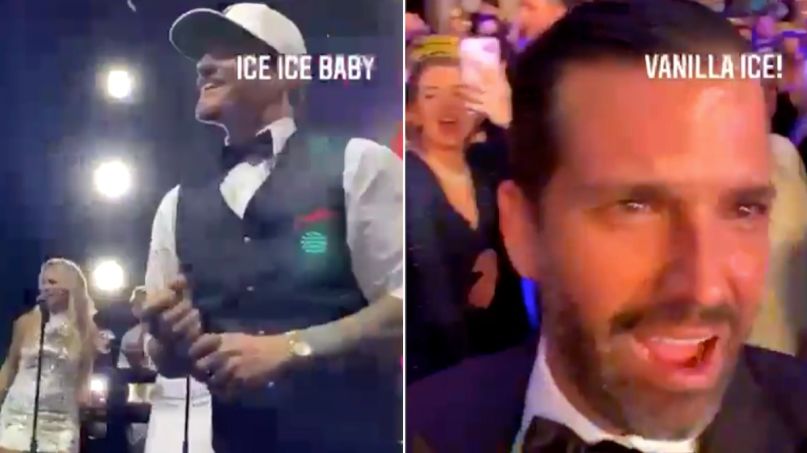 Donald Trump’s South Florida resort Mar-a-Lago threw a New Year’s Eve bash to celebrate the end of a year which saw the deaths of 346,000 Americans due in large part to the Trump Administration’s sheer incompetence and disinterest in managing the pandemic. Masks were, of course, optional.

Some 500 of MAGA’s finest — including Donald Trump Jr., Eric Trump, Rudy Giuliani, Kimberly Guilfoyle, Judge Jeanine Pirro, and MyPillow CEO Mike Lindell — attended the black tie event. (Donald Trump himself was not in attendance, as he returned home to Washington, DC early in order to plot out his election coup.)

Non-Trump family members paid up to $1,000 for the right to eat from a menu that included “Mr. Trump’s Wedge Salad,” cheese tortellini, and Wagyu beef. Music was provided by the Mike Love-led Beach Boys, Vanilla Ice, and the 70’s new wave band Berlin.

“Ok this is amazing,” Don Trump Jr. wrote in a Facebook post that included a video of maskless party-goers dancing along to “Ice, Ice Baby”. “Vanilla Ice is playing [at] the Mar-a-Lago New Year’s Eve party. As a child of the 90s, you can’t fathom how awesome that is. Beyond that, I got the birthday shoutout so that’s pretty amazing.”

It’s worth noting that Vanilla Ice previously canceled a 4th of July concert scheduled in Texas following pleas from local health officials who worried that such an event would exacerbate the state’s coronavirus outbreak. “I listened to my fans, I hear all you people out here. I didn’t know the numbers were so crazy,” Vanilla Ice said at the time. “We just want to stay safe, we do take it seriously, and we want to make sure everyone stays safe.” As those “numbers” are even more crazy now, it seems Vanilla Ice was either lying… or lying.

The Mike Love-led Beach Boys previously played a Trump benefit rally back in October. In response, co-founding members Brian Wilson and Al Jardine issued a public rebuke of Love and said they only learned of the event through the press.