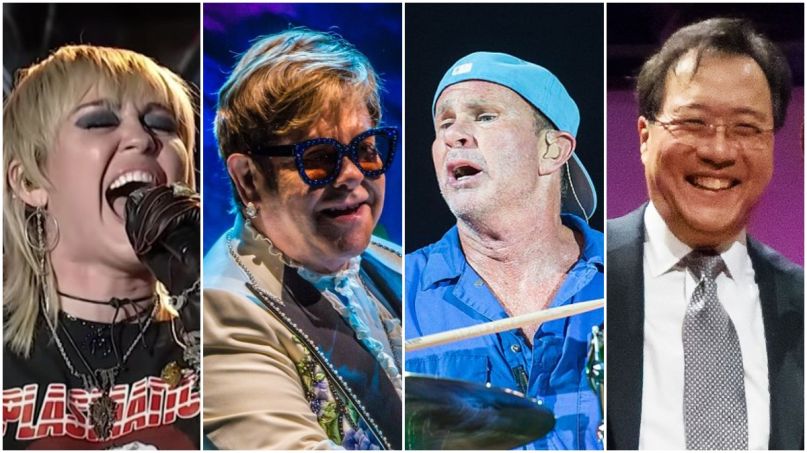 Miley Cyrus isn’t slouching on the Metallica tribute album that she first announced back in October. In a new interview, the Plastic Hearts artist confirmed that the project is well underway and that it will feature an eclectic range of collaborators, from Elton John and Red Hot Chili Peppers’ Chad Smith to famed cellist Yo-Yo Ma.

The 28-year-old first revealed her affinity for the metal titans when she busted out a roaring cover of “Nothing Else Matters” at Glastonbury 2019. Last year, she doubled-down on her admiration by saying that Plastic Hearts was heavily inspired by the thrashers. However, much like Cyrus’ latest full-length was a modern pop take on ’80s rock and roll, her Metallica tribute sounds like it’ll be imbued with a diverse palate.

“I did a Metallica cover of ‘Nothing Else Matters’ featuring Elton John on piano,” Cyrus said while speaking with the UK radio show Capital Breakfast. “I’ve got Yo-Yo Ma, Chad Smith; so many all-stars. I’m so excited about this collaboration. I’m really stoked. I love when ingredients don’t quite fit.”

That little slice of the personnel list is certainly an eclectic roster. Then again, if anyone were going to enlist a ’70s pop icon, a funk rock drummer, and an 18-time Grammy-winning cellist for an album of metal covers, it’d be Cyrus. Fittingly, the boards are being worked by the jack-of-all-trades producer Andrew Watt, who’s worked with everyone from Justin Bieber and Post Malone, to Ozzy Osbourne and Blink-182.

Cyrus didn’t offer a time frame for when the album will actually see the light of day, but it appears like things are moving at a speed where 2021 seems likely.

Meanwhile, the pop star capped off a banger 2020 by claiming the No. 1 spot on the US Rock Albums chart and performing her hit “Edge of Midnight” on Dick Clark’s New Years Rockin’ Eve. Find out which one of her tracks landed on our Top 50 Songs of 2020 list.

As it turns out, Cyrus isn’t the only artist who’s hired Smith to do some metal drumming. The 59-year-old is set to appear on Ozzy Osbourne’s upcoming album alongside Foo Fighters’ Taylor Hawkins and Metallica’s Robert Trujillo, and the producer for that project is none other than… Watt. Small world.

Editor’s Note: Join us in the fight to protect live music by picking up our new original shirt. A portion of all proceeds go towards independent music venues in their recovery efforts.