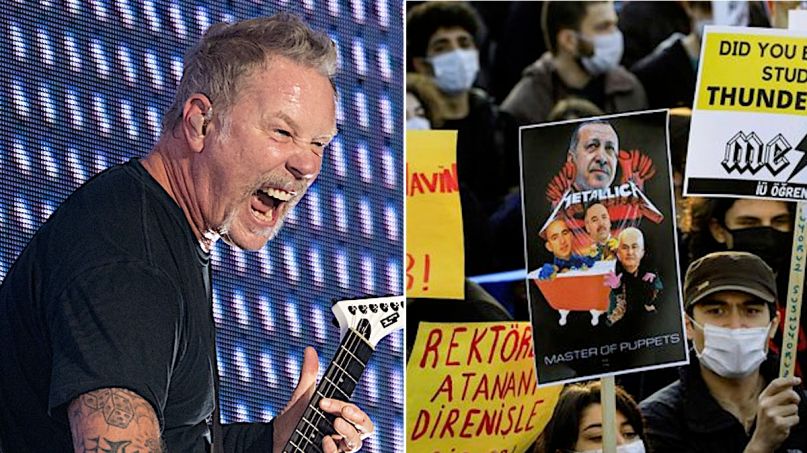 University students in Istanbul blasted the Metallica classics “Master of Puppets” and “Sad But True” to protest the appointment of a new rector with ties to Turkey’s conservative ruling party. Interestingly, the new rector himself has claimed to be a Metallica fan.

According to The Guardian, Melih Bulu was appointed rector of Boğaziçi University by Turkish president Recep Tayyip Erdoğan on January 1st. The decision outraged students and professors, who argue that the decision was an affront to their academic freedoms. Bulu was the first official to be appointed outside the university community since a 1980 military coup.

Bulu is a self-described fan of heavy metal, exclaiming, “I am a rector who listens to hard rock, to Metallica,” according to Bloomberg. But students used his fandom of Metallica against him during protests on Wednesday, with the songs “Master of Puppets” and “Sad But True” echoing their feelings about his appointment. “Master of Puppets” contains the pertinent line, “Master of puppets, I’m pulling your strings/ Twisting your mind and smashing your dreams,” while the title of “Sad But True” speaks for itself.

Bulu refused to step down as rector, saying, “Boğaziçi students can protest wherever and however they want,” but adding that his appointment “met global standards.”

Students also held up signs showing President Erdoğan as a “master of puppets”, with Bulu among the figures depicted below him.

“He is not our rector, he is not an academic,” remarked linguistics student Ceren Karapınar during the Wednesday protest. “The university is known for its liberal atmosphere and open-mindedness … this appointment destroys it.” At least 24 students have been arrested over three days of protesting.

Just last week, a TikTok star named Zaria used Metallica’s music to clap back at commenters who criticized her for wearing the band’s T-shirt. After the R&B / hip-hop singer-dancer was challenged to name three Metallica songs, she proceeded to shred a number of their classic tunes on guitar.

The Boğaziçi Senate and Executive Board have cancelled a meeting set to take place with new rector Melih Bulu on Jan. 7. The announcement follows the resignation of rector advisor Zafer Yenal earlier on Wednesday. ➖ https://t.co/BlkNjeJjHy