Simmons: "Tell me who the new Beatles is. You can't." 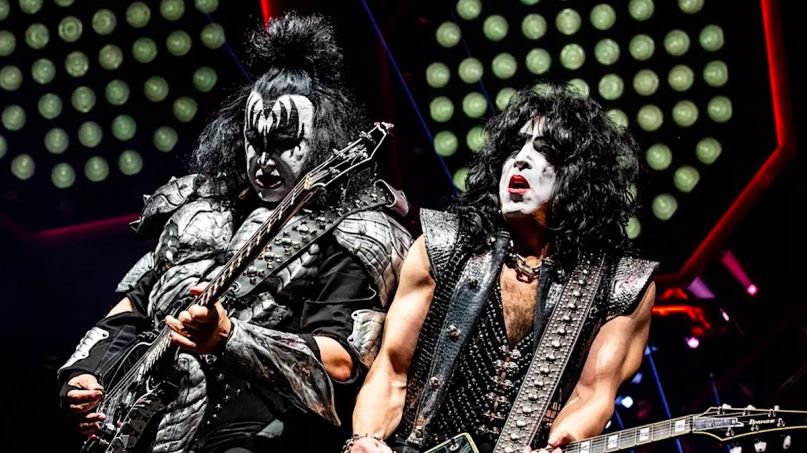 A few years ago, Gene Simmons caused a stir when he boldly declared that “rock is dead.” In a new interview, the KISS singer-bassist doubled down on that statement, even as his longtime bandmate Paul Stanley strongly disagreed.

Back in 2014, in an interview with his son, Nick Simmons, for Esquire magazine, Gene exclaimed, “Rock is finally dead.” He explained at the time, “When I was coming up, it was not an insurmountable mountain. Once you had a record company on your side, they would fund you, and that also meant when you toured they would give you tour support. … There are still record companies, and it does apply to pop, rap, and country to an extent. But for performers who are also songwriters — the creators — for rock music, for soul, for the blues — it’s finally dead.”

KISS just played a record-breaking livestream New Year’s Eve concert in Dubai, and prior to the show, Simmons and Stanley spoke with Gulf News. They were once again asked about the notion that rock is dead.

“Rock is dead,” answered Simmons. “And that’s because new bands haven’t taken the time to create glamour, excitement and epic stuff. I mean, Foo Fighters is a terrific band, but that’s a 20-year-old band. So you can go back to 1958 until 1988. That’s 30 years. During that time, we had Elvis, The Beatles, Jimi Hendrix, Rolling Stones, on and on. In disco, you had Madonna, and then you had your hard rock, you had AC/DC, maybe us, a few others. Motown, all that great music.

He added, “From 1988, until today, that’s more than 30 years. Tell me who the new Beatles is. You can’t. There are popular bands. BTS is very popular. All kinds of bands are very popular. That doesn’t mean iconic and legacy and for all time. It’s different.”

Stanley, on the other hand, replied, “Well, it’s very interesting that the only music that consistently sells out concerts on a large scale is rock ‘n’ roll. And, quite honestly, if you go to see any of the more current acts, I would say, they’re doing KiSS shows. KISS DNA is in every entertainment venue that you see. We wrote the book on presentation, and there’s not a band or entertainer out there that I don’t go see and have a little chuckle, and not for any other reason except [realizing] we’ve left our mark.”

The singer-guitarist continued, “I think it was a wake up call to audiences of what’s possible, and that they shouldn’t accept less. So as far as rock ‘n’ roll being dead, I would bet the farm, so to speak, that Led Zeppelin will outlast anything that has the number one record today.”

As for which contemporary artists they admire, Simmons said, “I think Billie Eilish is fantastic. She’s interesting because she and her brother actually write the material and are unique to themselves. Lady Gaga is fantastic in the female category. She writes her own material, she can sing like nobody’s business.” Stanley added, “I think Ariana Grande’s got killer chops and sings great. Post Malone is really great.”

KISS hope to continue their “End of the Road’ farewell tour in 2021 after having to postpone most of their scheduled 2020 dates due to the pandemic. As of now, the U.S. leg is slated to resume in August, with David Lee Roth as support.

Editor’s Note: Join us in the fight to protect live music by picking up our new original shirt. A portion of all proceeds go towards independent music venues in their recovery efforts.