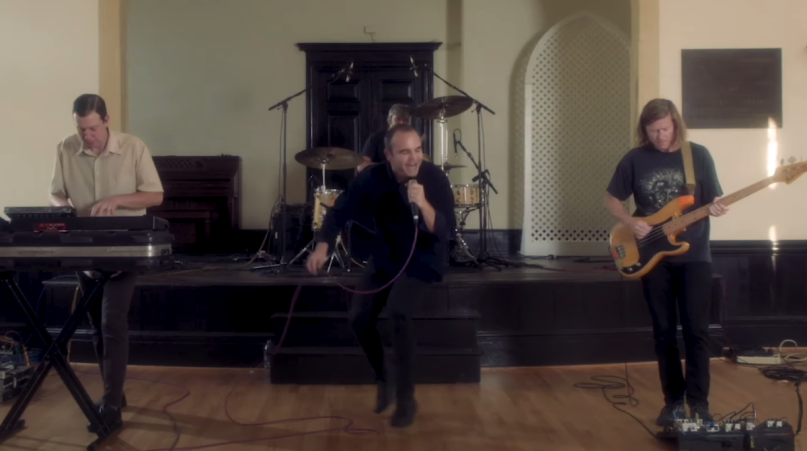 It’s been 10 years since Future Islands last performed for NPR’s Tiny Desk Concert series. Today, they’ve returned a much bigger band — both in notoriety and makeup (thanks to the addition of drummer Michael Lowry) — and, somewhat ironically, in a much bigger space.

Performing remotely as part of Tiny Desk’s pandemic-era (Home) incarnation, the band gathered at Carroll Baldwin Memorial Hall in Savage, Maryland, just outside of their Baltimore hometown. “We lost the desk,” singer Samuel T. Herring joked. It was probably for the best, as no standard piece of furniture can contain the energy Herring brings as a frontman to Future Island’s synth sounds. They delivered a trio of tracks from one of last year’s best records, As Long As You Are, as well as a fitting throwback of “Balance” off On the Water.

“This is a song for anybody who’s struggling through their lives,” Herring said before ending the set on the 2011 cut. “And I know there are a lot of you all out there, just trying to get by, but it’s going to take a little bit more time.”

The setlist also included “Hit the Coast”, “The Painter”, and “Thrill” (but not one of our favorite songs of 2020, “For Sure”). Watch the full thing below.

It’s clear Future Islands haven’t lost a step since being forced to postpone touring behind their latest LP. Previously, they turned in a soul-seizing performance of “Plastic Beach” on Seth Meyers. They also debuted a Dan Deacon remix of “For Sure”, and previously put their own spin on The National’s Matt Berninger’s “One More Second”.

Also be sure to check out Herring’s recent appearance on Going There With Dr. Mike. He spoke about his personal battles with depression and addiction, and his road to recovery.