Four men attempted to break into Dr. Dre's home while he was in the hospital recovering from a brain aneurysm 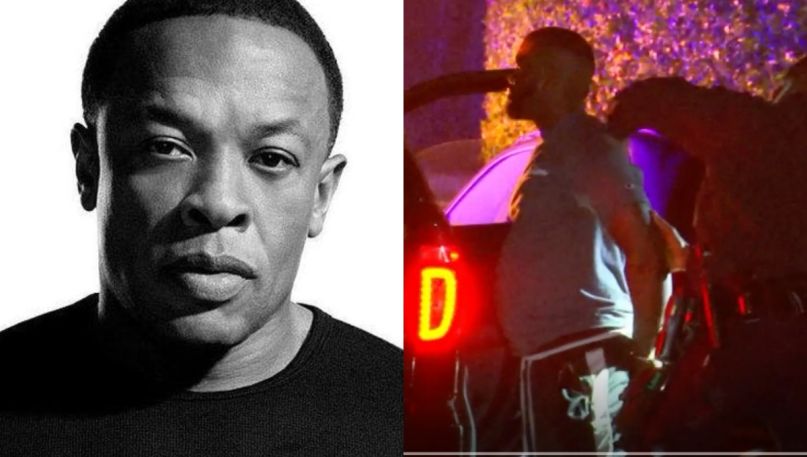 Dr. Dre and one of the four burglars arrested (photo via TMZ)

Upon hearing news that Dr. Dre was in the hospital after suffering a brain aneurysm, four men allegedly hatched a plan to break into his Pacific Palisades home.

According to TMZ, the four individuals were spotted “casing” the million-dollar property around 10 p.m. local time. However, before they could reach the main building structure, Dr. Dre’s home security confronted the men and called the police. “The men fled, but cops arrived almost immediately and chased the 4 would-be burglars, catching and arresting them.”

ABC 7 reports that during a search of the suspects’ vehicle, officials “found a backpack full of burglary tools, saws, and crowbars.” All four men have been arrested for attempted burglary and are currently in police custody.

Dr. Dre, who is reportedly worth $800 million, posted on Instagram last night that “he’s doing great and getting excellent care” from the team at Cedars-Sinai Medical Center. The 55-year-old rap legend remains in ICU for further testing, but “will be out of the hospital and back home soon.”

Previous Story
Neil Young Sells 50% of Rights to His Entire Song Catalog
Next Story
Trent Reznor on David Bowie: “He Helped Me in Those Dark Times Before I Chose to Get My S**t Together”
Popular
More Stories
[fu-upload-form form_layout="media" title="Submit Your Photo"][input type="hidden" name="ugc" value="1"][/fu-upload-form]