Ylvis' novelty club hit "The Fox (What Does the Fox Say?)" also soundtracks one of the dances 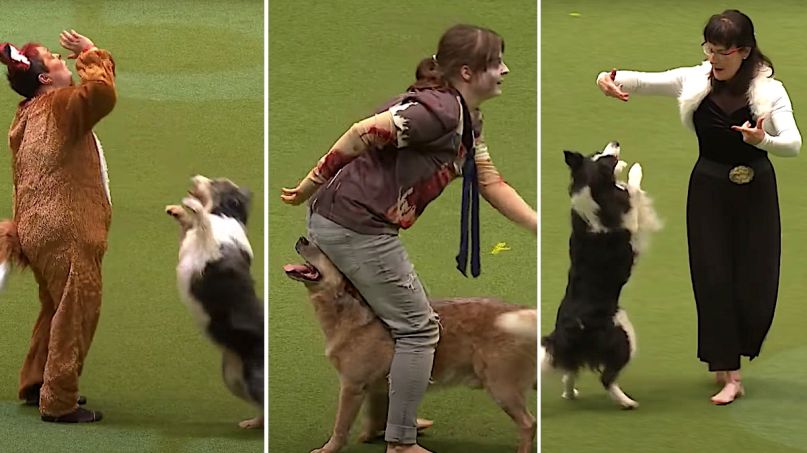 People can go their whole lives without discovering some of the world’s true marvels. Thankfully, a viral Tweet has drawn attention to one of the most amazing competitions no one knew about: dogs dancing competitively to such songs as Evanescence’s “Bring Me to Life”, Michael Jackson’s “Thriller”, and Ylvis’ “The Fox (What Does the Fox Say?)”.

Technically, the contest is called “International Freestyle Heelwork to Music”, and it takes place during the UK’s annual Crufts dog show and competition. While video of the 2020 event was posted back in April, a recent Twitter share of a dog and trainer dancing to Evanescence’s “Bring Me to Life” has shown a new spotlight on the amazing competition everyone’s been missing.

It’s hard to pick who’s more entertaining, the dogs or the trainers (some in outlandish costumes), as they prance around the dance floor with judges studying their every move. The 2020 competition kicked off with Monika Ballerini from Switzerland and her dog Breeze, with Monica wearing a black & white ensemble to match her dog’s natural fur color. Their dance to “Bring Me to Life” ended in an emotional embrace, a moment sure to make Amy Lee proud.

A few dances later, Norway’s Marianne Methi, dressed head to toe as a fox, got down to Ylvis’ novelty club hit “The Fox (What Does the Fox Say?)” with her border collie Vega. And later on in the competition, Germany’s Sarah Apel, in undead makeup, and her dog Ridick, took on the Michael Jackson classic “Thriller”.

Sadly, none of those three teams were declared the winners amidst some more conservative competition, but they’ll forever be winners on social media.

Set aside the next hour or so as you find yourself in a competitive-dog-dancing wormhole. Watch the entire 2020 “International Freestyle Heelwork to Music” competition below. “Bring Me to Life” kicks off Part 1 at the 2:50 mark, with “The Fox (What Does the Fox Say?)” beginning at 19:32. “Thriller” can be seen in Part 3, at the 6:16 mark.

Also, someone call Christopher Guest, and tell him he has to make a sequel to Best in Show.

This is the most important competitive dog dancing (or as we call it in the industry, "heelwork to music") video you will ever see. pic.twitter.com/2EdHLDSjeH