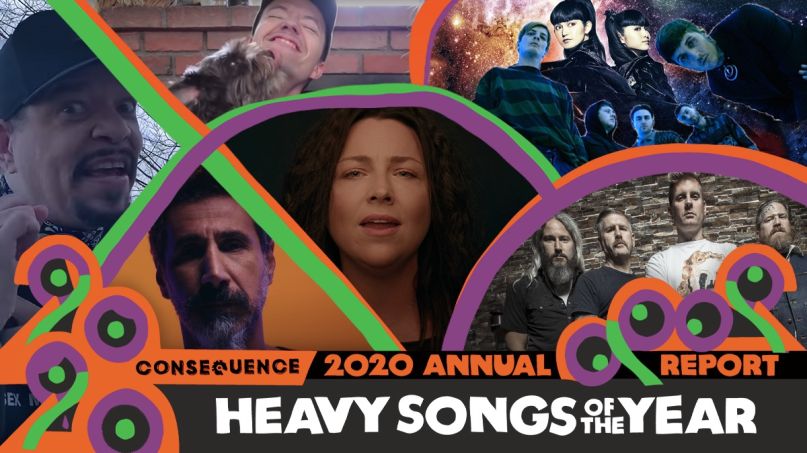 Our Annual Report looks back upon the strange year that was 2020 and the music, film, and television that came with it. Here, we present our Top 30 Metal + Hard Rock Songs of 2020.

As previously explored in our list of the top metal and hard rock albums of 2020, heavy music was truly vital in 2020. Even as artists and the industry at large suffered unparalleled hardships during the pandemic, the fire of creativity burned bright.

Metal has often dealt with extreme topics that tend to tread on the dark side of life: loneliness, despair, anger, passion, romance, death — themes that seem particularly relevant this year. These motifs recur in the songs below, as highlighted by the key lyrical passages that were selected.

Heavy music has often drawn on human history as well as more abstract/occult subject matter, but in 2020, you only need to look out the window. Body Count addressed widespread police brutality on their single “Point the Finger”; Pallbearer pleaded for an answer on “Forgotten Days”; and Gojira literally pined for “Another World”.

In a more practical sense, artists had to stay busy without the ability to tour or play concerts. This led to a variety of supergroups and collaborations that might have not happened otherwise, such as Darling, a new side-project from Windhand’s Dorthia Cottrell and Baroness’ Gina Gleason. Other bands decided to play it low key, only sharing a song or two (i.e. Ministry, Gojira, and Mastodon) as they hunker down to complete new albums, hopefully emerging from the studio to a post-pandemic world.

When we revisit these 30 songs in the future, we might be reminded of tough times, but also the enduring joy they provided, as well. Many have suffered in 2020, and the heavy metal world is no different. Although it’s been one of the most brutal years in the genre’s history, it’s resulted in some of the most vital metal ever made.

Editor’s Note: If you enjoy this list and our other content, consider supporting Consequence of Sound by purchasing an item at our web store. Additionally, a portion of all proceeds are being donated to MusiCares’ COVID-19 Artist Relief Fund supporting independent musicians.

Sounds Like: The slow trudge of a golem as it moves steadily over an icy landscape

Why It Matters: The first new album in nearly 30 years from these metal titans was welcome news in an otherwise shitty year. And this sludged-up track — inspired by fantasy author Fritz Leiber’s short story of the same name — was all the proof the world needed that Cirith Ungol hadn’t lost one iota of their bone-crushing power in all that time. –Robert Ham

Sounds Like: Classic punk with a sharp modern sound

Key Lyric: “Ever seen the face of revolution?/ It looks like me”

Why It Matters: Supergroup Fake Names tout a serious punk pedigree. The band features Refused singer Dennis Lyxzén and Bad Religion/Minor Threat guitarist Brian Baker, and as one might expect, there’s a definite political slant to the lyrical content. The singer has never shied away from expressing his views in song, or in interviews, for that matter. Fake Names’ debut single, “Brick”, picks up lyrically where Refused’s 2019 album, War Music, left off, as Lyxzén rails against the pervasive capitalist agenda. —Jon Hadusek

Sounds Like: A cold sunrise on a gray day

Key Lyric: “You can be happy in the end/ To die surrounded by family and friends”

Why It Matters: Darling are Baroness guitarist Gina Gleason, Windhand singer Dorthia Cottrell, and guitarist Leanne Martz. The supergroup have only released one song, but it’s an immense recording, shimmering with dark synths, expressive guitarwork, and a masterful vocal performance from Cottrell. Darling offer yet another viable sonic palette for her words and voice, and we can’t wait to hear more. —Jon Hadusek

Sounds Like: Aggressively melodic hard rock with the soulful vocals only Lajon Witherspoon can deliver

Key Lyric: “Why do we believe this time around/ We found our soul/ Better make your peace with death”

Why It Matters: Sevendust can be a brutally heavy metal band, but resting under that sonic assault is a melodic character that makes the group’s music appealing to a wide range of listeners. On “Dying to Live”, the Atlanta band serve up heavy riffs and chugging rhythms, with a soaring, melodic vocal from Lajon Witherspoon that makes this a very digestible rock single. It proves hat heavy and radio-friendly don’t have to be mutually exclusive. –Anne Erickson

Sounds Like: The bastard sons of Venom and Motorhead partying at a truck stop

Key Lyric: “Give me some speed!” (cueing the guitar solo)

Why It Matters: Forever partying like it’s 1980, Athenar (sole musician behind Ohio black and rollers Midnight) riffs with garage-y bluster on the blistering opening to his newest and catchiest record. From the perfect two-step bridge to the under-10-second guitar solo, he proves he can have a rollicking and raunchy good time more concisely than almost anyone else. —Joseph Schafer

Sounds Like: A triumphant anthem for anyone who has been afraid to speak up in the past

Key Lyric: “Whether you like it or not, you’re gonna take what I got/ If we can’t talk about it, we’ll just keep drowning in it”

Why It Matters: Evanescence launched back onto the scene in 2020, releasing a bevy of rock singles that will all appear on the band’s 2021 album, The Bitter Truth. Among the releases, “Use My Voice” stands out, with its empowering message to women to stand strong and tall. The song features frontwoman Amy Lee delivering inspirational lyrics as she’s backed by a gang-vocal chorus featuring powerful female singers such as Taylor Momsen, Lzzy Hale, Sharon den Adel, and more. — Anne Erickson

24. Gone Is Gone – “Everything Is Wonderfall”

Sounds Like: Rock music that’s heavy as it is melodic

Key Lyric: “Lose the will to wait any longer/ Urge to kill is growing stronger”

Why It Matters: The first of three appearances by Mastodon’s Troy Sanders on our list comes via Gone Is Gone’s “Everything Is Wonderfall”. While Sanders is involved in two supergroups with similar names (Killer Be Killed being the other), the bands shouldn’t be confused with one another. Gone Is Gone also features Queens of the Stone Age’s Troy Van Leeuwen and At the Drive-In’s Tony Hajjar, and the supergroup’s heavy alternative sound, as heard on the thunderous “Everything Is Wonderfall”, harkens more toward melodic grunge and stoner rock. Sanders’ vocals are really the only reminder of Mastodon here. With an extremely prolific output in 2020, he seems intent on exploring other styles and approaches as his main band incubates their highly anticipated next album. —Jon Hadusek

Sounds Like: Hellbilly Deluxe-era headbanging hard rock with a tinge of industrial

Why It Matters: “King Freak” is the first single from the upcoming Rob Zombie album, The Lunar Injection Kool Aid Eclipse Conspiracy, due out March 12th, 2021. With a powerful rhythm section provided by bassist Piggy D and drummer Ginger Fish and some monster riffing from John 5, let’s hope this is an indication of what the rest of the album is like. It harkens back to the heaviness of Rob Zombie’s earlier material like “Superbeast” from 1998’s Hellbilly Deluxe. Just the bit of monster movie-style fun we need right now. –Colette Claire

Sounds Like: Two rock icons joining forces and sounding as great as they ever did

Key Lyric: “And the truth is I don’t wanna die an ordinary man”

Why It Matters: Ozzy Osbourne and Elton John, two groundbreaking Rock and Roll Hall of Famers, teaming up on anything is hugely appealing. And while they opt for the softer side of things with “Ordinary Man”, it’s not shmaltzy, but rather, it succeeds on genuinely tugging on the heartstrings. The song’s music video adds to the power of lyrics, as it consists of Ozzy watching “scenes” from his life (I dare you to try and keep a dry eye during the spot when he’s watching footage of the legendary Randy Rhoads). —Greg Prato

Sounds Like: If Rob Zombie produced a Ministry track

Key Lyric: “Young people are starting to understand your betrayal/ We will not let you get away with this”

Why It Matters: This is evidently what happens when Al Jourgensen is put under quarantine. “Alert Level” served as a stand-alone single that may end up on the next Ministry album, likely to be released in 2021. The song goes for more of a metal/hard rock direction rather than an industrial direction similar to Ministry’s later releases like 2013’s From Beer to Eternity. The sampled voice of environmental activist Greta Thunberg and a woman who sounds like a news anchor asking, “How concerned are you?” reminds us that Ministry have always been as political as they are heavy. –Colette Claire