Save Our Stages Fest Raised $2 Million for Independent Venues: “This Moment Brought Millions of People Hope” 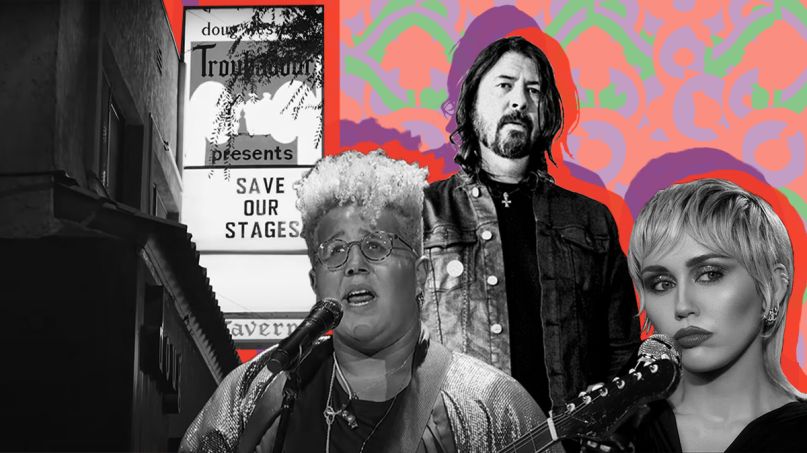 As our Annual Report continues, we’ll be taking several looks at how live music changed in a year where most of the world was in lockdown. Today, we share our conversation with Save Our Stages Fest’s Stephen Sternschein on what’s being done to preserve live music and venues during this pandemic.

The American experience of the COVID-19 pandemic is dominated by unimaginable numbers made real: 300,000 dead, 16 million infected, an estimated $3-$5 trillion hit to the country’s GDP over the next two years. Tucked inside that last figure is another statistic, revealed over the summer, that made the year even darker for music fans: According to a nationwide survey of club owners and promoters conducted by the National Independent Venue Association (NIVA) this past June, 90% of independent music venues remain in danger of closing amid pandemic restrictions without increased federal aid. Coupled with the high-profile cancellations of the nation’s music festivals, those sobering numbers painted a grim picture of live music’s post-pandemic prospects.

Those prospects brightened considerably this month, with the passage of the latest COVID-19 relief package. Tucked within the stimulus measures are provisions that began as the Save Our Stages Act, a piece of bipartisan legislation introduced by Senators Amy Klobuchar (D-MN) and John Cornyn (R-TX) thanks to grassroots lobbying efforts from NIVA and its affiliates. The latest version passed this month contains $15 billion in funding for independent theatre and concert venues, money meant to staunch the economic losses that have mounted since an industry-wide shutdown in March.

While much of NIVA’s efforts took place behind the scenes, the organization built to support performance spaces also understood the value of a little high-profile publicity; in addition to spending the summer polling club owners and drafting policy proposals, board members were also plotting an event that would spotlight the hardships faced by the people at the heart of the live music industry. Held over the weekend of October 16th-18th, Save Our Stages Fest brought viewers inside some of America’s most storied music venues, including the Troubadour in Los Angeles, Nashville’s Ryman Auditorium, and New York City’s Apollo Theatre. These visits weren’t just architectural tours, of course; they were stops on an ambitious schedule of live performances from a diverse cast of heavyweights ranging from Foo Fighters and Reba McEntire to The Roots and Miley Cyrus. After a year without live music, and amid existential threats to the concert industry, it was both a moment of hope and a cry for aid. Perhaps most importantly, it was as close as the country could get to an honest-to-God music festival.

Earlier this month, I sat down with Stephen Sternschein — festival producer, NIVA board treasurer, and co-owner of Austin music venues Empire Control Room & Garage and The Parish — to discuss the state of the Save Our Stages initiative, the logistics of putting on a music festival in the middle of a pandemic, and the curious cultural artifacts left behind by a music festival unlike any other before it.

Editor’s Note: Join Consequence of Sound in the fight to protect live music by picking up our new original shirt. A portion of all proceeds go towards independent music venues in their recovery efforts.

The Birth of NIVA

Almost every music fan around the world has a story about the final show they saw before the COVID-19 shutdown. For Sternschein, it was Paul Oakenfold, who played a Friday set at Sternschein’s own Empire Control Room on what would’ve been the first night of South by Southwest. As that show commenced, Sternschein got the call: Austin Mayor Steve Adler was issuing a ban on gatherings of 250 or more the next day.

“That was the last hurrah,” Sternschein said. “I remember being outside on the phone, canceling Questlove for the next night and just being really, really sad about that.”

Once the lockdowns went nationwide and live events halted for the foreseeable future, Sternschein soon found himself in a fight to save his industry, first through local fundraising effort Banding Together ATX and then as a founding member of NIVA. His involvement with the advocacy group began, as so many things in 2020, with a Zoom call.

“I got this call from [NIVA executive director] Rev. Moose saying, ‘Hey, we’re getting on a Zoom to talk to a promoter from England because apparently things are all over there, and I’m going to find out what we can do better over here to prepare.’ That was a really sobering conversation, and out of it came the need for a federal advocacy effort.”

As other NIVA organizers worked to craft what would eventually become the Save Our Stages Act, Sternschein found himself in the role of treasurer, tasked with figuring out how to both fund the advocacy effort and also provide relief for the dire financial straits faced by members. While the idea for a livestreaming concert event surfaced as early as April, it took two key partnerships to bring the festival to fruition. The first came with YouTube, whose Global Head of Music (and ex-Def Jam and Warner executive), Lyor Cohen, pledged his support during a late-night phone call the day after the Troubadour announced it was facing permanent closure in May.

“It was incredible,” Sternschein said, “because this is somebody [Cohen] who’s like, two or three generations of music business hustlers removed from me. I learned about him in school. I listened to the records. His work influenced my career in a huge way, so to have him say to us, ‘Good job for getting this organization together so quickly; we want to help however we can’ was kind of jaw-dropping. Until that point, we’d been asking for like, a couple of grand from ticketing companies. This was the first time anybody in the corporate world really got what was going on and had the resources to not just pat us on the back, but really do something meaningful.”

With YouTube came both the financial and technical support needed to equip clubs with livestreaming capabilities, as well as the clout needed to convince artists and clubs that such a festival was even possible. Next came an even bigger question: Even operating with no crowd and a skeleton crew, how could the festival make sure everyone stayed safe and healthy? .

“We spent a ton of time putting together safety protocols based on film and television procedures that were already in place to keep our staff and our artists safe,” Sternschein said. “We found a national testing partner [in Houston’s EASY Testing], which was really hard to do. You can imagine how many different ways testing folks are being pulled right now. [The company] was started by promoters, and they were like, ‘Oh, we’re going to put you first. This is really important.’ [We also used] an automated camera system for a lot of the shoots, which cut down the number of production personnel that had to be onsite.”

The Club Is Open (For Now)

Archived for posterity (and continuing fundraising efforts), the performances of Save Our Stages Fest produced moments that would have been memorable even in a normal year. Clad in skeleton costumes and armed with jack-o’-lanterns, Phoebe Bridgers filled the Troubadour with Halloween spirit during a set that included a guest spot from Conor Oberst and an electric guitar descending slowly from the rafters. Elsewhere on the schedule, Demi Lovato and Marshmello teamed up for a first-time live collaboration in support of their quarantine single “It’s Ok Not to Be Ok”. Portugal. The Man reached deep into their catalog for some fan-pleasing live rarities, and Miley Cyrus honored the spirit of Dolores O’Riordan with a reverent cover of The Cranberries hit “Zombie”. Although the performances were plenty memorable, the lack of a live crowd to appreciate them couldn’t help but be noticed.

For this unavoidable issue, Sternschein and his team found an ingenious workaround. “The donate button kind of served as an audience meter,” he said. “We went back and looked at when donations were coming in, and it turns out that nasty guitar solos are kind of the best thing for donations. Very clearly, when the guitar solo started, the numbers started creeping up. So, you know, it’s maybe not as immediate, but there is a link.”

During its initial three-day livestream, Save Our Stages Fest raised nearly $2 million for NIVA’s Emergency Relief Fund through a combination of donations and merchandise sales. It also served as the latest step towards a continued artistic advocacy alliance that Sternschein hopes will last far longer than the pandemic.

“We formed a foundation called the National Independent Venue Foundation that has a mission statement that’s broader than just representing independent venues,” Sternschein said. “We’re promoting and preserving a competitive and transparent marketplace that serves a diverse and inclusive community of artists, consumers, and industry workers. It allows us to not just think about what’s right for us as businesses, but to think about what’s right for all of the stakeholders in the independent development cycle.

“The rallying cry for the group of independents that started this whole thing is a commitment to paying artists fairly, taking care of our workers, and impacting our community in a positive way. If you claim to be an independent venue, you can’t just be looking out for yourself. The power of a decentralized network and the accountability that’s ingrained in that is what separates us from the multinationals that are trying to do the same thing.”

According to the statement announcing the NIVF in November, the foundation’s initial goals include “emergency relief funds, education and community programming, employee training and support, economic development initiatives especially in opportunity zones [and] underserved communities.” Next steps for NIVA also include working with the Small Business Administration to see that stimulus grants are processed quickly and distributed fairly and raising more funds to cover the lag between application and approval for the hardest-hit venues.

With that future still in progress, there’s time to look back on the recent past. When asked about his most memorable performance from the festival, Sternschein had a quick answer: after canceling Questlove’s set in Austin back in March, the festival producer got the chance to bring The Roots to Philadelphia’s Apollo Theatre for a Save Our Stages set for the ages. It was a culmination of collective efforts that felt worthy of both reflection and renewed effort.

“It was a really dark time,” Sternschein said. “All of us were staring down the barrel of a gun, and here was this one moment that we created that brought 11 million people a little bit of hope. I was talking to my relative who’s a frontline caregiver. She called me and was like, ‘Oh my God, this is so great. For the first time in months, I’m not thinking about work.'”

To learn more about the National Independent Venue Foundation, the Save Our Stages initiative, and how to help, please visit here.

Editor’s Note: You can also support the NIVA Emergency Relief Fund with our new benefit T-shirt at the Consequence Shop. Featuring an original “Protect Live Music” design by Steve Fiche, the long-sleeve tee is available in red, gold, and black. You can also purchase it below, with a portion of proceeds going to NIVA.