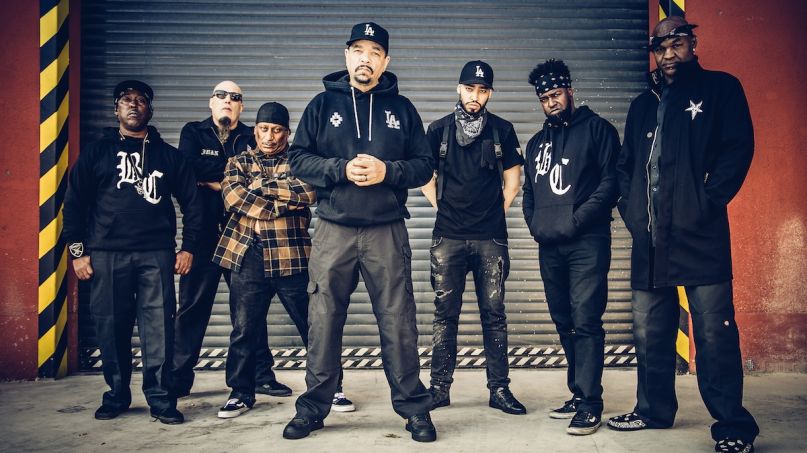 Body Count were recently nominated for Best Metal Performance at the upcoming 2021 Grammy Awards. Frontman Ice-T and company will be competing for the trophy with four other acts, including Power Trip, Code Orange, In This Moment, and Poppy.

For Body Count, the Grammy nomination is bittersweet. The veteran metal band released a well-received new album, Carnivore, right as the pandemic began, but have not been able to tour in support of the effort due to the shutdown of the concert industry. The nod for the song “Bum-Rush” marks Body Count’s second Grammy nomination, having competed in 2018 in the same category with the track “Black Hoodie” from Bloodlust.


Carnivore also includes the track “Point the Finger”, which recently landed at No. 5 on our own list of the Top 30 Metal + Hard Rock Songs of 2020. The song features guest vocals from late Power Trip frontman Riley Gale, who tragically died in August at the age of 34.

Upon news of Body Count’s Grammy nod, we caught up with Ice-T to get his thoughts on the nomination, his general opinion on the Grammy Awards, his reflections on collaborating with Riley Gale, and whether the headline-making events of 2020 have inspired him to write new music.

The Grammy Awards takes place January 31st, with the Best Metal Performance trophy usually handed out during the pre-ceremony. Read our interview with Ice-T below, and pick up Body Count’s latest album, Carnivore, here.

Well, I think my first reaction was more insane when we got nominated for the album before this (Bloodlust), when we got nominated for “Black Hoodie”. I thought it was a joke. I couldn’t believe it. Now, for us to get a nomination on our next album after that, I was like, “Really?!” I guess somebody over there at the Grammys really enjoys what I’m doing. So, it’s a very exciting moment. We lost last time. I think just to be nominated, it sounds corny, with all the thousands and thousands of records that come out every year, is a great accomplishment and we’ll take that. Of course, we want to win but it’s mind-blowing.

On whether he holds the Grammy Awards in high regard, considering his anti-establishment lyrics throughout his career

I don’t really hold any awards shows in extremely high regard. Maybe the Nobel Peace Prize. But it’s just a matter of being appreciated. As an artist you go into the studio, you make an album and just to get any award is a victory. It’s the type of thing that you don’t care about until you’re actually nominated and then, of course, you want to win. The Grammys is a prestigious award. I have to respect it considering all the people before me that have gotten Grammys and to belittle the Grammys would be to belittle all the awards. I would never do that. Personally, it’s just being acknowledged that matters.

Well, the only thing about being nominated this year that sucks is that we are up against Riley. Riley was a friend of ours. We met out on the road. We kinda clicked off. We felt that Power Trip had a vibe that was very familiar to Body Count. We liked them. We collabed on our most recent album, Carnivore, with Riley. To have to lose him unexpectedly was one of the biggest tragedies for me this year because we were talking on the phone a lot. He was young. He was a very cool person. Like I said, if Power Trip were to win this Grammy, I’d absolutely have no problems with it. It would be just like I won the Grammy ’cause that was my guy.

Yeah. Those events have inspired me to write new music. As events happen I write down ideas. I write down ideas for songs and things of that nature. Unfortunately, because of the pandemic, it really stunted our movement with Carnivore. We had just dropped the album. We had an over 20 country tour set up and we lost all of that over the summer. So we haven’t even been able to do a show for Carnivore. To go in and start writing new music is weird when we have a brand-new album that we haven’t been able to perform. So, I have just written down ideas. It seems like we need to re-release this record, maybe add some songs to it after the pandemic. As far as it sounding relevant, I always try to write into the future. I always try to write what I see coming versus what has happened.