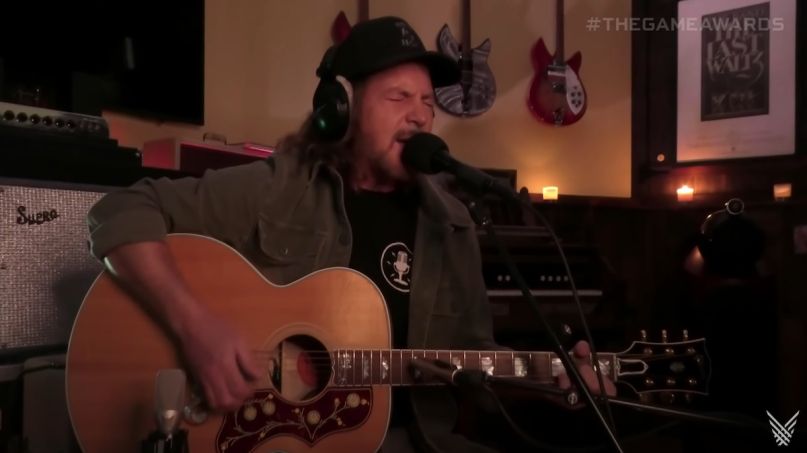 Last night was the 2020 edition of The Game Awards, and The Last of Us Part II, the beloved action-adventure sequel with one of the best narrative plots of the year, cleaned up with a whopping eight awards. To help make the video game’s night that much more special, Eddie Vedder stopped by virtually to perform the Pearl Jam song “Future Days”, which you can watch below.

For his performance, Vedder was introduced by Troy Baker, the voice actor who plays Joel in The Last of Us Part II. In one of the game’s most moving scenes, his character plays “Future Days” on guitar for Ellie, the young protagonist whom he’s been tasked to protect, and the player actually gets an opportunity to try playing the instrument in-game themselves. It’s a remarkably personal and human touch, and Baker explained why the choice to use a Pearl Jam track in particular drove home its emotional weight.

“Neil [Druckmann, the director] incorporated parts of us into Ellie and Joel. Space and music became major elements in their stories, creating touching moments between then. One of those moments, now indelible in our memories, incorporated Neil’s story as well, not as a writer, but as a father,” said Baker. “It involved a song he would play and sing to his daughter every night. That song was Pearl Jam’s ‘Future Days’. One day, Neil asked if I was comfortable playing it in a scene that he was writing for The Last of Us Part II. I don’t generally get nervous, but I understood what that song meant to Neil and to the game. The truth is, Neil could play that song better than me, but nobody can play it better than the person that wrote it.”

Appearing over a livestream, Vedder then played the 2013 cut from Lightning Bolt on acoustic guitar live from his home in Seattle. It was a faithful and stirring version of the stripped-down number, and he ended it by sharing his thoughts on the track’s use in the game.

“I really appreciate the way that was used, especially bringing Joel and Ellie together, connecting through music. I thought it was cool too that it made you perhaps want to pick up a guitar yourself and write a song for your loved one,” said Vedder. “It’s nice to be a part of this year’s Game Awards. What a fascinating way to tell a story, and it’s getting better all the time.”

It’s been a big year for Vedder and the rest of the band. Pearl Jam released their massive full-length Gigaton, one of the best albums of 2020, uploaded their legendary MTV Unplugged performance to YouTube, dropped a standalone single “Get It Back”, debuted two new solo songs, and played numerous virtual benefits. Speaking of, Pearl Jam are gearing up to host a livestream fundraiser for the Georgia senate runoff election this month, too.