The object was removed by "an unknown party", according to Utah's Bureau of Land Management 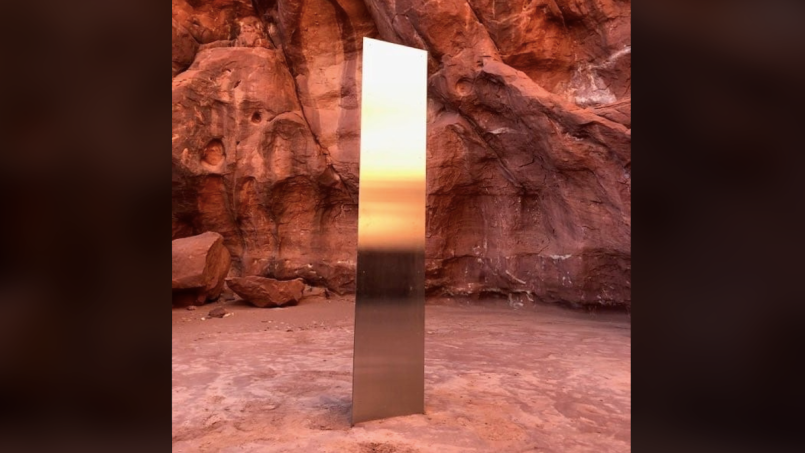 A week after the bizarre discovery of a metal monolith in the Utah desert, the mysterious object has disappeared.

The three-sided structure was found on November 23rd, while a helicopter from the Utah Department of Public Safety was conducting a survey of bighorn sheep. Located in a remote area of Red Rock County, it reminded film fans of Stanley Kubrick’s sci-fi classic 2001: A Space Odyssey. Standing ten to 12 feet tall, it had been installed with “some type of concrete-cutting tool or something to really dig down… and embed it really well,” a spokesman told The New York Times. It’s unclear who put it there, when they’d done so, and why.

On November 28th, Utah’s Bureau of Land Management said in a statement that “an unknown party” had “removed it on the evening of Nov. 27.”  The BLM emphasized that they themselves “did not remove the structure” and added that while its presence was illegal, they would not be looking into the matter further because the monolith was somebody’s private property and “we do not investigate crimes involving private property.”

While we may never know exactly what happened, speculation has centered on the usual suspects: artists and extra-terrestrials. Nobody has claimed it, but associates of the late sculptor John McCracken think it might have been him. In 2011, McCracken installed a similar sculpture at the Zwirner gallery in Manhattan, and his son recalled him saying that “he would like to leave his artwork in remote places to be discovered later.”

But while aliens may sound far-fetched, we might not want to discount it yet. After all, earlier this year the government shared footage of UFOs. Until we learn the truth, you can open the pod bay doors on our ranking of Stanley Kubrick’s filmography.

The truth is out there. 👽 #fyp