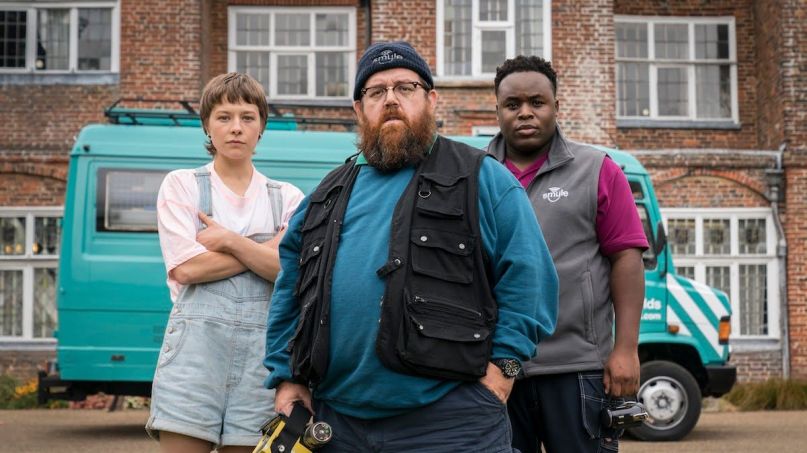 The Pitch: Gus (Nick Frost) isn’t your everyday broadband wi-fi repairman; when he’s not fixing people’s routers, he’s hunting ghosts, uploading his shaggy findings to his tiny YouTube channel, Truth Seekers. But the very day boss Dave (Simon Pegg) assigns him to train green-around-the-gills newbie Elton (Samson Kayo), the pair start to run into all kinds of supernatural happenings – haunted hospitals, souls transferred to machines, what have you. It’s scary stuff, but with the help of Elton’s cosplay-loving sister Helen (Susie Wokoma), Dave’s cantankerous father-in-law (Malcolm McDowell), and a woman named Astrid (Emma D’Arcy) with some ghostly secrets of her own, they might be able to solve these spectral mysteries — and get more subscribers in the process.

Two Wrongs Don’t Make a(n Edgar) Wright: At first glance, the prospect of Frost and Pegg re-teaming for some high-concept deadpan mayhem is an enticing one. Who wouldn’t want a second go-round at Spaced, or a taste of the energetic majesty of the Cornetto Trilogy? Unfortunately for them, director Edgar Wright isn’t along for the ride this time, a prospect that has doomed previous Wright-less collaborations in the past (see: Paul). Truth Seekers suffers from the same problem, a show that can’t quite land the delicate tightrope of tones it’s going for.

Somewhere between Ghostbusters and Hot Fuzz, Truth Seekers seems to aim for a kind of straight-faced Garth Merenghi’s Darkplace, switching out laugh-out-loud parody for a kind of deadpan dramedy that doesn’t land nearly as much as it needs to. Instead of Wright, we’ve got Jim Field Smith (Criminal, The Wrong Mans), who drenches the proceedings in a rainy, desaturated color palette that aims for droll and somber, but ends up feeling perfunctory. There’s little of the visual panache that accompanies a Frost-Pegg joint, which inevitably makes Truth Seekers feel stale.

Strange Things Are Happening: Perhaps Truth Seekers‘ biggest obstacle is the pressure it puts on itself to actually be a comedy — in its best moments, the show spends time building up a found family of characters who help each other overcome past mistakes and regrets. Gus laments the tragic death of his wife years ago, which forced him and his father-in-law into a brittle but affectionately co-dependent relationship; Elton and Helen have their own issues to work out with past ghostly trauma and the infamy that came with it; and Astrid has her own spectral sorting-out to do. Even if the circumstances all tie up a little too neatly to one another (everyone’s pasts are connected in ways even Lost writers would scoff at), but the able cast nail the series’ more dramatic turns.

The same can’t be said, unfortunately, for the scares and the laughs. Most of the gut-busting moments in the show’s first half can be found in the trailer; the rest elicit little more than a bemused chuckle. Here, the deadpan goes too far, too drolly embedded in the narrative to be detectable to the naked eye. Even when Julian Barratt (Mighty Boosh) shows up as a suitably-apocalyptic paranormal writer/cult leader halfway through the series, he feels like he’s going through the motions.

It’s all a little too delicate for the Scooby-Doo shenanigans on display, which also makes the moments of horror less horrifying and more just sad. Bly Manor knows how to mine the signposts of supernatural horror for pathos and melodrama. Here, it just feels like they want to tug at heartstrings because they know they can’t get the scares to land.

Square Pegg, Round Hole: Also, don’t expect for Pegg to be around much — his and Frost’s names are next to each other on the poster, but it’s clear that show is Frost’s vehicle through and through. Pegg, instead, gets an ‘and’ credit and spends virtually all of his time in the offices of the wifi company (Smyle) that hires Gus and Elton. He’s a disappointingly straightforward boss type whose major affectation is the obviousness of his large, sandy-blonde wig, and he and Frost don’t even spend much screen time together. Any larger connection he might have to the mysteries at play feel secondary to the need to put Big Time Movie Star Simon Pegg in the show for the sake of branding.

The Verdict: If you squint, Truth Seekers might get you the brief taste of Simon Pegg-Nick Frost goodness you’re craving. But in its desire to blend British folk-horror scares with a heartfelt story about loss and the way we can lean on others to put the pieces of our lives back together, something gets lost in translation. It’s perhaps unfair to bemoan the lack of Edgar Wright in the show’s pedigree — he doesn’t need to do everything with them! — but it’s hard not to when the show itself invites those comparisons. It wants to read like Hot Fuzz and Shaun of the Dead, but forgets to include what made those such show-stopping game-changers in genre comedy. Like the ghosts the Truth Seekers seek, this show feels half-alive, translucent, and intangible.

Where’s It Playing? Truth Seekers drive up in their van, fix your wi-fi, and track down some ghosts on Amazon Prime Video October 30th, just in time for Halloween.