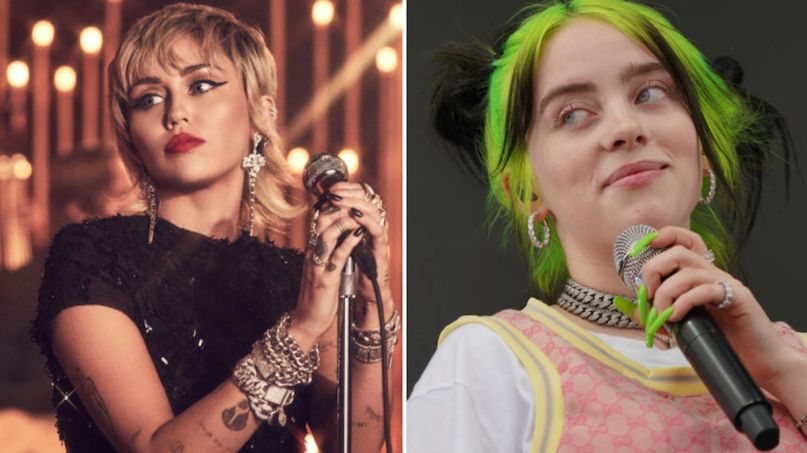 Days after taking the virtual stage for the 2020 MTV VMAs, Miley Cyrus is back with another pandemic performance. Today, she helped launch the latest edition of BBC Radio 1’s Live Lounge Month with a four-song set that included covers of Billie Eilish and Eagles.

Cyrus and Eilish really couldn’t be more different as pop stars, with one known for delivering literal Bangerz and the other for her hushed, alternative pop structures. Perhaps it’s unsurprising, then, that Cyrus’ rendition of “my future” is far more full-throated than the original. Yes, it’s still a delicate piano ballad with a grooving break, but Cyrus ups the defiance in the vocals considerably.

Speaking to Live Lounge host Clara Amfo about why she chose Eilish’s “my future”, Cyrus explained, “I love when a current artist is inspired by the past and that song has a bit of jazz standard inspiration in there which I love. My story that I’ve told throughout my career is always — whether it’s Stevie Nicks on something like ‘Midnight Sky’ or covering ‘Jolene’ — it’s always giving that gratitude and paying homage to the music that made us the artists who we are now.”

Elsewhere, Cyrus took on Eagles’ “Take It to the Limit” in tribute to her late grandmother, who passed away last month. “We’ve had the Eagles on repeat because that was my Mammie’s favorite record, she loved the Eagles,” the singer explained. “So ‘Take It to the Limit’ is a song that my mom and her mom sang in the car every day on the way to school.”

Cyrus has been on something of a cover-spree as of late. This year alone she’s sung The Doors’ “Roadhouse Blues” with Robby Krieger, covered Pink Floyd’s “Wish You Were Here” on SNL, and delivered The Beatles’ “Help!” from inside an empty Rose Bowl Stadium. Eilish, meanwhile, recently sang “my future” at the Democratic National Convention and as part of her NPR Tiny Desk (Home) Concert.