The 100 Greatest Summer Blockbuster Movies of All Time 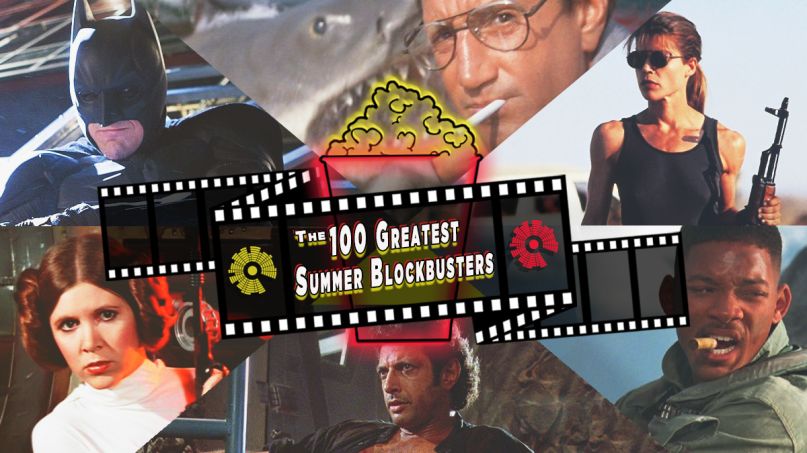 Blockbuster Month is celebrating the true titans of the genre. All month long, you’ll read through a variety of features digging deep into the greatest hits of Hollywood, from popcorn classics to underrated gems. Today, the staff names the 100 greatest.

“Cool.” “Riveting.” “Gripping.” “High-Octane Thrill Ride!” All cliches of film criticism and yet all feelings we’ve experienced while watching a crackerjack summer blockbuster. Oops, there we go again. All things considered, any moviegoer can speak to the divine feeling of sitting in a cool, packed theater in the heat of the summer and being united by narrative. Not just united, but hypnotized, mentally convinced that the fate of the world is before your eyes, and there is nothing more important in that very moment.

It’s escapism. It’s popcorn. It’s Chinatown. But also, it’s the power of spectacle. Over the years, Hollywood has certainly run that concept through the ringer, having turned what used to be a summer blockbuster season into, well, an entire calendar year. Now, all those aforementioned buzzwords can fly around in November, or March, or even as early as January. Not surprisingly, it’s since led to diminishing returns, and the idea or notion of a spectacle is one that occurs just every so often. But it still happens.

And when it does, that same magic comes reeling back, and we’re reminded “why we go to the movies,” as the old adage says. Of course, in the wonderful year of 2020 and the age of Covid-19, that old adage is a fever dream, a fantasy even, leaving us starved for that communal experience we so often took for granted. In a sense, the irony is on Hollywood: At a time when streaming networks are rolling out tens of thousands of hours — both classic and original — the people want to leave the living room. Who knew.

That yearning, though, has led to a renewed appreciation for the magic of the summer blockbuster. All of a sudden drive-ins are a thing again, the classics are making waves at the box office, and people are remembering how great we used to have it on the silver screen. Sure, some of it’s simply an easy distraction in an era of very little offline distractions, but the nostalgic bubble has offered some much-needed respite. Whether it’s Isla Nublar or a galaxy far, far away, being whisked away has never felt so … necessary.

In light of those needs, Consequence of Sound has compiled what they believe to be the 100 greatest summer blockbusters of all time. The list ahead was collated by over a dozen film critics, who not only submitted titles but then also voted on them. As with anything, there are rules, and we really followed one: The blockbusters were strictly limited to releases from late April to Labor Day weekend. That means you won’t see favorites like Logan, or The Lord of the Rings films, or even the new Star Wars sequels.

Instead, you’ll see a range of films that offer a more nuanced definition of what the summer blockbuster was, is, and still can be in the years and years ahead. Because even though intellectual property is the skeleton key of Hollywood, that wasn’t always the case, and really, that proverbial key won’t always work. In the end, it’s the original stories — be it scary or witty, funny or perplexing, smart or slapstick — that remain just as vital (if not more so) than the reboots, reunions, and re-imaginings.

So, grab some popcorn, toss in some M&Ms, and enjoy this action-packed rollercoaster.