Sia and Maddie Ziegler Perform “Together” on Fallon: Watch 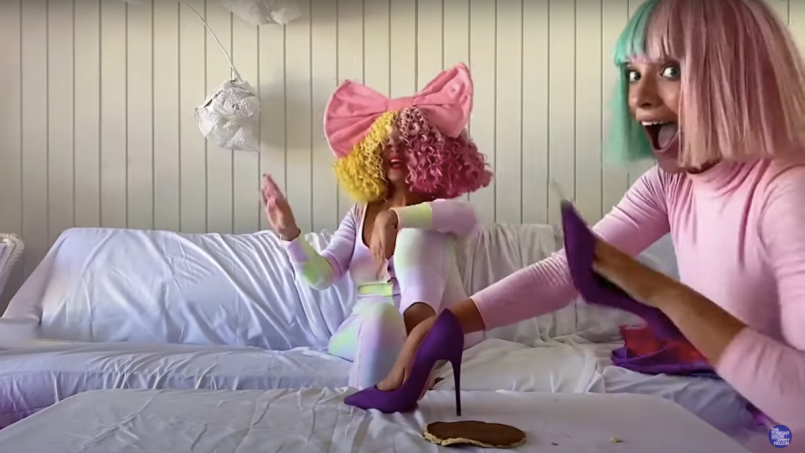 Later this summer, Sia will make her directorial debut with Music, a feature film starring longtime collaborator Maddie Ziegler. Now, the colorfully coiffed pop star and her dancing muse have dialed in to The Tonight Show to perform one of the original songs from Music, “Together”.

Co-written by Jack Antonoff, “Together” opens with a sound like a tinkling music box, before launching into an anthem of mutual love and self-forgiveness. “Come now, set the past on fire,” Sia sings, “Stand up, raise your face to the sky, my love.” The Aussie artist has a voice that can effortlessly glide across the scale. A single “Ooh” can take the ear on a journey, and when she sings a line like, “Can’t love me unless you love you, too,” that “too” is just as expressive as all of the words that came before.

The performance for Jimmy Fallon was directed by Tonya Brewer. Sia makes a rare front-and-center appearance in her own visuals, seated on a couch, and wearing a wig and bow that take up almost as much space as the rest of her body combined. As is so often the case with Sia’s performances, the real star is young Maddie Ziegler. Ziegler first appeared on Dance Moms at age eight, and achieved breakout fame with a stunning performance in Sia’s “Chandelier” (one of our favorite songs of the 2010s.) Now 17, Ziegler remains an electrifying talent, and her quick dancing and deft use of props is the reason that this rendition of “Together” is so endlessly rewatchable. Check it out below.

Music, starring Maddie Ziegler and Kate Hudson, arrives August 22nd. In addition to writing original music for the film, Sia will also be releasing an unnamed album — her first since 2016’s This is Acting. Recently, she collaborated with BTS, co-wrote the COVID-19 benefit single “Saved My Life” with Dua Lipa, and adopted two 18-year-old sons.