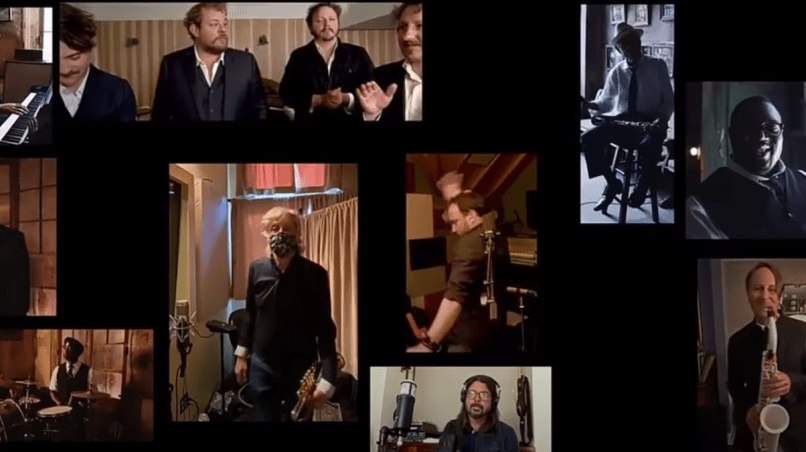 On Saturday night, as Donald Trump tried and failed to boost his own ego in Oklahoma, several of music’s biggest names got together virtually to support a cultural institution. New Orleans’ Preservation Hall Jazz Band held their ‘Round Midnight Preserves livestream benefit to raise funds for the Preservation Hall Foundation.

The event was highlighted by a “headlining” performance of “When the Saints Go Marching In” featuring many of the night’s participants led by Paul McCartney. Macca actually played trumpet during the song, leaving much of the singing to the likes of Dave Grohl, Irma Thomas, Dave Matthews, My Morning Jacket’s Jim James, and Nathaniel Rateliff and members of The Night Sweats. A video of that all-hands-on-deck rendition can be seen below.

The rest of ‘Round Midnight Preserves was a mix of previously recorded footage and fresh live streams. Amongst the older performances — all of which featured the Pres Hall Jazz Band themselves — were MMJ doing “St. James Infirmary” (1:00:30), Alabama Shakes performing “Rise to the Sun” (16:29), Beck playing “Sexx Laws” (2:16:49), and the late Sharon Jones singing “Fish in the Dish”.

Also featured was Arcade Fire’s massive performance of “Wake Up” (3:32:42) during Karnaval 2020 back in February, one of the last major concert events in New Orleans before the pandemic. Arcade Fire’s own Win Butler was on hand to help host/Preservation Hall creative director Ben Jaffe introduce the video. He also stuck around to do a post-show DJ Windows 98 set with Jaffe, which they opened by taking a knee while playing “The Star-Spangled Banner”.

Highlights of the live section included Grohl dueting on Pres Hall’s own New Orleans anthem “Come with Me” alongside the great Charlie Gabriel (1:24:00). Grohl later delivered a solo acoustic rendition of “Best of You” (3:42:00). There was also footage of Foo Fighters tearing up the actual Preservation Hall with “In the Clear”, a song they and PHJB recorded together for Sonic Highways (3:05:20).

Elvis Costello sang “The River in Reverse” from his porch (2:25:00), and Jim James perform MMJ’s “Wonderful (The Way I Feel)” (2:25:00). Throughout the live stream, Jaffee also interviewed the likes of Jude Law, Jon Batiste, Amy Schumer, and a number of other performers.

Watch the McCartney-led “When the Saints Go Marching In”, Foo Fighters’ “In the Clear”, and Arcade Fire’s “Wake Up” below. You can replay the full thing and jump to the timestamps mentioned above via Facebook. You can also donate to the Preservation Hall Foundation now.