The drummer promises the pediatric nurse the first signed copy of the release, which is due in August 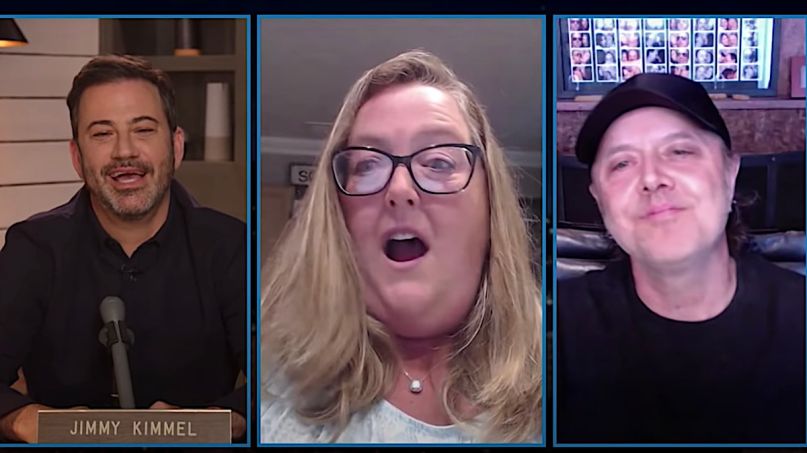 Throughout the pandemic, Jimmy Kimmel has been paying tribute to healthcare workers on his late-night talk show by having celebrities surprise them during their video chat sessions. Last night, Metallica drummer Lars Ulrich surprised pediatric nurse Tracey Bednar, and also spilled the beans on a new box set capturing last year’s “S&M2” performances with the San Francisco Symphony.

When Kimmel introduced Bednar, who is a pediatric ICU nurse in Long Island, New York, the two initially discussed the effects of COVID-19 on children. Kimmel asked her what she does to relax while working such a stressful job, and Bednar responded, “I actually play golf, I love yoga, and the best thing I do is, on my way home from work, when it’s my own private time, I play my radio really, really loud.”

The talk-show host followed up by asking, “What do you play on the radio?”, and Bednar answered, “I actually love Metallica, and my favorite song is ‘Enter Sandman’. I blast it as loud as I can.”

That’s when Kimmel surprised Bednar by bringing Ulrich into the video chat session, causing the nurse’s jaw to drop, and say, “Lars, oh my gosh!”

At that point, the drummer proceeded to praise Bednar for her work, saying, “As a father of three, I can’t thank you enough for what you do. I’ve been sitting here listening in for the last couple of minutes. All of us out here in San Francisco, my family and everywhere are so grateful for what you do. And thank you for having Metallica be a part of your life and your ride home.”

The metal veteran also told the nurse she would be Metallica’s special guest the next time they are able to play a show near her Long Island home, and then offered up some exclusive news. He informed Bednar that he would be sending her the first signed copy of the band’s S&M2 box set, which had not been announced yet, as he held up the vinyl sleeve and mentioned that it would be coming out in August.

The “S&M2” shows took place last September at the brand-new Chase Center in San Francisco. The gigs marked 20 years since Metallica played their original “S&M” shows with the San Francisco Symphony in 1999. We caught the first of the two “S&M2” performances, and you can check out our review and photo gallery here.

The “S&M2” performances were also captured for a concert film that was shown in theaters for one night only in October, which likely means there will be a Blu-ray/DVD component of the box set, as well.

Stay tuned as details of the box set are announced. In the meantime, watch Lars Ulrich surprise nurse Tracey Bednar on Jimmy Kimmel Live! in the clip below.