#MetallicaMondays: Watch a Young Metallica Play Kill ‘Em All in Chicago in 1983

James Hetfield and Kirk Hammett were both 20 years old; Lars Ulrich was 19; and the late, great Cliff Burton was 21 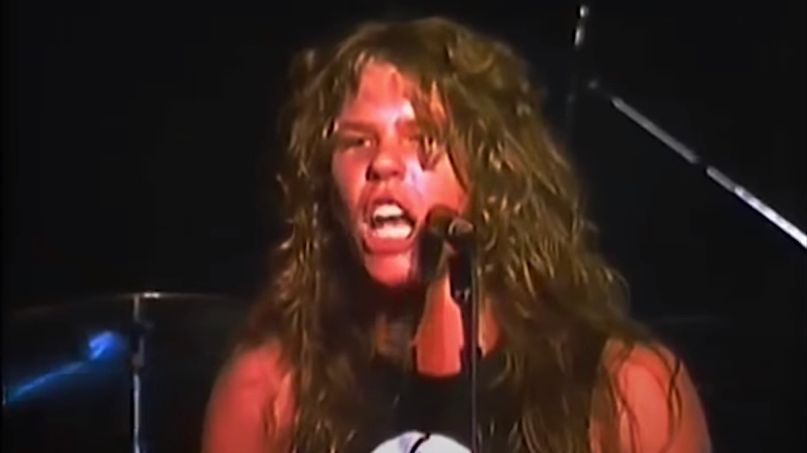 Metallica's James Hetfield performs in Chicago in 1983, via YouTube

Metallica are offering up an extra-special treat for the latest installment of their weekly #MetallicaMondays streaming series. This evening (May 18th), the band is airing an August 1983 show from The Metro in Chicago, filmed a few weeks after the thrash masters released their now-legendary debut album, Kill ‘Em All.

To put the show in perspective, James Hetfield and Kirk Hammett were both 20 years old; Lars Ulrich was 19; and the late, great Cliff Burton was 21. The entire show was comprised of nine songs from Kill ‘Em All (the entire album minus “Motorbreath”), including classics like “Hit the Lights” and “Seek and Destroy”. Plus it featured a guitar solo that ended with fans grabbing and destroying the instrument.

Two of the Metro performances — “No Remorse” and “Metal Militia” — were featured on Metallica’s Cliff ‘Em All home video, while the entire set was included in the deluxe box set of Kill ‘Em All released in 2016.

Metallica launched the #MetallicaMondays series several weeks back as a way to deliver full live shows to their fans during the COVID-19 pandemic. Last week’s stream featured Metallica playing “The Black Album” from back to front during a 2012 show in Austria.

Watch Metallica’s “Live in Chicago” show below beginning at 8:00 p.m. ET / 5:00 p.m. PT on Monday (May 18th). The concerts remain posted on Metallica’s YouTube and Facebook channels for one week, until the next one is uploaded.

Editor’s Note: If you’re a fan of our content, consider supporting Consequence of Sound by visiting our newly launched web store and picking up one of our custom face masks. A portion of the proceeds will benefit MusiCares’ COVID-19 Artist Relief Fund.