Netflix’s The Lovebirds Brings Out the Best in Kumail Nanjiani and Issa Rae: Review 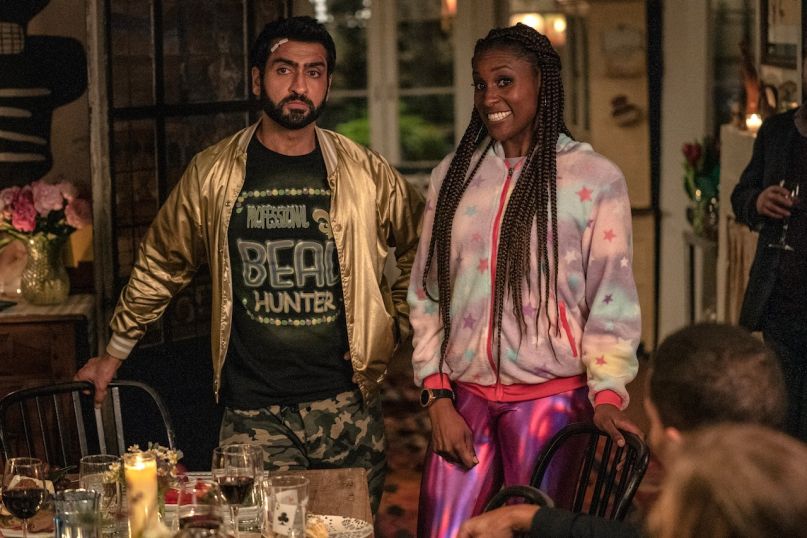 The Pitch: Jibran (Kumail Nanjiani) and Leilani (Issa Rae) are four years into a relationship that’s on the fritz. They snip at one another. They argue over the littlest things. They can’t even imagine themselves winning The Amazing Race. All of that drama is put on hold, however, when the two fading lovebirds fly right into a maddening murder mystery that takes them all across New Orleans. Even worse, they’re the prime suspects. Can they solve the crime before they’re taken in to do the time? That all depends on whether or not they can set aside their differences and find a way to be a team again.

The Big Schtick: The Lovebirds reunites director Michael Showalter and Nanjiani, who both leveled up with 2017’s heartfelt and hilarious The Big Sick. It’s a strong collaboration and this latest foray only solidifies that notion. Showalter has an eye for Nanjiani’s strengths as the star flexes his pre-Eternals muscles in almost ever scene. He’s a charmer, even more so than he was in 2017, and there’s a comfortability to his cadence that speaks to his maturity as a leading star. Whereas last year’s Stuber felt like a step back for Nanjiani, The Lovebirds feels like the true followup we’ve been waiting for since The Big Sick.

For Showalter, this is right in his queue zone, and even has echoes of his earliest work, namely his 2005 directorial debut The Baxter. Granted, Aaron Abrams and Brendan Gall’s screenplay isn’t nearly as much of a subversion as that underrated gem, but they do attempt to twist a few tropes of the rom-com. Most notably, they contend with the fact that this particular situation and story would play out a hell of a lot more differently with two white stars. Jibran and Leilani humorously make note of these differences, and the way it’s handled recalls the self-aware whimsy of Showalter’s salad days (see: Stella).

When Kumail Met Issa: Who knew one of the best on-screen couples in recent years have been network neighbors all this time. HBO is probably kicking themselves because Nanjiani and Rae are irresistible together. Every barb, every look, and every moment lands between the two stars. The chemistry never feels manufactured, it feels earned, and when the “Four Years Later” title card drops, you absolutely believe that time spent. It’s in the way they get under each other’s skin, be it through their personal micro references or their shared inability to eschew any kind of tense situation.

There’s an affable humility to their clumsiness, and much of that has to do with the film’s level of stakes. Like 2018’s Game Night, we’re watching two very relatable people engage with one extremely unlikely situation. The difference here is that The Lovebirds mostly stays grounded, keeping much of the action and the situational humor in our own backyard. It’s a smart move that allows the two stars to steal the scenery — and they do. Whether it’s shopping for gaudy clothes, attempting to break a window, or trying to make sense of milkshakes, Nanjiani and Rae shine amidst the mundanities.

It’s perhaps telling then that the film doesn’t even have much of a supporting cast. Sure, Paul Banks brings an edge as the primary antagonist, but it’s a pedestrian role compared to most comedic villains. The same goes for Anna Camp, who maybe gets a few yucks during a somewhat momentous torture scene. No, the spotlight is always on Nanjiani and Rae, making The Lovebirds far more of a performance piece than the trailer or any marketing lets up. After all, it’s not like the story begs for much introspection; if anything, the whole murder subplot is a MacGuffin to hang out with the two leads — and you’ll want to.

The Verdict: It’s unfortunate that The Lovebirds isn’t getting the national wide release it certainly would have had the world not shut down back in March. But that might be a good thing. Because The Lovebirds is exactly what you want right now in quarantine. It’s a city-scrolling adventure with two catchy leads and romance to boot. It’s the perfect date movie, and it’ll do gangbusters for Netflix, who has yet to issue an original rom-com of this quality. For Nanjiani and Rae, the film will only add to their soaring cultural cache, though given their instant magnetism, they would be wise to reunite again sometime mid-flight.

Where’s It Playing? The Lovebirds premieres Friday, May 22nd.