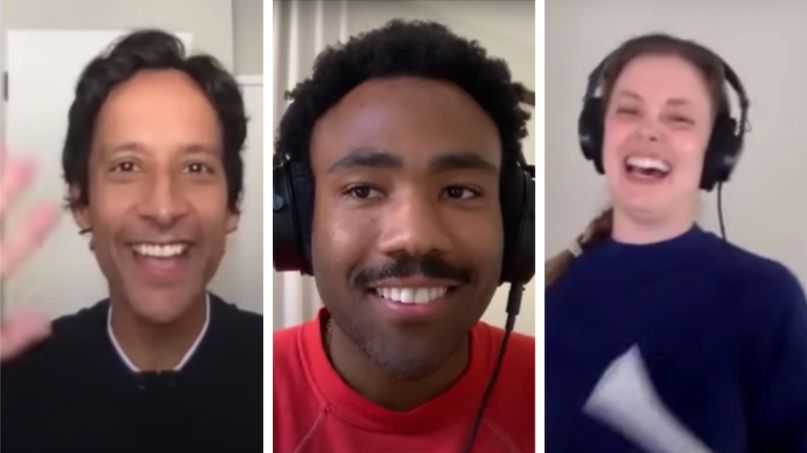 Some flies are too awesome for the wall, even while quarantined. That’s why the entire cast of Community, including Donald Glover, is reuniting for a virtual table read and Q&A today at 5:00 p.m. ET via the Community YouTube channel. The event will raise money for COVID-19 charities — and, unintentionally, add more fuel to the fire of those movie rumors.

In addition to Glover, who left the series in Season 5, the event will include Joel McHale, Gillian Jacobs, Danny Pudi, Yvette Nicole Brown, Alison Brie, Jim Rash, Ken Jeong, and series creator Dan Harmon. After concluding the reading, the cast will stroll down memory lane by answering questions from viewers. Fans can submit their questions on social media by using #AskCommunity and tagging @CommunityTV.

Obviously that list excludes Chevy Chase, who played Pierce Hawthorne on the show. In a way, he will appear on the livestream in spirit because the gang will be reading the Season 5 episode “Cooperative Polygraphy”, which sees everyone memorializing Hawthorne at his funeral. Considering Chase’s infamous racist ribbing of fellow cast members, it’s probably for the best (not to mention unsurprising) that he won’t make a physical appearance.

Ever since Netflix nabbed Community, there’s been heightened interested in the now-defunct TV show. In particular, fans have been crossing their fingers for a spinoff movie that brings the cast back together for an updated hurrah filled with hijinks. Depending on the size of the turnout for this virtual reunion, Sony executives could see dollar signs down the line, be it with a new season or a Netflix-exclusive film. We all know what the response would be like if that actually happened: Cool, cool, cool.

Editor’s Note: If you’re a fan of our content, consider supporting Consequence of Sound by visiting our newly launched web store and picking up one of our custom face masks. A portion of the proceeds will benefit MusiCares’ COVID-19 Artist Relief Fund.