Little Girl Performs Cutest-Ever Version of Rage Against the Machine’s “Killing in the Name”: Watch

The adorable Audrey is accompanied by her dad on acoustic guitar 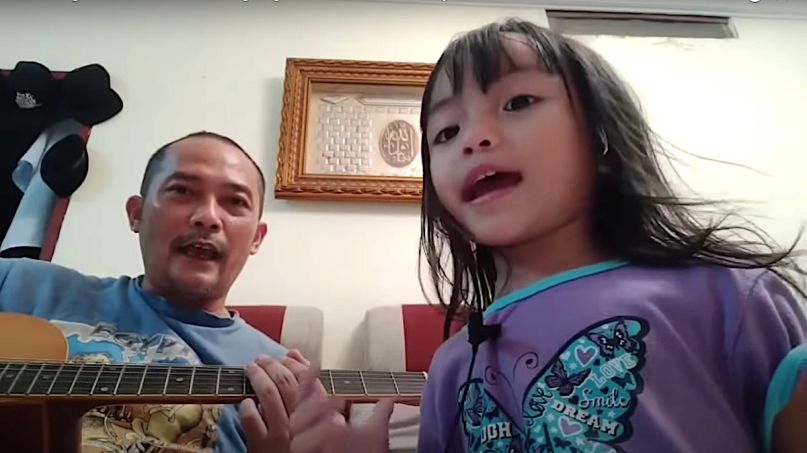 Little Girl Sings Rage Against the Machine, via Facebook

Had it not been for this global pandemic, Rage Against the Machine would’ve been a month into their highly anticipated reunion tour. For now, we’ll have to take the next best thing: an adorable little toddler named Audrey delivering the cutest take ever on “Killing in the Name”.

Audrey is accompanied on acoustic guitar by her dad, a Malaysian musician named Ujang Ijon, as she sings the aggressive track off RATM’s classic self-titled debut album with the sweetest little voice. Along the way, she bites her fingernail, claps along, and turns up the aggression at the 1:42 mark, before ending with an endearing smile. Even her screams are cute.

Although it would’ve been a sight to see, it’s probably best that the performance ended before the song’s “F**k you, I won’t do what you tell me” outro. We’ll leave that line to Zack de la Rocha when Rage finally do return to touring.

Rage Against the Machine were forced to postpone their reunion tour’s entire first leg, which was set to run from March 26th through May 20th. They were also slated to headline Boston Calling on May 23rd and Firefly on June 19th, but both of those festivals have been canceled.

As of now, the original second leg of the tour is still on schedule, kicking off July 10th in East Troy, Wisconsin, with tickets available here. However, there’s a strong chance that leg could be affected by the pandemic, as well.

Since being posted on Sunday, Audrey’s rendition of “Killing in the Name” has racked up more than 1 million Facebook views. Watch the clip below, and then check out another sweet video in which a young girl learns how to mosh at a metal festival.