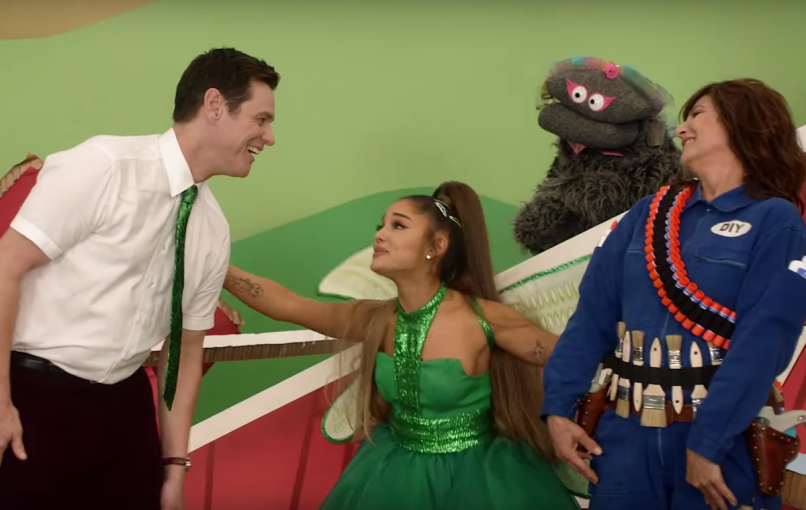 Years before launching a proper recording career, Ariana Grande got her start performing as part of various children’s musical theater productions and on Nickelodeon teen show Victorious. The global pop star has now returned to her youthful TV roots by appearing on the latest episode of Kidding, the Showtime series starring Jim Carrey and executive produced by renowned director Michel Gondry.

Grande’s character was named Piccola Grande (aka the “Pickle Fairy of Hope”), and she performed a song called “Stick Together” with the help of Carrey, a host of colorful puppets, and regular Kidding cast member Catherine Keener. She also sang a shorter, slower tune while perched up on a tree branch.

The thank u, next artist and Carrey filmed the episode last summer, which Grande described as “a DREAM of an experience.” She gushed further about the collaboration on Instagram back in July, writing,

“I’ve been staring at my screen and no words do this moment justice. thankful for the most special experience of my life. nothing is crazier than getting to work with and spend time with someone whom you’ve idolized and adored since before you could speak. actually, what’s even crazier is discovering that person to be more special and warm and generous in person than you ever could’ve imagined. i get to make a tiny appearance on the hilarious and deeply moving show Kidding next season. this was a DREAM of an experience. thank you thank you thank you Jim and thank you Dave for having me. i have so much more to say but words actually can’t …. cover it.

Watch both of Grande’s Kidding performances below. Grande recently performed a medley of hits at the 2020 Grammys. If BTS get their wish, Grande and the K-pop megastars just might have a collaborative single on the way.