TV Review: Locke & Key Works Best When It Stops Trying to Be Cool and Edgy 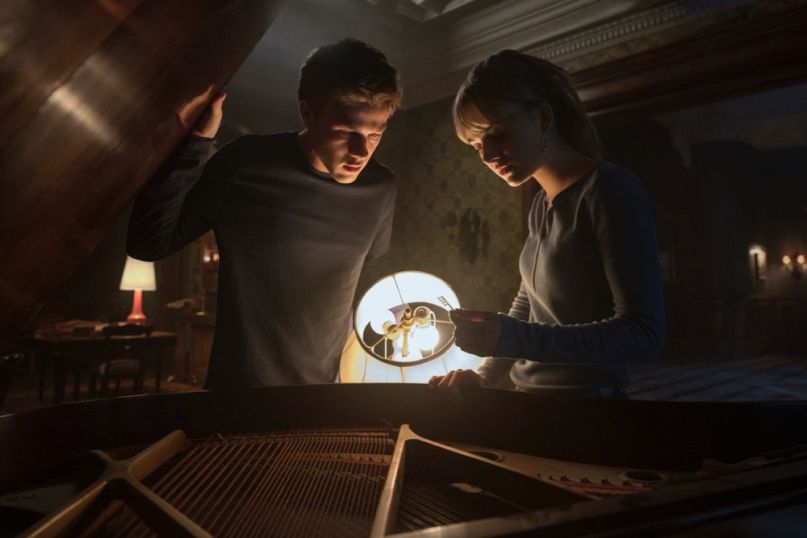 The Pitch: A few weeks ago, high school guidance counselor Rendell Locke (Bill Heck) was shot by troubled student Sam Lesser (Thomas Mitchell Barnet). His widow Nina (Darby Stanchfield) has moved her children Tyler (Connor Jessup), Kinsey (Emilia Jones), and Bode (Jackson Robert Scott) to Key House, their father’s ancestral home, in the hopes that she can clean it up and sell it and then try again someplace far away. Of course it’s not easy when your husband and father was a hometown hero and thus everybody knows he’s dead. Tyler leans into the tragedy, letting the sympathy of cute girls and peers help him get acclimated to life at his new school. Kinsey has a harder time and is also reluctant to grow close to anyone new in the wake of the tragedy, especially classmate and budding filmmaker Scot (Petrice Jones), who develops a crush on her right away and tries to ingratiate her in his friends group. Bode doesn’t make many friends, either, just Rufus the groundskeeper (Coby Bird) and the mysterious voice at the bottom of a well on the edge of the property. But that’s probably nothing to worry about. It certainly doesn’t portend a host of secrets buried in Key House and a conspiracy of silence surrounding Rendell Locke’s past.

I’ve got a brand new pair of roller skates… Joe Hill’s graphic novel Locke & Key has been crawling its way towards screens ever since it was published in February 2008. The great Mark Romanek directed a pilot for it in 2011, which was never aired, and then film ideas were kicked from producer to producer until finally they landed at Netflix as a series. Hill remained in charge of the writers’ room and Lost and The Strain’s Carlton Cuse and The Haunting of Hill House’s Meredith Averill boarded as showrunners. The first thing they did was temper down some of the broader historical cosmic horror of the comic (the first edition was called Welcome To Lovecraft, to give you some idea of how different the first season of the show is from the opening of the source) and the second thing was to give it a tone that nestles perfectly into the modern, supernatural teen landscape. The way that the adolescent drama and magical elements are handled is similar to that of Netflix’s The Chilling Adventures of Sabrina and 13 Reasons Why, and should give flashbacks to both CW’s Vampire Diaries and HBO’s True Blood, the well-spring from which the modern era of sexy ghouls and goblins emerged.

…and you’ve got a brand new key: The show is extremely progressive in its world construction. The town of Matheson — as in Richard Matheson, author of I Am Legend and a metric ton of classic horror films and TV (in-jokes like that are everywhere in this show a la The CW’s similarly hip Riverdale) — is initially pitched as a kind of backwater forgotten by time. Of course, the only people the Locke children meet are all model handsome and racially diverse, like the inexplicably British Scot whose presence (the statuesque Jones looks every day of his 27 years) is never less than jarring. The show sweats a little trying to be all things to all people, tailoring itself perfectly to this moment, terrible pop songs and all. Is it a love letter to the horror films that Hill grew up watching with his dad Stephen King and that Scot wants to emulate with his own micro budget movies, a B plot a little too cute for its own good? Is it a Gorey-esque, family-oriented magical mystery like A Series of Unfortunate Events? Is it a pitch dark series about a cutthroat magical entity who will kill any and everyone in its path? It can’t quite be all three, though it certainly tries. The show’s frequent and breathlessly presented mystical interludes (The Chronicles of Narnia is invoked with good reason) will never not sit strangely considering the show’s frequently grim murders and subsequently chronicled PTSD episodes. The dominant tone is one of impish mischief, personified by the remarkably fulsome and lovely score by Torin Borrowdale, but that’s all too frequently deflated by the death of innocents.

Lock, Stock, and Barrel: All the above notwithstanding, the show succeeds as a runaway freight train of a narrative. Between the hired guns in the director’s chair (Vincenzo Natali is the biggest name on the bench) and the raft of veteran TV writers hammering the unruly source material into 10 watertight 45 minutes with as many as five POV characters, the show moves at exactly the pace it needs to in order to survive. By the time its many threads start to come back together, and the shape of the narrative’s revealed, the logical inconsistencies have mostly receded into the background. It is quite impressive to see the world dreamt up by Hill, Cuse, Natali, Averil and the rest off the creative team. There are trips into subconsciouses, haunted caves, doppelgängers, monsters, and elements conjured from nothing. Hill’s quite obviously paying tribute to his dad’s writing as much as Friday the 13th, Day of the Dead, or Halloween (all name dropped or watched on the show). There’s a little Firestarter, a little The Dark Half, a little The Dark Tower, and a little It, to name just a few. And all the reference points, to say nothing of the best of the performances, mix into a narrative juggernaut that flattens objections and makes with the thrills.

The Verdict: It’s debatable whether another magical soap opera is what anyone desperately needs right now, and Locke & Key never quite stops auditioning to be a replacement series until about the 8th episode. By then, you’ll know whether you care enough about the Locke children solving the mystery left behind by their father. By then, you’ll likely be charmed by the players, the jambalaya of allusions, the agreeably atmospheric setting (not just the lovingly designed Key House but the fictional seaside hamlet in which it rests), and the metaphysical puzzle at the show’s core. The way that the inner workings of the mind are displayed here are frequently stunning in their creativity, even though they undoubtedly breathe more on the page. In the end, Locke & Key is at its best when it stops trying to be cool and edgy and gives into the earnest spectacle of kids getting pieces of their father back through unexplainable forces. That is a hugely engrossing and affecting idea that keeps the show afloat at first and makes it truly sing at last.