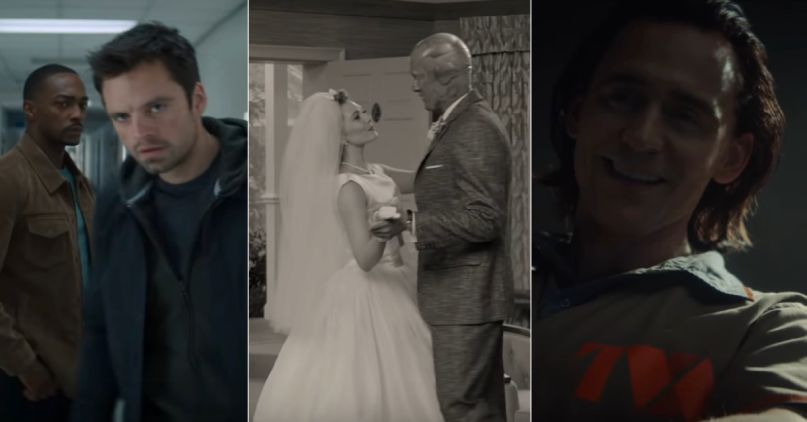 Marvel's The Falcon and the Winter Soldier, WandaVision, and Loki coming to Disney+

Our first look at Marvel’s initial slate of episodic series for Disney+ aired during the 2020 Super Bowl, and it’s as hyped-up as expected. The “Big Game” spot included footage of The Falcon and the Winter Soldier, WandaVision, and Loki.

As the first TV show from Marvel Studios for Disney+, The Falcon and the Winter Soldier is primed to be a big deal once its premieres later this year. It follows Sam Wilson (Anthony Mackie) as he takes the title of Captain America and Bucky Barnes (Sebastian Stan) in the aftermath of Avengers: Endgame. When it comes to the overall mood, the series reportedly takes the action-packed adventure of the MCU and combines it with the crowd-pleasing humor of Captain America: Civil War. No wonder it’s one of the 50 most anticipated TV shows of 2020. The 30-second Super Bowl spot opens on Captain America’s shield and shows it being hurled off into the woods. Later, we get a glimpse of the series’ main antagonist, Baron Helmut Zemo (Daniel Brühl), making his return after Black Panther at the end of Civil War.

Taking place after the events of Avengers: Endgame, WandaVision follow Elizabeth Olsen as Wanda Maximoff, aka the Scarlett Witch, and Paul Bettany as Vision in a sitcom-like manner, offering a more lighthearted tone compared to other MCU works. Of course, the Vision died in Avengers: Infinity War, and Wanda flashing through different classic sitcoms (Brady Bunch, I Love Lucy, Leave It to Beaver… Family Ties, maybe?) can’t be a good sign. It does, however, gives us a look at Scarlett Witch’s classic comic costume when she enters Bewitched. Like The Falcon and the Winter Soldier, WandaVision is slated to premiere in 2020.

Loki will follow the version of Tom Hiddleston’s character seen briefly in Avengers: Endgame escaping with the Tesseract, aka the Space Stone. The belief is that he’ll use that Infinity Stone to mess with different realities, which fits into what Marvel chief creative officer Kevin Feige said about the series having a direct connection to the Doctor Strange sequel, In the Multiverse of Madness. (WandaVision will connect to the movie as well, with Olsen expected to co-star.) In the Disney+ teaser, we see Loki in a prison uniform stating, “I’m gonna burn this place to the ground.”

For such a short trailer, it definitely squeezes a lot in. Check it out below.