Film Review: Birds of Prey Feels Like a Bunch of Bazooka Joe Comic Strips Rubber-Banded Together 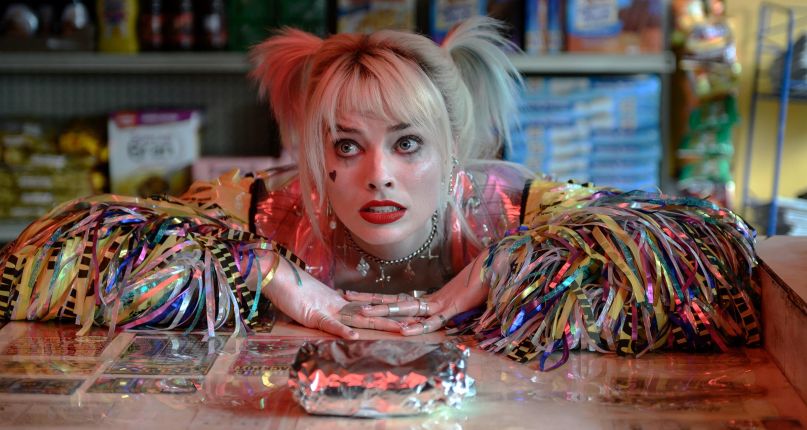 The Pitch: They say that diamonds are a girl’s best friend. Actually, in Birds of Prey (and the Fantabulous Emancipation of One Harley Quinn), they sing this. In a fantasy sequence. But more on that later. Maybe.

To be more exact, diamonds can possess a laser-encrusted coding that allows criminals to access an offshore bank account with all the money in the world to fund infinite crimes. Harley Quinn (Margot Robbie) is on the trail of that plot-driving diamond. Most of all, diamonds are a good enough excuse to get things going in the giddy sticker-book actioner Birds of Prey.

Also on the diamond’s trail: Nepotism- and salmon blazer-fueled gangster Roman Sionis (Ewan McGregor, eating the whole ham), who needs it to take over Gotham; Roman’s sidekick, Victor Zsasz (Chris Messina), a gold-toothed stabbing machine; Dinah Lance (Jurnee Smollett-Bell), Roman’s scarily high-pitched club singer and driver; Renee Montoya (Rosie Perez, as good as she’s ever been), a burned-out detective just trying to do the right thing in a man’s-world police department; and Huntress (Mary Elizabeth Winstead), a bow-wielding, socially awkward assassin. All of them want the rock, which is currently nestled in the intestines of a young pickpocket named Cassandra (Ella Jay Basco). Yes, she swallowed the diamond.

Egg Upon Egg Upon Egg On Its Face: The diamond stuff? It’s an excuse to get a decent set of characters together onscreen in a kaleidoscopic chase flick with personality to burn.

Sequin fanny back-level visuals, wise-ass gags, and non-sequiturs fire off aplenty in Birds of Prey. There’s the erotically photographed fixing of an egg sandwich, scored to the sensual sounds of Barry White and narrated with glee by an enraptured Robbie. There are text-and-doodle gags showing up time and time again to remind viewers of who characters are, and how Harley Quinn pissed them off; “Grievance:” is the label repeatedly used. Even the opening credits spring right out of the Ren & Stimpy school to illustrate the titular antiheroine’s backstory and credentials (“I have a PhD, motherfucker!”).

Birds of Prey just piles it on, and the longer the movie runs, the less exhausting it feels, and the more delirious it grows. For a proverbial dumb-but-fun comic book, director Cathy Yan and writer Christina Hodson nail the “fun” part with attitude, charisma, and momentum. The motivations matter less than the material, if that makes sense. Like, again, the diamond retrieval does not matter. These weird people, how they behave, their quirks, their fashion sense, their skills with weapons, and what color everything’s all framed in? That is what matters, and it’s a lot of really good stuff to rub in your eyes. And through that lens, Birds of Prey is like watching Tony Scott come back to make a fuchsia-funk camp actioner.

The film’s galloping cadence keeps even the thinner moments breezy. When the material gets stiff, move on to the next thing. Change the conversation, as they say. Harley goes on a bender to end all benders, but just when things start to look tragic, the movie pivots to Dinah beating up baddies. Grossed out by Zsasz carving people up? Han and Hodson whip over to McGregor preening about boogers. Birds of Prey does everything in its power to keep things lively, and it gets by on its own supply.

Clips the Wings, Maybe Just a Little: But still, would it have killed editors Jay Cassidy and Evan Schiff to slow down? Look, the adornments are a blast. A stuffed beaver in a tutu? In a room with a hyena? Followed by Harley watching Looney Tunes over breakfast cereal? Great! Keep pulling ideas from the Lisa Frank portfolio of mayhem. But along the way, the narrative struggles to keep all of its plates spinning at once.

In a bid to deconstruct Birds of Prey as something like Pulp Fiction for the youths, Cassidy and Schiff will open a scene, and then allow Quinn to pause for an account of how events from days ago led to this moment. In fact, she does this several times over at one point. A shooting in a police station rattles its way through four flashbacks. This is how you slow down a movie that was in a state of perfectly decent momentum.

Fowl Play: On the other hand, the action scenes are boss, and Robbie is a Star. A staaaaaahhhh. She’s having what some might call a Nicolas Cage-in-1996 moment here, as an Academy-appreciated talent blasting out in a display of chops and screen presence. She’s got Rick James aura, baby. She took a severely under-written side character from a David Ayer movie, made herself a super-force with it, and spin her Harley concoction into an A-list showcase with Birds of Prey.

Picture if you will: The bad guys are on the run in their black sedans, and Harley’s gotta catch up. What’s her vehicle for the chase? A scooter? A tank? Nah, ‘80s rollerskates. As staged by the John Wick team (Chad Stahelski directed the second unit, in fact), Harley swings and swirls and smashes men’s faces with her own thickly colorful wheels. She sells crazy. She looks the part. And those delights, and that credibility of indisputable star power, are hard to find these days.

Verdict: Here’s a comic book movie not necessarily striving for great heft, even if this does give Robbie more time and pathos than her stint in Suicide Squad. No, Birds of Prey is something sillier and more page-turning than most recent hits. This is a comic book movie that feels adapted from a bunch of Bazooka Joe strips rubber-banded together. It’s a big ball of candy, mushed together and flung at the wall, and we’re all invited to happily take a bite out of crime.

Where’s It Playing? Birds of Prey is nesting on thousands of American screens this weekend.