The Good Place Left Us With All the Right Questions 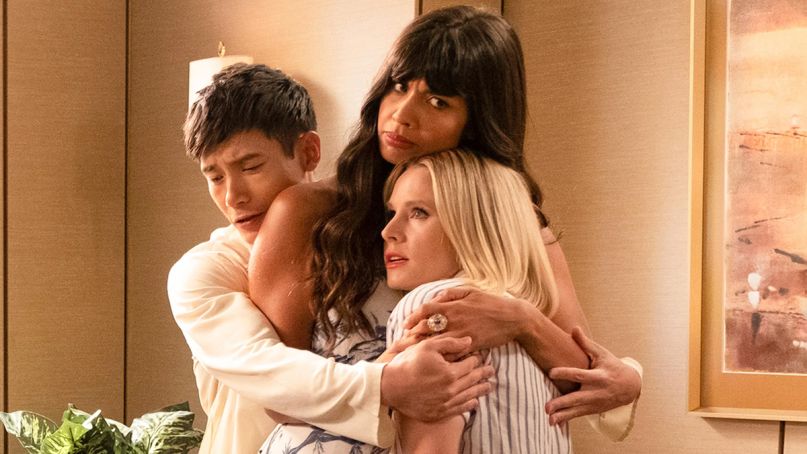 (Note: The following editorial contains light spoilers for last night’s series finale of The Good Place, as well as the show at large.)

Years from now, as audiences continue to discover The Good Place, Michael Schur’s just-concluded 52-chapter afterlife comedy, it wouldn’t be surprising in the slightest if the fact of its airing on NBC is met with the same shock as people have upon learning of ABC being the original home of Twin Peaks. While it’s true that neither networks nor television are the same as they were 30 years ago, when the latter redefined what serial broadcast television could look like, The Good Place has a strong chance of standing as a similar storytelling touchstone of the medium. The network behind several of the most definitive modern sitcoms (Seinfeld, Friends, The Office) can now say that it, too, aired one of the boldest, most audaciously original series of its own time.

It’s often a fool’s errand to declare anything an instant classic, inasmuch as it’s impossible to determine what will continue to resonate with audiences over time, especially when we’re discussing a show full of references to The Leftovers and Internet discourse. But it’s tough to imagine any Good Place devotees ever letting go of the heady concepts or the barrage of punchlines that Eleanor (Kristen Bell), Chidi (William Jackson Harper), Tahani (Jameela Jamil), Jason (Manny Jacinto), Janet (D’Arcy Carden), and Michael (Ted Danson) have left behind. The Good Place spent most of its run following one of the great Peak TV cliffhangers, with that shocking first season finale and that goddamn laugh, on a series of brazen narrative stunts that played on the expectations of series that had come before even in order to demolish the rules. For sitcoms, for TV, for the kind of quality that a prime half-hour slot on Thursday nights can yield.

Starting with the simple elevator pitch of what happens when an everyday screwup dies and is sent to the Good Place by mistake, instead of a Bad Place that still doesn’t quite seem appropriate for the life she lived, The Good Place entrenched its four seasons in a particular kind of contemplation, one tailor-made for a generational audience secular enough to not be left enraged by a series treating heaven and hell as comic sandboxes. However, The Good Place rooted itself not in any one religious ideology (even as it henpecked from many throughout its run), but in philosophy, and specifically in the ways philosophy can transition out of being a theoretical exercise and into something we use to sharpen ourselves and one another. Among its many lessons: You have to take that second step, or else you end up like poor Chidi, determined to “solve the puzzle” of human morality until the day an A/C unit falls onto your head thanks to your constant indecision.

The disorientation of trying to understand where we exist along the spectrum of good and evil is captured faithfully throughout the series, and that particular trait situated The Good Place as one of the more prescient series of a television era overflowing with series attempting to capture How We Live Now. It has a strong chance of going down as one of the best of those, and the most accurate, by using rapid-fire lapses in both time and plot to capture the terrifying pursuit of truth and love and connection in a world that continues to change the rules, punish the undeserving, and function on no seeming logic at all, basically all the time.

It’s easy, and incredibly common (especially these days), to slide into isolation and ironic nihilism as a coping mechanism against the horrors of daily life. But even as The Good Place never entirely condemned that practice, it also never asked you to look any farther than Eleanor to understand why that’s not a permanently viable way to exist. For a self-professed Arizona dirtbag, being “better” after death was only a first step, however important. Realizing that she’s a good enough person to deserve more than the comfortable distance of self-styled loneliness, and that true purpose lies in the messy, never-ending effort of forming and maintaining personal connections? Now there’s a boulder to shove up a hill. It’s worth shoving, it truly is, but it can’t and shouldn’t be done alone.

The show’s pleasantly lit aesthetic, twinkling score, and playfully online pop culture references always served to gentle the existential dread at its center, and kept things palatable in a way that encouraged audiences to wrestle with its ideas after the episode was over. After all, there are few other ways to stage a half-hour comedy that also at one point bloodily plays out the potential outcomes of the famed Trolley Problem, and at another, briefly suggests that all of humanity deserves to be eradicated and reset because of the colossal failures of the whole experiment so far. But the same unyielding idealism that made Leslie Knope an icon of optimism became the show’s ideological calling card. In that way, The Good Place borders on the radical by imparting one of the simplest ideas in the world: by pushing ourselves to be better, and those around us, the world becomes a little more fixable.

Whether you find that notion naïve or inspiring, the series was imbued with such willingness to constantly interrogate its own questions that it somehow matched its storytelling both to dedicated viewers’ keen eyes for Easter eggs and foreshadowing, and to the thought processes that anybody with a Twitter account struggles against on any given day. What’s the purpose of goodness when the system rewards abject cruelty? What’s the value in asking somebody to be better if their goodness has to be dragged from them, step by step? If we learn to be better for the sake of other people, are we actually growing or just trying to appear more decent to those around us? These, and questions like them, aren’t easy, but neither is being alive in the first place. The effort is the thing, and that effort is what so much of The Good Place wound up being about, concept episodes and staggering twists and Jeremy Bearamies notwithstanding.

Since there’s no real solution to any of the show’s heady questions, it could’ve theoretically gone on forever. Crucially, last night’s series finale not only brought it to a satisfying and tear-rending conclusion, but explored why it needed to conclude, and beyond that, why all stories eventually need to conclude. There may never be enough time on Earth, but even if there were, the show’s final few episodes considered how eventually even the reward of eternity would yield its own deadening effect. In the series’ estimation, uncertainty of the answers to life’s great questions, and the things we do to try and answer them, is the real purpose of being alive at all. There’s still purpose even after you answer all the questions, but that purpose is mostly derived from what you leave in the world, and in the people you were able to connect with while here. Once they’re gone, life may not be worthless, but it won’t be the same either. And it’s not bad, but it won’t be as good as it was.

Non-permanence terrifies us because it offers a reminder that anything and anyone can disappear at any time, and that the things we find most comforting and familiar always have the potential to be abandoned by time and memory. But trying to force another person or thing you love to never change or grow so that you can avoid the inevitable is the epitome of selfishness, and in the show’s beautiful series finale, The Good Place illustrates as generous a vision of the world, and of us within it, as any series ever has. Making connections is one of the most essential things we can do with our time, but being able to let them go when it’s time, whenever that time is, and even if it’s painful to watch them go, might be the noblest thing we can do for each other. All we can do is be better to and for others, and when we can, gently encourage them to take it sleazy.