The bill also included Stick to Your Guns, Rotting Out, Candy, and SeeYouSpaceCowboy 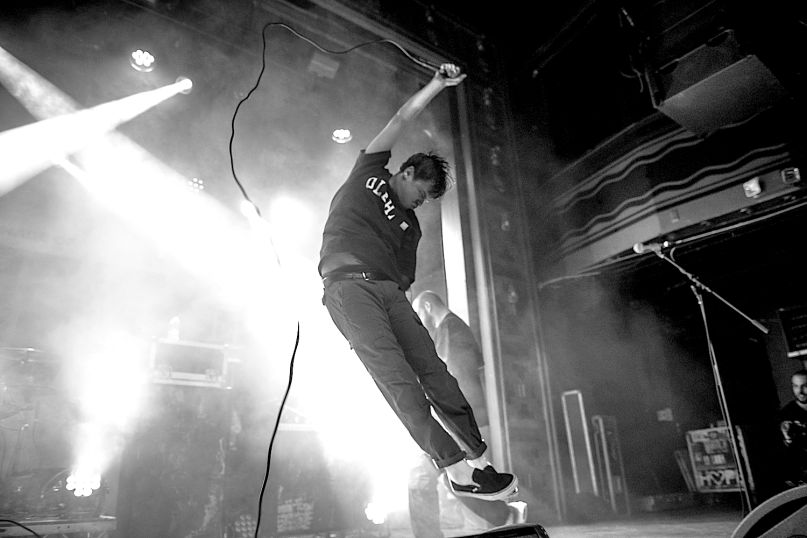 Setting the stage: Knocked Loose played Webster Hall in New York City for the third time on Sunday. The Kentucky hardcore band previously played the venue’s basement Studio (400 capacity), then the Marlin Room (600 capacity), and now they were headlining the Grand Ballroom (1,500 capacity) of the recently renovated space — a testament to their growth musically and in popularity following the release of their sophomore album, A Different Shade of Blue, back in August. Throw in a stacked touring package of support acts (Stick Up Your Guns, Rotting Out, Candy, and SeeYouSpaceCowboy) and the bill became a destination show for hardcore fans in the Tri-state area.

Taking the stage: The six-band bill made for an early 6:30 p.m. start as fans trickled in for the local opener Combust and metalcore upstarts SeeYouSpaceCowboy. During the latter’s set, the room still hadn’t filled out, leaving a massive open space on the main floor for the slam dancers, who spin-kicked and pirouetted their way into fellow audience members. Their acrobatics — some combination of break dancing, karate, and rhythmic flailing — appeared downright dangerous to the unsuspecting onlooker, and it only got more chaotic from there.

Whereas SeeYouSpaceCowboy’s mathy stop-starts occasionally disrupted the moshing, the more consistently rhythmic metalcore of Candy kept the physical activity at full tilt. Full-speed hardcore was mixed with satisfying sludgy breakdowns and tempo changes derived purely for the sake of keeping the pit active. Following Candy, California hardcore punks Rotting Out brought a distinctly old-school vibe to the stage, channeling New York Hardcore as hulking vocalist Walter Delgado let loose personal and passionate pleas on the mic. By now, the room had filled up, and the pit in the center of the floor was growing in number and intensity.

A scary moment occurred during Stick To Your Guns’ set when vocalist Jesse Barnett tried to incite the crowd to storm the stage, which isn’t allowed at Webster Hall (despite the venue’s leniency toward brutal moshing in the pit). He compared the security guards in the photo pit to police officers, calling them “just a suggestion.” “If you want to get up here, then get up here,” he yelled. During the next song, one fan tried to do just that, leaping the barrier only to be grabbed by a burly guard as he tried to make his way onstage. While the guard was wrestling with the flailing fan, Barnett lassoed the mic cable around the guard’s neck and yanked him. Enraged, the guard needed to be calmed down by fellow security as Barnett stared him down. Yes, hardcore preaches anti-authoritarianism, but that was a particularly dangerous move by Barnett on a guard who was just trying to do his job. Otherwise, it was a powerful set by Stick To Your Guns, who whipped the perilous pit into its most chaotic state of the night thus far.

Before Knocked Loose went on, a baffling mix of country songs blared over the PA, giving the audience an aural palette cleansing. LeAnn Rimes’ “Blue” delivered the punch-line reference to the band’s new album, signaling the beginning of their wildly entertaining set. They opened with “Trapped in the Grasp of a Memory” and “All My Friends”, sending the pit into a violent frenzy of spin-kicking thrashers and dive-bombing maniacs who sprinted from one side of the pit to the other, launching themselves into those standing idly. Nobody seemed to mind; if you were on the floor, it was understood that you might leave with a couple bruises, broken eyeglasses, or a lost shoe. Guitarist Isaac Hale only incited the fray, jumping on the mic before breakdowns to shout “F**k this place up!” or “Go!” in a guttural voice. Singer Bryan Garris was a positive presence between songs, dedicating numbers to the LGBTQ+ community and “all the independent women in the audience.” He expressed genuine gratitude for the crowd in front of him: “I’ve said it over and over again, but the Northeast is the best place for shows.”

Ten of the 12 tracks on A Different Shade of Blue made the setlist, and many in the crowd knew all the words, proving their commitment to the young hardcore band. They shouted the chorus in “Belleville” and “Mistakes Like Fractures” right back at frontman Bryan Garris, whose distinct high-register snarl cut through the mix. Knocked Loose have stumbled on a formula that’s audience tested and approved, combining breakneck hardcore with crushing breakdowns befitting of death metal or something the late Jeff Hanneman of Slayer would’ve written. The band has certainly earned their way to the big stage of Webster Hall. “It means the world to us,” Garris said of their evolution from the venue’s basement room. At their current rate, Knocked Loose will only be playing bigger stages and larger venues as their fanbase grows and their songs get tighter, heavier, and faster.

Photo Gallery – Knocked Loose, Stick To Your Guns, Rotting Out, Candy, and SeeYouSpaceCowboy at NYC’s Webster Hall (click to enlarge and scroll through):

Knocked Loose Setlist:
Trapped in the Grasp of a Memory
Intro
All My Friends
Blood Will Have Blood
Belleville
Oblivion’s Peak
By the Grave
Denied by Fate
In the Walls
Guided By the Moon
Mistakes Like Fractures
Forget Your Name
Deadringer
Small Victories
…And Still I Wander South
A Serpent’s Touch
Billy No Mates
Counting Worms