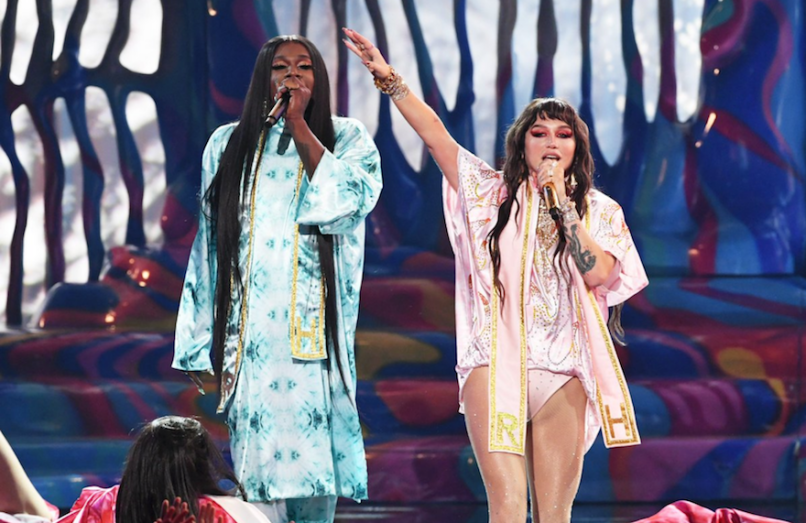 Kesha performed at the American Music Awards on Sunday night. For her set, she brought the Queen of Bounce, aka Big Freedia, onstage to join her in singing “Raising Hell” and “TiK ToK”. Rewatch it below.

It appears the duo’s performance of “Raising Hell” on Kimmel was just a warm-up for the bigger rendition they had planned. Kesha began her AMAs set by greeting the crowd: “Welcome to my Sunday service.” From there, she turned the awards show into her own religious program. Dawning satin gowns and Catholic stoles, she and Big Freedia began belting out “Raising Hell” while standing before stained glass windows. Right when it looked like their performance was coming to an end, they slipped in “TiK ToK”, her breakout hit from 2010, to remind everyone that she’s still just as confident and unapologetic as she was back then.


Watch Kesha’s full performance below, and check for more AMAs performances. Grab tickets to all of Kesha’s upcoming concerts here.

“Raising Hell” is the lead single from Kesha’s upcoming album, High Road. It’s the pop star’s fourth studio album and her follow-up to the Grammy-nominated Rainbow from 2017. In addition to Big Freedia, the album features several notable collaborators and guest features, including Brian Wilson, Sturgill Simpson, Dan Reynolds of Imagine Dragons, and Nate Ruess of fun. It’s due out January 10th via RCA and Dr. Luke’s Kemosabe Records.

Wait, isn’t it weird that she’s releasing High Road on Dr. Luke’s label given her ongoing legal battle with the producer? Well, that’s one of the many messed up parts about the pace at which legal battles unfold. Kesha accused Dr. Luke of drugging and raping her. She also claimed that he raped Katy Perry. Lady Gaga was subpoenaed to testify in the case and she took Kesha’s side. In her unsealed deposition, Gaga continued to valiantly defend her with the utmost grace. That case has yet to come to a close, though, so Kesha is still bound to her legal agreements — including her contract with Dr. Luke.

Kesha performing the song that started the decade at #1 for 9 weeks at the last 2010's award show. #AMAs pic.twitter.com/Sp7L2ymJIW