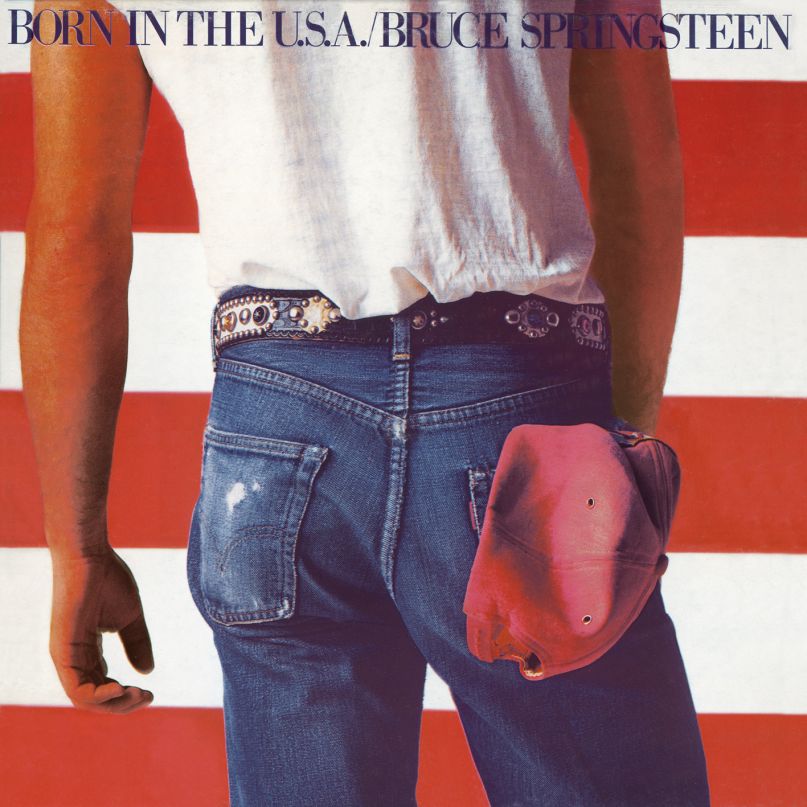 There are, famously, countless opportunities to misunderstand Bruce Springsteen’s seminal 1984 LP, Born in the U.S.A.. Before hearing the record, listeners first confronted the now-iconic cover of Springsteen’s rear end poised before the stripes of the American flag. The photograph, taken by Annie Liebovitz, accentuates Springsteen’s buff arms, blue-collar sensibilities, and apparent patriotism. The same symbols are infused into the title track, which opens the album, from the muscular backbeat to the anthemic invocation of birthplace. What can easily be misconstrued as jingoism led the song to be co-opted by the very movements it railed against, including Ronald Reagan’s reelection campaign, and it is still a staple backdrop to fireworks shows and baseball games.

But the track, like the album, is anything but a celebration of the Stars and Stripes, and the struggle to make that clear has been a central part of the album’s legacy. Beneath the fanfare, “Born in the U.S.A.” is an indictment of the Vietnam War and the neglect of veterans. Always integral to Springsteen’s message, it laments the brokenness of the American working-class dream: “Down in the shadow of the penitentiary/ Out by the gas fires of the refinery/ I’m 10 years burning down the road/ Nowhere to run ain’t got nowhere to go.”

In retrospect, it’s easy to see how this message went awry. Why bury vocal criticism in synth-laden, upbeat melodies? But the choice seemed part of a larger mission on Born in the U.S.A.: rooting an adamantly anti-American message in a profound love for America and its sound. As Debby Miller wrote in her review for Rolling Stone: “The music was born in the U.S.A.: Springsteen ignored the British Invasion and embraced instead the legacy of Phil Spector’s releases, the sort of soul that was coming from Atlantic Records.” Take the rockabilly of “Working on the Highway” and the honky-tonk sentimentality of “Darlington County”, both musically jovial songs that tell stories of working-class tragedy. Born in the U.S.A. is, in other words, an optimistic album, even as it is a critical one. It seems to argue that one can both love America and rage against its brokenness.

This optimism worked in Springsteen’s favor. Born in the U.S.A. was his most commercially successful record, featuring seven top-10 singles. By 2012, it had sold 30 million copies, making it one of the highest-selling albums ever. It arrived on the coattails of 1982’s Nebraska, Springsteen’s acoustic masterpiece, which dealt with many of the same themes — downtrodden, blue-collar characters, criminals, luckless gamblers — but in a far more somber tone. Born in the U.S.A. saw Springsteen transmuting the depressing lamentations into palatable mainstream modes, injecting his songs with verve and humor. Take the washed-up nostalgia of “Glory Days”: “She says when she feels like crying/ She starts laughing thinking about/ Glory days.” Laid over a twanging electric guitar and two-bit organ, the music cheekily embodies its corny American wistfulness.

The first few tracks are signature E Street Band: “Cover Me” features Steven Van Zandt’s squealing lead guitar, and “Darlington County” gives us our fill of Clarence Clemons’ gravelly saxophone. This culminates in “Downbound Train”, a tragic rock ballad about a man who has lost his wife and now floats between jobs. In the final lines, the speaker hallucinates his wedding house and runs into the bedroom only to find, “The room was dark, our bed was empty/ Then I heard that long whistle whine.”

As this image of a phantom train settles, the album seamlessly transitions into one of Springsteen’s greatest songs, which is also most unlike anything else he had written up to that point. “I’m on Fire” is melancholy in the way Nebraska is, a spare, spacious love song, but instead of an acoustic guitar, Springsteen fingerpicks a palm-muted telecaster while an ethereal synthesizer hums in the background. The track closes side one, leaving a hushed, solemn interlude in the center of a mostly upbeat, ebullient album. It seems symbolic, both structurally and musically, as if marking a turning point in Springsteen’s career from middle-America heartland rocker to synth- and dance-influenced mainstream star.

Interestingly, Born in the U.S.A. did become a watershed moment in Springsteen’s career, but perhaps not in the way he envisioned: he arguably didn’t make another good album until The Ghost of Tom Joad 10 years later, another mostly acoustic project, and then not for another eight years until The Rising in 2002. The records in this middle period found Springsteen wading too deep into the pop sound he had discovered on Born in the U.S.A., often creating schmaltzy and unremarkable works.

This could partly be explained by the fact that during those 18 years Springsteen was no longer collaborating with his longtime backers the E Street Band. Much of Born in the U.S.A., in fact, feels like a farewell. Side two starts with “No Surrender” and follows with “Bobby Jean,” both poignant songs about childhood friendship that seem dedicated to the departing Van Zandt, who Springsteen had been friends with since his youth. “In some motel room there’ll be a radio playing,” he sings on “Bobby Jean”. “And you’ll hear me sing this song/ Well, if you do, you’ll know I’m thinking of you.”

The following two tracks, “I’m Goin’ Down” and “Glory Days”, each exhibit a more frivolous side to the album, with the former devolving into meaningless gibberish in the final chorus and the latter one of the more famous accounts of American sentimentality in rock and roll history. But the closing tracks of Born in the U.S.A. are where Springsteen truly breaks new ground in his artistic development. “Dancing in the Dark” and “My Hometown” are a powerful coda to the end of side one, two synth-centered pop songs that effectively signal the passing of Springsteen’s tenure as a heartland rock doyen.

“Dancing in the Dark” became his biggest hit ever, and the moment in the song’s music video when Springsteen pulls a young Courtney Cox onto the stage has become a cultural hallmark. It remains one of Springsteen best songs, further proof of his ability to finger the pulse of a particular kind of disillusionment: “I check my look in the mirror/ I want to change my clothes, my hair, my face,” he sings over an infectious keyboard riff.

“My Hometown”, meanwhile, returns to the social issues that were more of a focal point on the first side of Born in the U.S.A.. The low-tempo, synth-driven song is one of his most effective and moving explorations of broken American politics, both incisive and melancholy. The refrain, “This is my hometown,” changes meaning as the song shifts its focus from adolescence to working-class life, racial violence, and post-industrial economic strife. It captures what “Born in the U.S.A.” failed to: the tragedy of the American dream, the brutality and injustice that is fundamental to American citizenship, and the complicated, intractable love for one’s home that still manages to take root in the midst of it all.

With the exception of “My Hometown”, one could argue that the most memorable songs from Born in the U.S.A. today are the ones that most push the envelope on Springsteen’s heartland rock tendencies — “I’m on Fire”, “Dancing in the Dark”– not the ones that are overtly political. That activist fervor, in fact, is in some ways buried by the style Springsteen tried to package it in: rather than finding a critical voice in a patriotic sound, Born in the U.S.A. seems to incidentally mark the waning of that patriotic sound as a useful form for political critique.

In 2018, after holding an eight-week solo residency at the Walter Kerr theater in New York City, a soundtrack and film version of Springsteen on Broadway were released on streaming services. During the show, Springsteen plays an almost unrecognizable version of “Born in the U.S.A.”. As his aged voice rasps over a hauntingly spare slide guitar, the tragic lyrics become staggeringly clear. The new iteration seems to suggest that the optimism of Born in the U.S.A. has not survived into the twenty-first century. But it also suggests that Springsteen has found an even more fundamental American music to voice his indictment of the country he loves: the blues.

Essential Tracks: “Dancing in the Dark”, “I’m on Fire”, “Downbound Train”, and “My Hometown”

—
Gabriel Fine can be found on Twitter at @_gabrielfine_