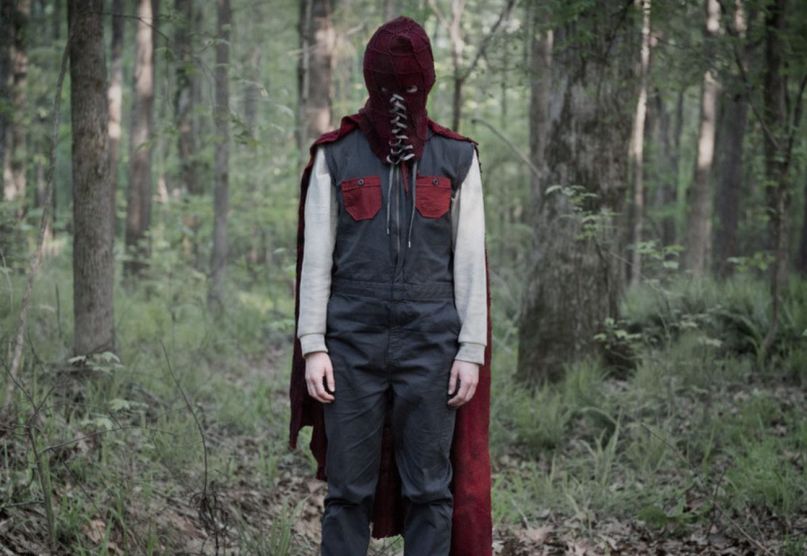 The Pitch: One night in Kansas, circa 2006, a young couple struggling to conceive have their prayers answered when a small spaceship crashes into their property, sheltering a newborn baby boy within it. Tori (Elizabeth Banks) and Kyle Breyer (David Denham) decide to raise the child as their own, never considering Brandon (Jackson A. Dunn) as anything other than their son. But on Brandon’s 12th birthday, he begins to go through the kind of changes that all young men do, along with a few that most don’t. As Brandon’s behavior grows increasingly aggressive, and violent incidents begin to pile up around the sleepy town of Brightburn, the Breyers are forced to confront the possibility that Brandon’s arrival may not have been a miracle, so much as a warning.

Preteen of Steel: Sound familiar? To its credit, Brightburn makes no bones about its existence as a riff on the Superman legend. From the alien spacecraft/womb to the red cape to the existential terror of a being more powerful than ourselves arriving on Earth, director David Yarovesky‘s feature is immersed in the instantly familiar details of one of comic lore’s most iconic origin stories. Yet as it progresses, Brightburn becomes increasingly less interested in deconstructing the character (and audiences’ expectations of it) and more in addressing, in gruesome detail, how goddamn scary Superman would be if he decided that humanity was worthless to him.


The screenplay, by Brian and Mark Gunn, begins with a compelling hook: what if a teenage boy, full of unchecked lust and rage, was told by the voices in his head that the world (and everybody in it) were his right to own, control, and even destroy? At times there’s a bracing modern analogy drawn through Brightburn; even as both his parents and the locals begin to grow increasingly worried about Brandon’s aggressive and erratic behavior, his unveiled threats and leering tendencies are written off as nothing more than a growing young man working through his feelings.

The early scenes carry a different kind of dread, one separate from the alien-with-superpowers variety that Brightburn ultimately embraces as it goes on. When Brandon crushes a female classmate’s hand for rejecting his advances, or manipulates Tori’s unyielding affection to talk his way out of trouble at school, there’s a gnawing sense of unease, one largely derived from the total plausibility of so much of the film’s setup. Up to a point, Brightburn is a movie about the potential consequences of assuming that boys are just being boys.

Supersploitation: Beyond that point, however, Brightburn is a horror movie of a much sleazier mold, and that contradiction between its two tones is where most of the trouble emerges. Given that the film is written by two Gunn brothers and produced by James himself, the Troma influence within the film is strong. This is the kind of horror feature where bodies are mangled but don’t die right away, where fluorescent light tubes burst into open eyeballs (in extreme close-up, no less) and shots linger on the worst parts of a car crash’s impact. Whatever deeper dramatic ideas Brightburn offers up are treated as window dressing after a while, dramatic background for watching a 12-year-old with heat vision slaughter innocents in graphic detail.

It renders the film unsettling in ways both intentional and arguably not; in short, there will be audiences who find a great deal of appeal in a preteen boy mowing down anything that defies him, and those who will reject the film entirely for the same reason. Yet Brightburn ultimately attempts to split the difference by appealing to both gorehounds and to those who like to “read” their genre movies, even as it’s much more invested in the former. As the film goes on, it’s left in the curious position of being at once an effective vessel for the kind of jaw-dropping (and -separating) shocks grindhouse lovers will appreciate, and a letdown given the intrigue of its earlier, more thoughtful ideas.

The Verdict: Brightburn offers a variant on the Rorschach test for moviegoers: depending on what each paid to see, it’ll either deliver in abundance or leave them wanting. It’s a nasty piece of work, and one that at the very least stands as an active interruption of the escapist, family-friendly superhero fare currently dominating the industry. Brightburn earns its R rating early and often, offering a vision of superheroics that will rightfully terrify starry-eyed young fans of the genre. (There is no sense in which this isn’t aimed directly at an adolescent audience, R rating or not.) It feels born from the conversations young comic book fans sometimes get into, lengthy debates about what superpowers could really do if they weren’t typically sanded down for the sake of a wide audience.

It’s escapist fare, at least for those who take their escapism with gallons of blood, tendons, and bone. It also could have been, and verges on being, more than what it seems to be. Just like Brandon.

Where’s It Playing? Brightburn offers summer moviegoers a different kind of superhero flick starting May 24th. Be a hero and get yourself some tickets now!