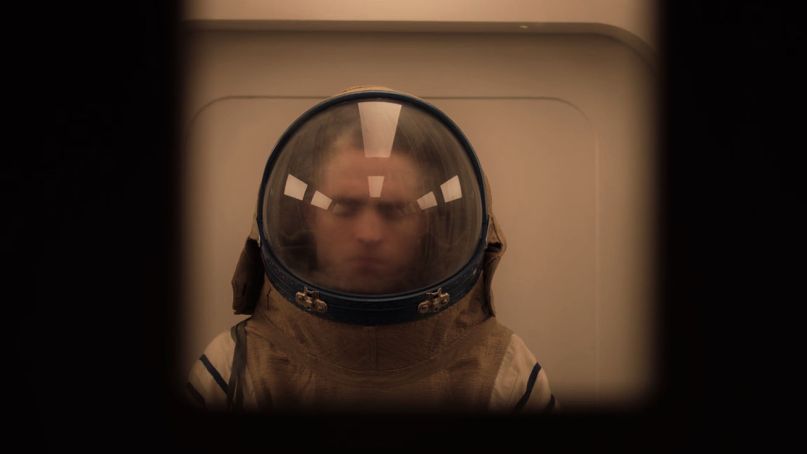 The following review was originally published as part of our coverage of the 2018 Toronto International Film Festival.

“In space,” the tagline for a very different kind of sci-fi film once argued, “no one can hear you scream.”

If we are to subscribe to Claire Denis’ vision of the universe, this doesn’t just go for literal screams of terror. In space, no one can hear your wails of despair and isolation, either. Much like on Earth, those cries of existential despair drift unheeded into the void. In her long-anticipated English language debut, the French filmmaking legend extends cinema’s long-term fascination with using galactic exploration to plunge the depths of human loneliness, reaching bizarre and depraved new heights (or lows?).

It all begins innocently enough, with Monte (Robert Pattinson) listening to a baby cooing through a makeshift monitor as he repairs a panel on the outside of a spaceship. This oddly charming and domestic spell is quickly broken when the baby starts crying, distracting Monte just enough to make him drop his wrench, which quickly and hauntingly fades out of reach.

It’s a subtly subversive way to start any movie set in space: centering the initial actions in a setting so often used as a backdrop for individualistic glory, or probed as a metaphor for strained human bonds, in the most primal and delicate of all human relationships, that of a parent and a baby. As we watch Monte, who appears to be alone on the ship except for this infant, bathe and feed her, and farm food for the two of them from the sparse ship’s surprisingly luscious gardens, it’s clear that High Life is going where few space films have gone before. But this veering-on-wholesome father/daughter adventure has some of its own expectations that will soon be all but completely undermined, as we begin to find out just how — and why — there are a man, a baby, and a cryogenic room filled with unconscious or dead crew people coasting toward a black hole with little to no contact or recognition from the outside universe.

Without giving away too much of the unspooling plot — which is really best enjoyed at its own shambolic pace, with little warning or preconceived notions — Monte and his company are convicts, given the option between death and/or incarceration on Earth, or to become guinea pigs for arcane experiments. This is how this particular misfit group of murderers winds up set adrift in the middle of a ceaseless nowhere, both physically and mentally, under the care/torture of a homicidal doctor (Juliette Binoche) with a twisted agenda.

In many ways, High Life is exactly as weird as it sounds. It is, after all, about a collection of violent people with proven impulse control issues being subjected to sinister tests and violations by an even more volatile scientist, while inching toward unknown doom (or salvation?) on a ship that looks like the sullen goth cousin of a Thunderbirds vehicle. And Binoche is truly a perverse delight as the sinister Dibs, perfectly straddling the line between camp and menace as she flounces around the vessel’s halls, delivering small monologues about her superior genius and evil.

Anyone looking for a full-blown orgy of outlandish spectacle and boundary-pushing will likely be disappointed, though. High Life is, at its lost and searching heart, every bit as stark and remote as its ship appears while suspended in the darkest reaches of space. This isn’t weird in the way that explosive works of provocation, or absurdity, or even loopy humor are weird. High Life is weird in the way that someone casually dropping a completely unnerving observation about the meaninglessness of life into an otherwise light and casual conversation is weird. It is, for all of its action, and unexpected hints of the underbelly of humanity, and bodily fluids, actually quite a languid, melancholy film. It doesn’t shock its viewers, nor does Denis seem to have any interest in doing so. It quietly, meticulously unmoors them instead.

With a casual, clinical clarity, Denis and her crew portray space travel for what it really is: an extension of humanity. All of our basest instincts and all of our fears will exist there, as surely as all of our best attributes and bravery. Whether we’re facing our futures from solid ground or the edge of a black hole, we’re still lonely, and terrified, reaching out to each other and trying to find someone or something to hold onto as we teeter on the edge of some abyss or other. Slowly but strangely, High Life delves into this with precision, wit, melancholy, a dash of existential angst, and maybe even a hint of wonder.