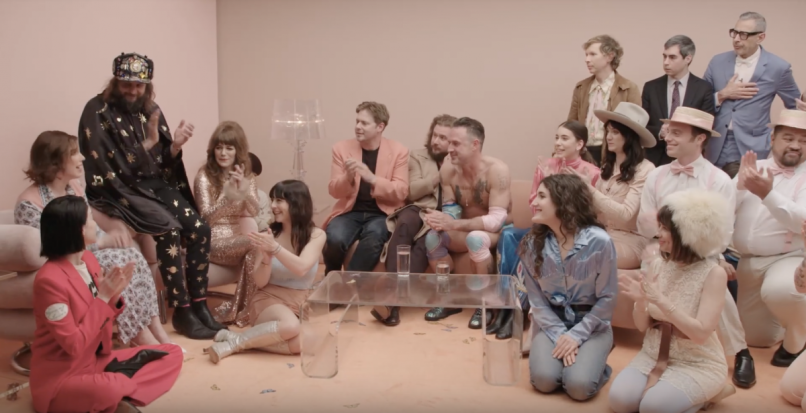 Back in December, Jenny Lewis announced her first album in five years, On the Line. Ahead of its release on March 22nd, the singer-songwriter previewed the new collection on Sunday with a three-hour digital listening party and variety show, co-hosted by Vanessa Bayer and Tim Heidecker.

On The Line sports a star-studded backing band, featuring everyone from Beck to Ringo Starr. Appropriately, a number of her frequent collaborators popped by to chat and perform, including Beck, St. Vincent, Nikki Lane, and Danielle Haim. Lewis’ own godfather, Jerry Cohen, stationed himself behind a vibraphone throughout. The stream also saw a number of other high-profile celebrities swing through the pastel studio, including actors and comedians Jeff Goldblum, David Arquette, and Natasha Leggero.


Notably, toward the end of the broadcast around the two-and-a-half hour mark, the program riffed off the idea of a drum circle (“We all enjoy them. That’s a fact,” stated Lewis), bringing together co-host Heidecker, actor Jason Schwartzman, and musicians Mac DeMarco, King Tuff, and Jim James for a ridiculous and off-kilter bass circle. With all five bassists on a revolving platform, the quintet laid out incongruent bass lines while Beck air-bassed from the safety of the couch.

Perhaps most importantly for Lewis fans, there were a number of On the Line previews scattered throughout the program. At one point, Lewis filmed a live music video for the track “Rabbit Hole”, and debuted a lyric video for “Red Bull & Hennessy”. There were also tastes of the album tracks “Heads Gonna Roll”, “Wasted Youth”, and “Do Si Do”. The latter track featured Beck, who appeared during the stream to break down the song’s recording process.

The listening party raised money for the Downtown’s Women’s Center, an organization that combats women’s homelessness in Los Angeles. In addition to streaming cuts from the Lewis’ fourth solo LP and hosting sit-down chats and live music performances, fans were invited to donate money for the chance to call in and speak with the singer and her various guests.

The program was charming throughout, despite aspects of the stream not going smoothly. The occasional dead air and other technological mishaps only added a level of sincerity to the bizarre and campy affair, helping the surrealist event mediate between irony for the sake of irony and presenting itself as a full-fledged joke.

Watch for yourself below.

Ahead of On the Line’s release, pick up Lewis’ other releases on vinyl over on ReverbLP. You can also grab tickets to lengthy upcoming tour here.

Below, revisit Lewis’ appearance on Kyle Meredith with…, in which she discussed the new record and “being emo as f*ck.”