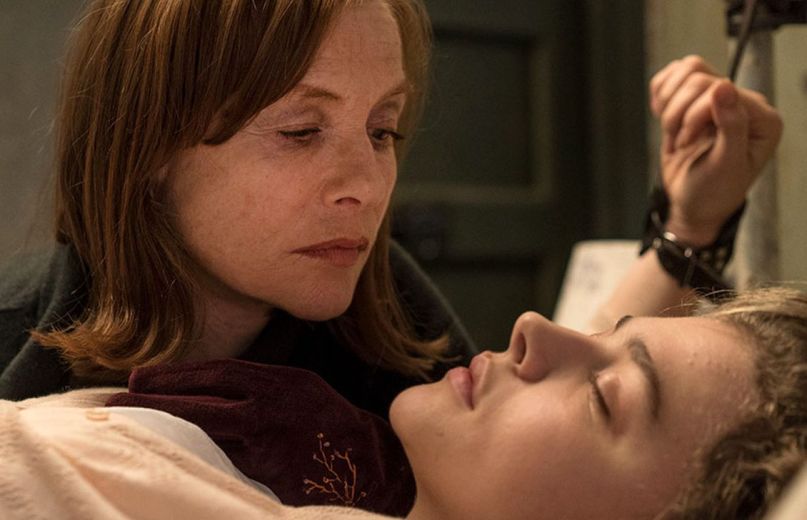 The Pitch: A young woman (Chloë Grace Moretz) in sensible shoes sees an expensive, green leather handbag seemingly abandoned on a seat in the subway. She does what people do where she comes from — she picks it up, and brings it to the lost and found. There’s no one there, so she makes up her mind to return it to the woman whose elegant, austere face is on the I.D. inside. Not such a grand idea, as it happens. As her roommate (Maika Monroe) tells her, that’s just not what one does in New York. You don’t return the bag. You call the bomb squad.

But return it she does, and finds herself tugged without much resistance into the orbit of Greta (Isabelle Huppert), a grieving woman in a little house tucked away from the street, like something from a fairy tale. When Frances (Moretz) discovers that something in Greta’s grief mirrors her own, she begins to cherish the connection as much as the older woman seems to. It’s not a good idea.

Is Greta for you? A quiz:

Please answer the following yes or no questions.

Do you love Isabelle Huppert?
Does the idea of hearing the same lovely piece of classical piano music so often that it becomes kind of maddeningly hilarious—does that appeal to you?
What about a horror movie in which a woman is terrorized and it has nothing whatsoever to do with sexual violence or “purity”?
Do you enjoy the occasional table-flip?
What about a major table-flip?
How about a nice wig?
Does the phrase ‘twirling around like a demented ballerina in unnecessary nylons’ sound like your kind of thing?
If a critic tried to make a note for every male character with at least one line of dialogue in a movie, and at the end of the movie the list was short and mostly consisted of things like ‘Cop’ and ‘Maître D’, and it was totally to the benefit of the film, would that interest you?
How much do you love Isabelle Huppert? Is it a lot?

If you answered ‘yes’ to at least two of these questions, Greta is definitely for you. If you only answered yes to the wig question, it’s debatable.

But seriously, how much do you love Isabelle Huppert?: If you’re at all into what the celebrated French actor (Elle, many others) is selling, Greta is frankly not to be missed. This is a film that plays bumper cars with its tone, sometimes leaning into moments of knowing camp — the aforementioned ballerina moment comes to mind, as does a scene with a cookie cutter and many, many shots of Huppert just standing still and staring — and other times asking us to invest fully in the interiority of its primary characters (as well as one we see only once and another not at all, both brought to the fore in a single excellent scene between Moretz and Zawe Ashton of Velvet Buzzsaw). That it stays grounded in the intimate moments is a credit to Moretz, but it’s Huppert who defines that careening energy. Greta is at times almost in on the joke, but it never strays over the line that separates the indulgent and self-satisfied from the clever and committed. It’s a masterful performance, incredibly satisfying and uncomfortable to watch, all at once. Moretz makes the movie work. Huppert is the entire thing.

I spy with my little eye: Huppert’s approach — ever-so-slightly in on the joke, but fully committed to the insanity — is mirrored by that of director Neil Jordan and cinematographer Seamus McGarvey (Atonement), who use the camera as though it’s an extension of Greta herself, sometimes gliding along silently and elegantly behind her new friend, sometimes staring unabashedly from a great distance, sometimes far too close. It’s alternately atmospheric and claustrophobic, and those who head into this thing unaware that some dark twists and turns are ahead will certainly get more than a few hints from the film’s method of capturing the story. It’s lovely, graceful, and wrong, all of it.

If anything, it’s sometimes so graceful that you can get a bit lost in the Liszt and cobblestones and the ever-rising dread, and come a bit unmoored from the film as a whole. (If you see it without knowing the runtime, try to guess when you walk out. You might guess 70 minutes, you might guess 150. Both would be reasonable.) That’s where Monroe’s character (and performance) come in handy. When Frances’ roommate Erica steps on screen, it’s like the scene in Mary Poppins when everyone starts to float and those left on the ground try to tug them back down. It lets just a little air out of the balloon, and a little rationality in. There’s more than a bit of fairy-tale dust around Greta — not that far off from Gretel, whose adventure with brother Hansel is echoed here in places — and Monroe’s performance is of another world entirely: our own. It’s refreshing, and a bit more of that energy might have made the proceedings a little more grounded and a lot more human.

The verdict: Greta isn’t without flaws. (One such flaw: it basically rubber-stamps “Mommy issues” across the screen in the first five minutes, then never really bothers to explore those ideas.) But it’s an experience, and one that’s hard to pin down. In a time when movies are all about who you can sell them to and how, Greta belongs in conversation with films like A Simple Favor and the 2018 Suspiria in its willingness to create its own weird little space, with its own weird set of rules. It won’t be for everyone. But those who follow it down its strange little alley will be rewarded with beautiful music, Isabelle Huppert, and a table-flip for the ages. See it with your mom. It’ll be weird. That’s what Greta would want.