TV Review: One Day at a Time Fills Season 3 With More Love, Laughs, and Understanding 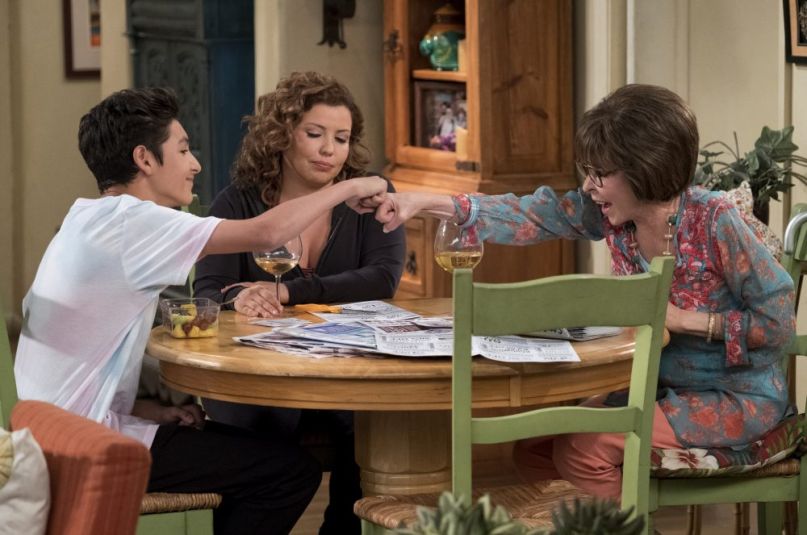 One Day at a Time (Netfix)

The Pitch: With another year comes another set of trials for the Alvarez family, a tight-knit Cuban-American clan whose deep love and affection for each other helps them navigate the muddy waters of a divided America. Mother (and Iraq war vet) Penelope (Justina Machado) still struggles to balance her PTSD with her risky decision to become a nurse practitioner, while spirited abuela Lydia (Rita Moreno) is trying to shake off the scare of her stroke last season, while continuing her platonic non-relationship with Penelope’s happy-go-lucky boss Leslie (Stephen Tobolowsky).

The kids have their own problems: Elena (Isabella Gomez) contemplates taking the next step with her non-binary partner Syd (Sheridan Pierce), and young Alex (Marcel Ruiz) finds himself experimenting with marijuana. And of course, there’s too-woke-by-half landlord and family friend Schneider (Todd Grinnell), whose years-long sobriety faces its greatest tests to date.

¡Viva familia!: As usual, the Alvarezes’ Latinx identity is front and center in One Day at a Time, a level of representation that makes the show’s frank discussions of race, identity, and politics feel more immediate than ever. Right off the bat, the season premiere mines a lot of laughs out of the labyrinthine series of grudges and dynamics felt by extended Cuban families, as the group attends a funeral for one of their many tias, which presents an opportunity for Lydia and Penelope to bury the hatchet with one aggrieved faction of the family (including Lydia’s sister, a glorious cameo from Gloria Estefan, who also sings the show’s catchy theme). Estefan makes a great foil for Moreno, who handily maintains her status as Certified National Treasure throughout the season.

Of course, the Alvarez family’s ethnicity is more than a source for quirky jokes about Cuban grudges and Catholic guilt. Showrunners Gloria Calderon Kellett and Mike Royce manage to deftly complicate standard sitcom premises with the complications of being a person of color in modern America. When Penelope finds out about Alex’s recreational drug use, it’s more than a chance for Machado to play harried sitcom mom: it’s an opportunity for the show to point out that even something as innocuous as smoking weed can have far greater consequences for him than for his white friends. Plot threads like these have positioned One Day at a Time as an unexpectedly groundbreaking sitcom, and season three assuredly maintains that tradition.

Sid-Nificant Others: While she gets a bit less to do this season, it’s still really nice (and capital-I Important) to see Elena love, breathe, and exist as a queer woman of color on television. Gomez is as effervescent as ever, and the audience gets to feel the joy of her new relationship with Syd vicariously through her — even as the two of them navigate things like pronouns and which variant on ‘romantic partner’ Elena feels comfortable calling them. With the reappearance of her biological father (James Martinez), who still has some issues about Elena’s sexuality to work out, it’s a great opportunity for Gomez — and Elena as a character — to show the audience the need for loud, proud LGBTQ visibility.

Schneid Remarks: Every One Day at a Time season deals with one big, bittersweet plot development. In season one, it was Elena’s quinceanera-turned-coming out; in season two, it was Lydia’s stroke and the fear that the family might lose her. For season three, the biggest emotional arc comes from Schneider of all people, a character who could have easily become the show’s irritating Sheldon-esque comic relief. To his credit, Grinnell has long been capable of balancing Schneider’s goofiness with sincere love for the Alvarezes, and the last few episodes — in which the specter of his drug and alcohol addiction rears its ugly head in unexpectedly tragic ways — are a real showcase for his abilities. These moments, and the Alvarezes’ incredible response to them, solidify his character as the member of the familia he always wanted to be. It’s tearjerking stuff.

We Live In An Anxiety: In a show filled to the brim with Issue Episodes, perhaps the finest half-hour of the season is its ninth episode, simply called “Anxiety”, in which the audience finally sees the day-to-day realities Penelope lives with as someone with an anxiety disorder. One Day at a Time has played with presentation in the past, but “Anxiety” frequently stops the action to show the audience the series of doomsday scenarios that happen during an anxiety attack — the color drains from the screen, characters turning nasty and self-doubting as Penelope (and Elena, in one instance) envisions herself failing as a mother or a nurse practitioner.

Even the coping mechanisms provided by her support group of fellow female vets can’t prevent it at times, huge ‘STOP’ signs in the room failing to keep her worst demons from clawing to the forefront of her brain. The device is simple but effective, and “Anxiety” is sure to be an eye-opening conduit for audiences who don’t quite understand how the condition works. It’s yet more evidence of One Day at a Time‘s zeal to instruct as well as entertain.

The Verdict: Three seasons in, and it remains a miracle that a multi-camera sitcom like One Day at a Time feels this heartfelt and groundbreaking. For dedicated viewers, the Alvarezes are more than a group of appealing TV characters; through sheer charm and warmth, the viewer’s hard-pressed not to think of themselves as part of the family. Each episode is confidently About Something without feeling like a ‘special episode,’ an alchemy few multi-cam sitcoms beyond this one have been able to achieve. Most importantly of all, this is a sitcom about warm, lovely people that you want to spend time with, episode after episode.

Where’s It Playing?: One Day at a Time goes and has a ball on Netflix for its third season on Friday, February 8th.