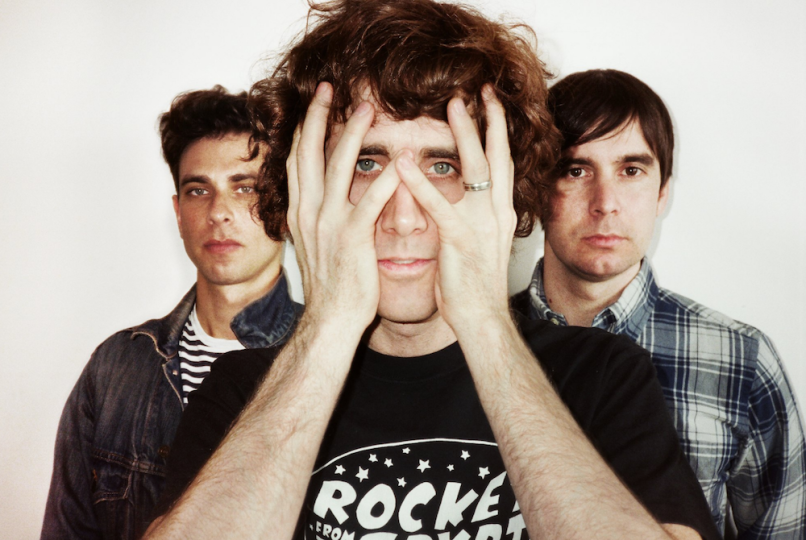 This past Wednesday, The Rapture broke their five-year silence to announce a pair of reunion shows. The New York three-piece, which found fame as part of the early aughts dance-punk revival, is set to perform at Brooklyn’s Music Hall of Williamsburg on April 30th, and then at the nostalgia-heavy Just Like Heaven Festival in Long Beach on May 4th.

Ahead of these comeback gigs, Consequence of Sound caught up with frontman Luke Jenner, who dished on the reunion news and what led up to the exciting announcement this week. He also talked about the possibility of teaming up again with label DFA Records for special concert events and — yes — even a new album.

In Jenner’s initial reunion post on Facebook, he mentioned the “long gritty road” of jugging family time and a music career. In his interview with me, Jenner tells me that his mission to find this delicate balance was one of the major reasons for the band’s breakup in 2014.

Jenner notes that he was going through a lot of other “personal revelations” at the time, many of which he couldn’t properly articulate or talk about with his other band members. As a result, his decision to leave the group was met with plenty of confusion and shock — so much so, that the split was never really officially addressed or announced publicly.

The frontman says he’s grown and is currently in a much better place, personally, now, and that this is what led to reunion talks. “I told them [the band] that I need to go over there and do this, and when I feel like I have my head wrapped around that, then we’ll talk about it [a reunion],” Jenner recalls. “Then it got to the point where it seemed plausible, I feel like I’m in a pretty good spot.”

Plans to reconvene didn’t happen overnight, however. According to Jenner, following the breakup, he and the rest of the band — Vito Roccoforte and Gabriel Andruzzi — ceased speaking for a good while. They eventually touched base, but only to attend group therapy sessions in hopes of repairing their relationships with one another, both personally and creatively.

“When you’re in a band, there’s two parallels going on,” Jenner tells me. “One where you’re like, ‘Hey, what’s up? How’s life?’, and then there’s the one where you’re asking, ‘Do you want to play this festival? Do you want to release this movie soundtrack?'” He says the business aspect of the group, when left uncontrolled and unbalanced, is what ultimately “steamrolled” his personal relationships with his bandmates.

Jenner and the rest of The Rapture are in touch more regularly these days, but he says they’re being particularly careful about the plans they make and how they decide to proceed with the band. “We’re starting to talk to each other, I don’t want to wreck that… I don’t wanna steamroll that.”

He relays an anecdote from two years ago, when The Rapture were pitched a really good offer to play a festival. Jenner and his bandmates were barely talking and, as a result, he felt it wouldn’t have worked out well. “I told them, ‘I don’t wanna be on stage with you hating my guts, that doesn’t feel right to me… there are a lot of things we still need to talk about,'” Jenner remembers.

With those talks now finally taking place, The Rapture are looking ahead. But Jenner is quick to emphasize that this isn’t merely a reboot of sorts. He’s a different person than he was in 2014, and the band is now operating in a much different space. “I think that was kind of the hardest thing to put across… it can’t be the way it used to be.”

Specifically, Jenner isn’t looking to become hugely popular, as is usually the case when a band emerges from hiatus status after many years. Since becoming a father, he’s come to value the importance of helping others achieve their dreams.

“I don’t want to win a Grammy, I don’t want to play Madison Square Garden… I wanna help other people do that,” he explains. “I’ve been working really hard on creating this new community, I just wanna be closer to the ground.”

That doesn’t mean fans won’t be getting new music from The Rapture, though. Jenner says they haven’t been begun writing anything yet, but that they’re all “certainly open” to the idea and receptive of plans that go beyond just these two reunion shows. “I would like to do this indefinitely and make new music,” he says, but is also careful not to set high expectations. “I think we’re all cautiously optimistic.”

When asked whether he’s heard from any of his dance-punk colleagues from the early 2000s since the reunion news broke, he tells me that he’s been meaning to talk more with the folks over at DFA, the label that released The Rapture’s last album, 2011’s In the Grace of Your Love. DFA co-founder James Murphy of LCD Soundsystem also had a hand in the group’s 2003 breakthrough album, Echoes. Jenner says that if The Rapture were to release a new album, it would be through DFA as they “owe” the label one more release.

While we await The Rapture’s next steps, revisit a pair of their biggest singles. If you’d like to own the band’s releases on vinyl, stop by ReverbLP.