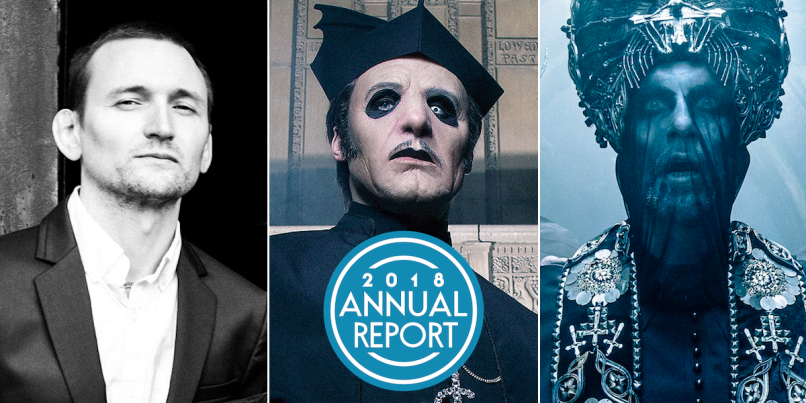 An eclectic and intriguing year for heavy music has come to an end, and it’s time to look back at the songs that stood out in 2018.

We recently posted our picks for the Top 25 Hard Rock + Metal Albums of 2018, and now we’re singling out the individual songs that struck a chord with us over the past 12 months.

From mainstream rock and extreme metal to experimental noise and a new wave of hardcore, and beyond, 2018 marked a breakthrough year for many young acts while a few veteran bands released their finest works in years.

It was tough narrowing down the list to 30 songs, as a number of solid tracks were painfully excluded, but with that said, here is the Heavy Consequence staff list of the Top 30 Metal + Hard Rock Songs of 2018.

Sounds Like: A futuristic musical journey powered by sludgy riffing in the style of Tony Iommi and Ritchie Blackmore.

Key Lyric: “Dark dreams they take so long to shake, erase a picture and another stays/ I’ve searched for all the ways to say, think I found a way”

Why It Matters: Whether you call it stoner rock, sludge metal, or whatever else, Dead Now are definitely a band to keep an eye on. Former Torche member Andrew Elstner fronts a trio that worships classic ’70s metal like Sabbath and Deep Purple all through a sound that’s thoroughly modern, as evidenced on the ethereal yet heavy “Powershapes”. —Spencer Kaufman

Sounds Like: Modern hard rock that hits you in the gut.

Why It Matters: “Disease” provides an anthem for those struggling in a time when mental health issues and addiction are at the forefront of our society. While radio ready, the song takes the listener into a dark place lyrically, as Beartooth frontman Caleb Shomo is not afraid to share his personal pain. —Spencer Kaufman

Sounds Like: An occult army marching to war while seeking a greater understanding of reality and eternity.

Key Lyric: “Knowing when to end a journey/ Is to recognize where it begins/ What we really seek is not here/ But on the other side of fear”

Why It Matters: Dimmu Borgir’s first album in eight years is a monument of symphonic black metal, and this song might be its most epic. Masterful melodies, a shifting song structure, and plenty of head-banging opportunities make “I Am Sovereign” beautifully brutal. —Scott Morrow

Sounds Like: A tumultuous roller-coaster ride that leaves you gasping for air at the end — and wanting to go for a second ride.

Key Lyric: “Draw a line painted with blood in the sand/ The only war we could never lose is at hand”

Why It Matters: Tremonti’s latest disc, A Dying Machine, is a concept album that tells the tale of the turn of the next century where humans and fabricated creatures, “vessels,” are trying to co-exist. Opening track “Bringer of War” paints the picture of the war unfolding ahead, with pummeling drums and Mark Tremonti’s stronger-than-ever vocals. —Anne Erickson

To Drink from the Night Itself

Sounds Like: The closing credits of a bad-ass new Dracula movie.

Key Lyric: “The anesthesia of repetition/ Let monotony and isolation reign/ Will our persistence fade like daggers?/ (Daggers) daggers of black haze”

Why It Matters: “Daggers of Black Haze” is a microcosm of To Drink from the Night Itself, which is the most melodic At the Gates record since Slaughter of the Soul. Its orchestral accents perfectly set up the hook-filled heaviness that follows. —Scott Morrow