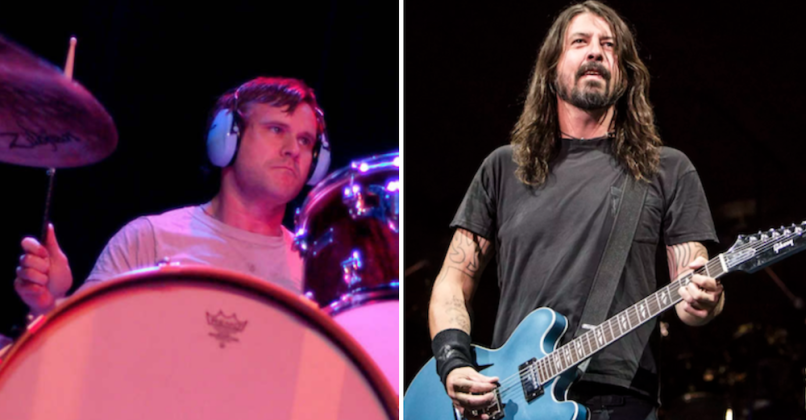 Sunny Day Real Estate drummer William Goldsmith hasn’t always had the kindest words regarding his tenure with Foo Fighters. He had some specifically unfriendly comments about frontman Dave Grohl just last year, calling him “a schoolyard bully” who creatively “raped” Goldsmith by largely cutting him out of 1997’s The Colour and the Shape. Now, Goldsmith has made new claims that Grohl is the reason SDRE hasn’t released a new album in 18 years.

In a Facebook post, Goldsmith asserts that “the greatest Sunny Day Real Estate record ever made remains silenced, abandoned and buried within the murkiest depths of David Grohl’s sock drawer.” The post is accompanied by what is presumably some unreleased SDRE material from said album.

To close the note, he makes a veiled reference to that Colour and the Shape controversy: “This is not the first time I’ve had my voice taken from me. But now This music hasn’t just been taken away from me anymore – now it’s been taken away from my children. Unforgivable.” No where does he clarify how Grohl may be stifling his creative output this time.

Goldsmith states that the music was recorded six years ago, which would have been some time after Sunny Day Real Estate’s most recent reunion tour. The band initially broke up in 1995, with Goldsmith and bassist Nate Mendel both going on to join Foo Fighters. When SDRE reunited two years later, Goldsmith returned while Mendel stayed to rock on with Grohl. There was another split in 2001, followed by a second reunion in 2009. Mendel took part in the second reformation, though he remained a member of Foo Fighters and is still one today.

Mendel has previously gone on record saying an attempt to record a reunion record after that ’09 tour “just fell apart.” The only song to see the light of day from those sessions was “Lipton Witch”, which appeared on a 2014 Record Store Day split effort with Circa Survive. However, in a statement delivered to Consequence of Sound, Mendel contradicts that Grohl has anything to do with any of Sunny Day Real Estate’s music remaining unreleased. “There is no truth to this story,” he said directly.

“Recently by way of objective ears I have been reminded of the fact that the greatest Sunny Day Real Estate record ever made remains silenced, abandoned and buried within the murkiest depths of David Grohls sock drawer. It’s both a shocking slap of reality and a swift kick in the balls. Gets harder to handle each time. Somehow someday – something has to be done. The tragedy of it is literally manifesting into physical pain. It honestly feels like someone has taken a part of me as a human being and locked it in a closet. My wife looked at me this evening and said ‘I am starting to understand what’s been haunting you for the past 6 years because it’s starting to haunt me as well.’ This is not the first time I’ve had my voice taken from me. But now This music hasn’t just been taken away from me anymore – now it’s been taken away from my children. Unforgivable.”