Our State of the Empire: A Lucasfilm Podcast hosts a panel and screening in Durham, NC 11/9 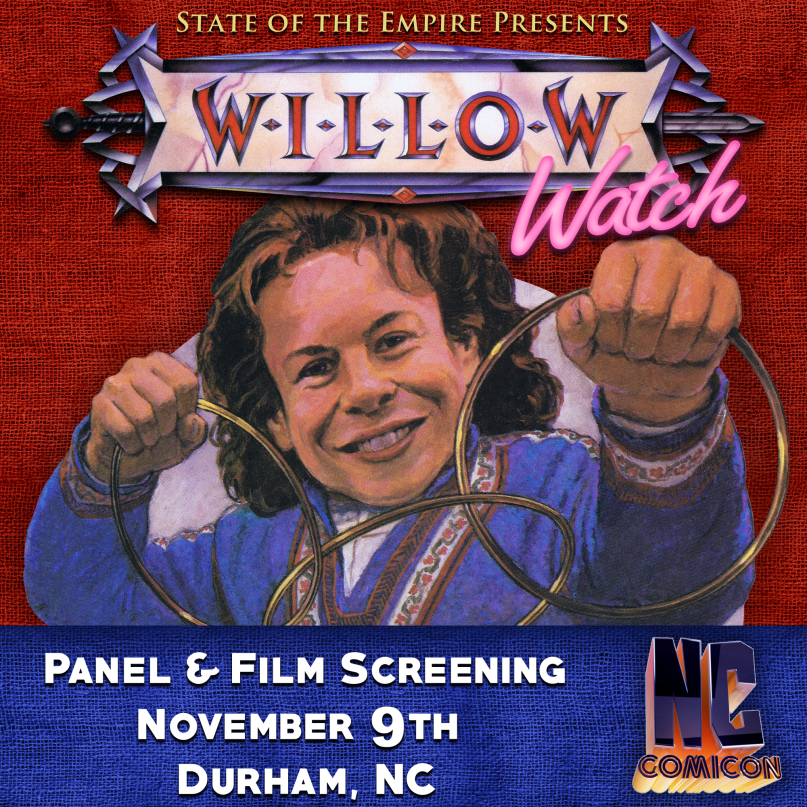 Helmed by George Lucas, directed by Ron Howard, and starring Warwick Davis, Val Kilmer, and Joanne Whalley, Willow paired character-driven humor with a a powerful, mythic story and ground-breaking visual effects. When the film debuted in 1988, it was met with minuscule numbers, but over the past three decades, its following has grown — from a pulsating lump of troll flotsam into a full-on raging Eborsisk of cult status and pop-culture influence.

Our Lucasfilm podcast, State of the Empire, has been celebrating Willow all year long in special Willow Watch episodes — exploring stories from behind-the-scenes and beyond the movie. They’ve delved into the film’s origins, dug into its long-forgotten expanded universe, dissected early drafts of the script, and yes, looked for signs of the now very real possibility there could one day be a “Willow 2″. But one thing remains: throwing a massive anniversary party to celebrate the big 3-0.

The day has finally arrived: November 9th, at North Carolina Comicon‘s Comiquest Film Fest, we’re screening Willow, in the historic Carolina Theater. Come early — because State of the Empire is preempting the screening with a special panel that’ll help you experience the film like never before. What’s Bavmorda’s backstory? Who’s Sorcha’s dad? What happens when you cast enough Nelwyns to actually populate a village? And… how many acorns were there again? Plus rare behind-the-scenes images and an exclusive intro from screenwriter, Bob Dolman. What’s more, everyone in attendance at the Friday screening will be given a free exclusive Willow print created by artist Tommy Lee Edwards (Marvel 1985, Mother Panic).

Forget all you know or think you know and adventure to Durham, North Carolina, for this once-in-a-lifetime Willow-bration!

Tickets are on sale now — including full weekend passes for North Carolina Comicon’s wealth of festivities, day passes, or multi-passes for the Film Fest (featuring other classics like Men in Black, Unbreakable, and Gremlins 2 — but won’t get you into our panel). The con features awesome guests like My Chemical Romance’s Gerard Way (now the brains behind DC Comics’ Young Animal imprint and Doom Patrol), author Chuck Palahniuk (Fight Club), and an all-star list of comic book writers and artists including our own Art Director/ Podcast Network Director, Cap Blackard, repping their animated series, Lightning Dogs, and hosting a number of panels and events in addition to Willow.

Our panel starts at 6 p.m. in Cinema One, immediately followed by Willow in the gorgeous Fletcher Hall at 7 p.m. If you’re easily shocked, please turn away, but for those of you made of stouter stuff than Burglekutt, – forget the bird, follow the river to North Carolina Comicon!