In his first late-night TV appearance since 2015, Dylan promotes his new whiskey brand 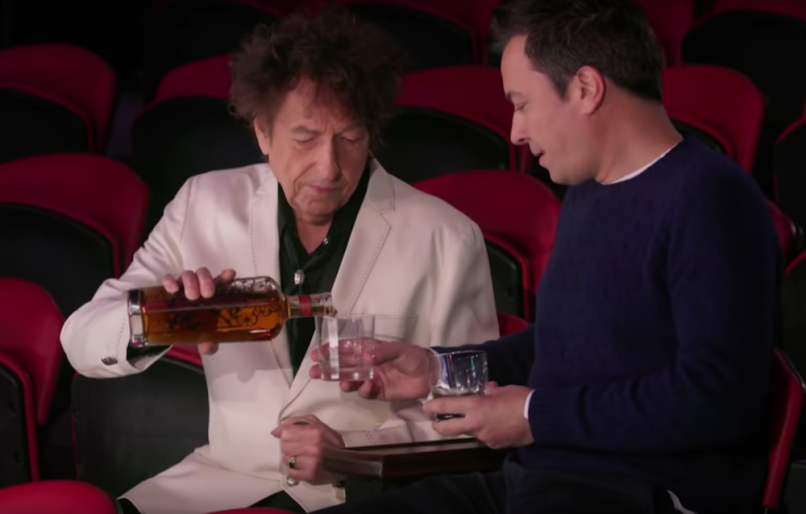 On Thursday’s episode of The Tonight Show, Bob Dylan made his first late-night appearance in over three years — but it wasn’t anything like you’d expect.

In the two-minute segment, Dylan takes host Jimmy Fallon to a private performance by the Big Apple Circus. They watch the acrobats from the stands as they sip Dylan’s new whiskey line, Heaven’s Door. It all seems a bit abstract and surreal, especially as the music legend is noticeably mute the entire time and Erik Satie’s “Gymnopédie No. 1″ plays in the background.

The whole thing ends with Dylan mysteriously disappearing and Fallon wondering whether it was all just a dream. “What was in that whiskey?” he asks.

Dylan launched his Heaven’s Door whiskey earlier this year. “We both wanted to create a collection of American whiskeys that, in their own way, tell a story,” he explained in a statement at the time. “I’ve been traveling for decades, and I’ve been able to try some of the best spirits that the world of whiskey has to offer. This is great whiskey.”

In related news, Dylan is the focus of our inaugural season of The Opus, a podcast series that explores legendary albums and their ongoing legacy: how they shape lives, shake rafters, and ingrain themselves into our culture.

Below, check out the most recent episode, in which contemporary songwriters Beth Orton and Kevin Morby join host Paula Mejía to unpack Dylan’s singular lyricism and More Blood, More Tracks, the epic collection of Blood on the Tracks outtakes that was released earlier this month.