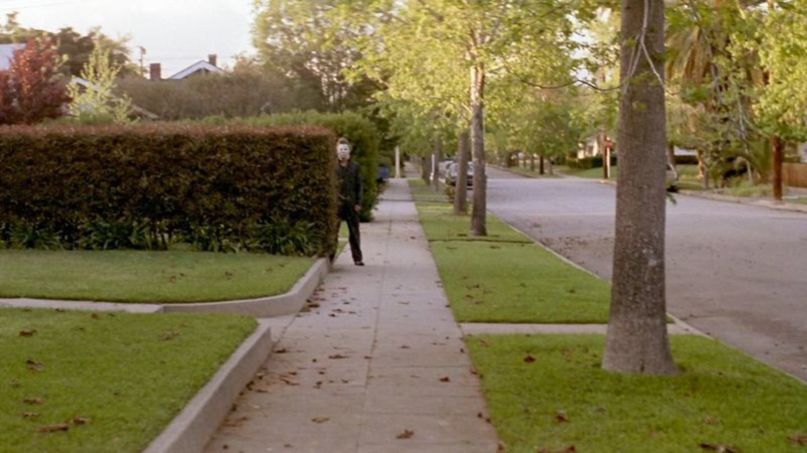 A soft gust of wind races down a street lined with rickety old Victorian houses, where glowing jack-o’-lanterns watch with vacant eyes and shutters clumsily wave behind them. There’s a chill in the air, teasing a Midwestern winter that’s to come, but there’s also an energy — laughter from costumed children traipsing down the street. Their shoes crunch over leaves that fall above them from giant oak branches dancing in the blue moonlight. It’s early yet on this Halloween, but the night has already begun. A row of sodium street lamps stave off the darkness, but the shadows persist, one in particular catches the attention of a young boy, peering from his home across the street.

“Laurie, the boogeyman is outside.”

John Carpenter’s Halloween is a comfortable movie. Set in the fictional small town of Haddonfield, Illinois, the story capitalizes on the sleepy nature of this agrarian American paradise, where the streets look safe, the houses look cozy, the people look friendly. Especially today, there’s an innocence at hand that’s achingly nostalgic, recalling a time when kids didn’t need to be chaperoned while trick or treating, when babysitters weren’t Netflix and a locked door, or when a maniac on the loose would elicit a gasp over a yawn. Halloween works each year because it’s the movie in which everyone comes home, a 91-minute reunion to a time when we weren’t already terrified to step outside.

That comfortability is key, and it’s earned. Although he leans on his teenage curriculum of Howard Hawks and Alfred Hitchcock films — the influences of both filmmakers on Carpenter have been massively paralleled over the years — the lineage to Ray Bradbury is unmistakable. Like 1962’s Something Wicked This Way Comes, and naturally 1972’s The Halloween Tree by name and holiday alone, Halloween traps its audience by selling them on the misguided notion that these are sleepy streets, where nothing ever happens. And much like Bradbury, Carpenter is patient in pulling away our warm blankets by slowly easing into the horror, simply by allowing the horror to slowly stalk us.

Yet it also helps that Carpenter and the late Debra Hill kept the horror straight and simple. Halloween is a neighborhood urban legend: What if the creepy kid who used to live in the creepy house down the street was real? Think back to all of the wild, spooky stories you heard and shared with friends growing up around your neighborhood — it’s an American pastime. Now, try to remember if anyone of them were even true or how many you might have shrugged off. Halloween subverts those doubts, which is why the film is so affecting after all these years later. We all have stories, to crib from Swingers, and we all share them. The comfort is knowing they’re probably all bullshit.

There are very few themes in life more terrifying than the unknown, but doubt can also be unnerving. Halloween is all about doubt. We see it through Donald Pleasence’s soft-spoken, albeit totally obsessed, Dr. Loomis, who’s surrounded by colleagues and officials scoffing at his warnings. We see it through Jamie Lee Curtis’ introverted bookworm Laurie Strode, whose friends laugh at everything she says. And finally, we see it through Brian Andews’ little Tommy Doyle, whose constant pestering about the boogeyman is haplessly written off as childhood grand delusions. From the very beginning to the very end, doubt is what gives agency to evil; it’s the shadow from which evil hides within.

These meditations on doubt say a lot about today’s culture, particularly at a time in America when doubt has infected every level of society. Because even in an age when information and cold, hard facts are instantaneous — or rather, “the truth is out there,” as Chris Carter popularized with The X-Files — doubt continues to plague and stunt us. What Halloween suggests is that this doubt is inherently evil itself, that we can’t be ignorant, and that we certainly can’t be blinded by our own comforts. Haddonfield isn’t a relic of a bygone era, no matter how much of it may appear to be ripped straight out of a Bradbury story, it’s the ensuing American nightmare. It’s the national boogeyman.

And we’re not only entitled to its scares, we’re a part of them.