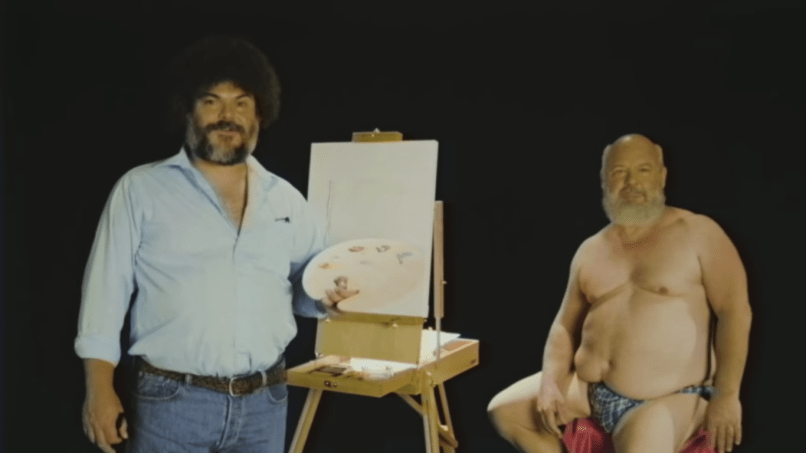 Jack Black’s The House with a Clock in Its Walls scared up an impressive box office pull this past weekend, but right now the actor’s focused on Tenacious D, his comedy-music project with Kyle Gass. The duo recently announced a new album, Post-Apocalypto, as well as a six-episode animated series of the same name to drop via their YouTube channel. Black drew every frame of every episode himself, demonstrating yet another of the performer’s many talents.

As an introduction of sorts to his technique, Black has channeled famous painter Bob Ross, the afro-topped man known for his “happy little trees,” for a new video entitled “How To Draw With Tenacious D”. Gass is on hand in a pair of skimpy undergarments, and Black encourages us to “explore his body together” as he sets paints aside from some sharpies. Gass, here dubbed Kage, eventually exposes all, with Black taking extra care to draw his bandmate’s penis, which he describes as resembling a “tuna can.”

Watch the hilarious clip below.

The series premieres on September 28th, with new episodes rolling out each Friday up until the album’s release. All six episodes also feature new Tenacious D songs from the band’s forthcoming album, and, as each episode goes up, a song from the episode will be made available via digital music platforms.

The album, which features Foo Fighters frontman Dave Grohl on drums, is due out November 2nd. Pre-orders are ongoing here.