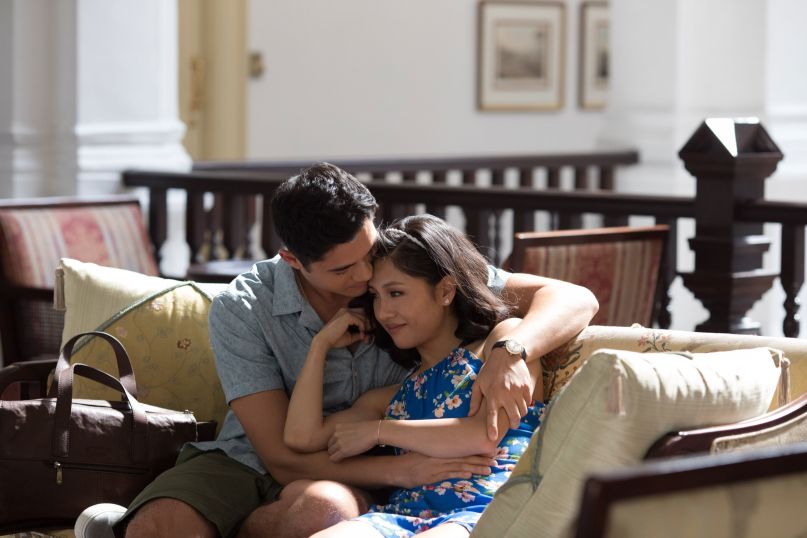 The Pitch: Rachel Chu (Constance Wu) would just about seem to have it all. She’s a successful economics professor with a specialty in game theory, her partner Nick (Henry Golding) is a total hunk and all-around good dude, and they’re about to take a trip to sunny, lavish Singapore to attend his brother’s wedding (and introduce Rachel to the family). However, a trip reveals that Nick isn’t just any handsome, well-off NYC bachelor. He’s the heir apparent of the Young dynasty, one of China’s richest families. As Rachel’s best friend Peik Lin (Awkwafina) points out, they’re far closer to royalty. Suddenly Rachel is whisked off into a world of opulent homes, island getaways, bitter jealousy, and the sort of top-dollar family secrets that could sink even a pairing as idyllic as Rachel and Nick.

Lifestyles of the Rich and Soon-To-Be Famous: Much of the hype surrounding Crazy Rich Asians has focused on the unlikelihood of a big-budget Hollywood production being built around an all-Asian cast, directed by an Asian filmmaker (Jon M. Chu), based on a hit novel by an Asian writer (Kevin Kwan), and aimed largely at Asian audiences, who’ve been served by so many rich global film traditions but far less so in the U.S. over the years. It won’t be long, however, until the story becomes one of how many stars wind up emerging from this film. For one, Wu has been doing solid work for some time now, but here she delivers the kind of radiant, charismatic turn that creates movie stars overnight. Rachel is very much an audience proxy for Chu’s foray into Singapore’s luxurious day and nightlife scenes, and her wonder is quickly replaced by the terror of being thrust into a situation she was left completely unprepared to handle. A lot is asked of Wu throughout the film, and she responds with the kind of genuine magnetism that can’t be feigned by a lesser performer.

She may be the film’s MVP, but she’s hardly its only standout. Golding is something of a handsome cipher; he rocks a million-dollar smile, but fully inhabits the tradition of the handsome, near-perfect male lead who’s helpfully oblivious to the machinations of the plot. It’s not exactly one of the film’s juicier roles, but Golding brings a great deal of personality that elevates Nick beyond a story detail. Awkwafina continues her breakout summer as the kind of friend who’s great to have around even when she’s knowingly overstaying her welcome. Gemma Chan, as Nick’s big-hearted sister Astrid, is equally compelling as a woman whose total assurance about herself and her life causes the biggest problems at home. And then there’s Michelle Yeoh, whose Eleanor Young rules over the family with an immediate and decisive clenched fist. In Yeoh’s ever-skilled hands, Eleanor is less a stern maternal stereotype than the film’s most well-articulated character after Rachel, a woman at her own transitional moment in life who worries for the future of her family and the erosion of traditions. That doesn’t mean she has a hard time cutting anyone in her path down without more than a single glance, though.

The Verdict: Like so many romantic comedies and/or melodramas about the highs and lows of people for whom money is no object, Crazy Rich Asians is explicitly in the business of lovingly rendered wealth porn, and your enjoyment of it will largely depend upon your tolerance for that sort of thing. It’s a long-form tourism video for the richest oceanside parts of Singapore as much of a movie, and a celebration of unchecked decadence and privilege. Having said that, it’s also a genial enough movie to (mostly) overlook those considerations, or at least breeze past them with frequently arresting splashes of primary color and a sense of breathless editorial verve. Chu helms Crazy Rich Asians with the kind of breezy uptempo style that becomes the film’s engine before long.

The romantic comedy beats are familiar enough, but the ways in which the film attacks them gives it a subversive shade that nicely compliments an otherwise straightforward fish-out-of-water story. There are a handful of riffs on the global perception of China as impoverished and repressed alongside a number of richly observed moments (a late-game confrontation over a game of mahjong), and as it passes through mansions and beach hotels one after the next, Crazy Rich Asians emerges as the kind of hyper-specific comedy that winds up reaching a much wider audience through the authenticity of the emotions from scene to scene. Everything from Rachel’s Chinese-American parentage to her unassuming background makes her a target for the many social climbers of Singapore’s elite, and when that extends up to and including certain members of the Young family, the film starts to tangle with fairly heady stuff for a film this hyper-indulgent.

Tradition comes into regular conflict with dreamy modernity throughout Crazy Rich Asians, and it makes sense given that the film plays that conflict out through Rachel and Eleanor, through Eleanor and Nick, and through the broader statement the film represents in its entrance into the global mainstream market place. It’s a riff on the long-standing tradition of the secret prince fairy tale, but it’s also an unusually thoughtful take on cross-cultural difference in that it pokes fun at the bizarre customs of other parts of the world without turning them into a punchline. Like the great romantic comedies, it’s made with a great deal of visible affection both in front of and behind the camera, and the film itself comes to exude that same welcoming energy. Even if you’re not the type of viewer Crazy Rich Asians is for, don’t be surprised one bit if you find yourself hooked in before it’s through charming and dazzling you.

Where’s It Playing?: Crazy Rich Asians is out around the world now in wide release, on all the biggest and loudest screens.